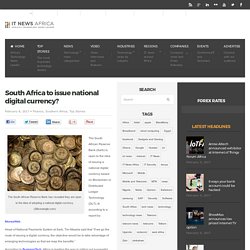 (Siliconangle.com) The South African Reserve Bank (Sarb) is open to the idea of issuing a national digital currency based on Blockchain or Distributed Ledger Technology (DLT), th according to a report by MoneyWeb. Head of National Payments System at Sarb, Tim Masela said that “If we go the route of issuing a digital currency, the objective would be to take advantage of emerging technologies so that we reap the benefits.” According to BusinessTech, Africa is leading the way in rolling out successful national digital currencies, as Tunisia and soon Senegal will both have their own versions of digital national currencies. 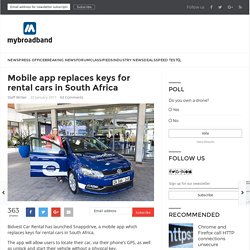 The app will allow users to locate their car, via their phone’s GPS, as well as unlock and start their vehicle without a physical key. Once customers are at their vehicle, they press the Unlock button in the app. To start the car’s engine, they press the Start button. Users will also receive an SMS prior to when the car is due back – which provides an opportunity for the customer to extend their rental period should they wish to. Virtual learning heralds a new era of education in South Africa. NB-IoT technology lands in Africa with MTN smart water solution. How secure is South Africa's "internet of things"? Everything from your security system to your kettle is being connected to the internet, and that is, in many ways a good thing: feature-packed, remote controlled devices talking to each other can make your world a little bit more convenient and intelligent. 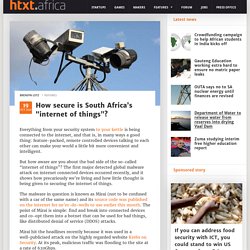 But how aware are you about the bad side of the so-called “internet of things”? The first major detected global malware attack on internet connected devices occurred recently, and it shows how precariously we’re living and how little thought is being given to securing the internet of things. The malware in question is known as Mirai (not to be confused with a car of the same name) and its source code was published on the internet for ne’er-do-wells to use earlier this month. The point of Mirai is simple: find and break into connected devices and co-opt them into a botnet that can be used for bad things, like distributed denial of service (DDOS) attacks.

South Africa: A Phone APP for Pregnant Teens? Press release Just over one in 10 South African girls fall pregnant while still in their teens. 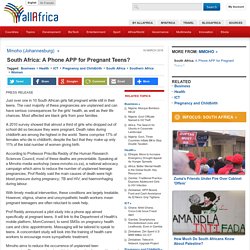 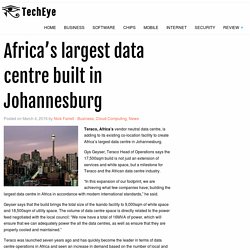 Gys Geyser, Teraco Head of Operations says the 17,500sqm build is not just an extension of services and white space, but a milestone for Teraco and the African data centre industry. 7 Most Active Investors In African Tech In 2015. African tech startups received a total amount of funding in excess of US$185,785,500 in 2015, according to data compiled by Disrupt Africa. 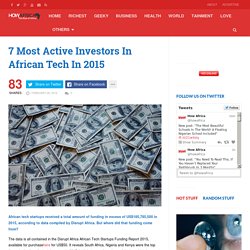 But where did that funding come from? The data is all contained in the Disrupt Africa African Tech Startups Funding Report 2015, available for purchasehere for US$50. It reveals South Africa, Nigeria and Kenya were the top three destinations for tech investors in 2015, both in terms of numbers of deals and total amount of funding. Funding came from both Africa and abroad, with various investors putting amounts large and small into startups across the continent. South Africa: Ambitious Project to Teach Rural People to Code. By Benita Enoch Martha Phora matriculated with grades good enough to get her into an IT college. 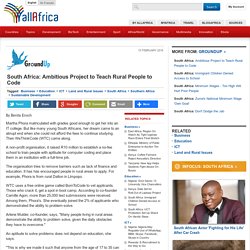 But like many young South Africans, her dream came to an abrupt end when she could not afford the fees to continue studying. Then WeThinkCode (WTC) came along. A non-profit organisation, it raised R10 million to establish a no-fee school to train people with aptitude for computer coding and place them in an institution with a full-time job. Africa’s largest electricity producer aims to create an Uber-like electricity app. By: Aviwe Mtila Last Updated: 22 January 2016|15:17 GMT The General Manager of the centre, Barry MacColl, says the power utility is researching ways of producing cheaper electricity. 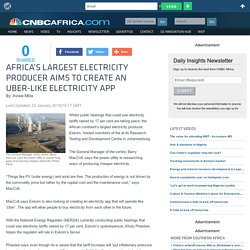 Photo: Flickr Whilst public hearings that could see electricity tariffs raised by 17 per cent are taking place, the African continent’s largest electricity producer, Eskom, hosted members of the at its Research, Testing and Development Centre in Johannesburg. More South Africans shopping online this Christmas. While many South Africans have braved brick-and-mortar retailers in search of gifts this Christmas, there is an increasing number of people choosing to shop online. 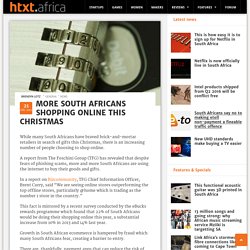 A report from The Foschini Group (TFG) has revealed that despite fears of phishing scams, more and more South Africans are using the internet to buy their goods and gifts. In a report on Bizcommunity, TFG Chief Information Officer, Brent Curry, said “We are seeing online stores outperforming the top offline stores, particularly @home which is trading as the number 1 store in the country.” This fact is mirrored by a recent survey conducted by the eBucks rewards programme which found that 22% of South Africans would be doing their shopping online this year, a substantial increase from 10% in 2013 and 14% last year. Growth in South African ecommerce is hampered by fraud which many South Africans fear, creating a barrier to entry. There are, thankfully, payment apps that can reduce the risk of online credit card fraud. WeChat SA launches mobile wallet: includes P2P payments, SnapScan integration. By Stuart Thomas: Senior Reporter on 24 November, 2015 100 WeChat South Africa on Tuesday announced the launch of WeChat Wallet, a mobile money offering that allows for peer-to-peer money transfers, the purchase of prepaid electricity and airtime, and the ability to cash out at retailers among other things. 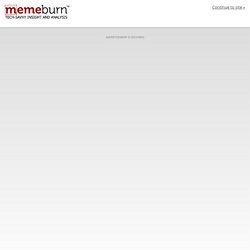 According to WeChat SA head Brett Loubser, the service has been in the works for a little while now, and isn’t just a copy-paste of the mobile platform’s offerings in other markets, such as China. How much South Africans spend online. Cape Town to offer free wifi on buses. Instant messaging shows huge growth in South Africa. Downloading a podcast‚ dating and games have joined the popularity of instant messaging as massive growth areas in South African Internet activity. The Institute of Race Relations (IRR) on Tuesday released a report on South Africans’ changing Internet use over seven years: from 2007-2014. Forty percent of adults – defined as people over the age of 16 – used their cellphone connectivity last year were using instant messaging‚ making this the most popular use of the Net‚ followed by Facebook and searching (both at 27%). Checking the weather and email are used by 13% of adults – less than the 15% of adults online who are now using the Internet for games.

More South Africans log on via mobile. South Africa: Internet users to reach 27 mln by 2019. South Africa is expected to see a rise in internet traffic as more people switch to smartphones and smart devices. SA’s Wallettec clocking up pan-African integration deals. South African mobile wallet integration startup Wallettec has signed integration deals with providers in South Africa, Kenya, Tanzania, Ghana, Nigeria, Namibia and Zimbabwe since its launch in October of last year, and plans to increase merchant usage and revenues in 2015. Wallettec is a platform provider that specialises in mobile wallet integrations, currently used by cryptocurrencies, retailers, mobile banking institutions and other businesses looking to provide their clients with a better experience in banking and payments. South Africa’s police car of the future. Vodacom, in partnership with Samsung, has created the police car of the future, using fixed and mobile network infrastructure.

The mobile and technology firms are showcasing how innovation and technology can support the South African Police Service. Vuyani Jarana, chief officer at Vodacom Business said: The information that we’ll be able to put at the disposal of the police, combined with coordination from a centralised control centre, will mean a step change in capabilities. SA sees online Retail explosion but Consumers still prefer physical Buying. South Africa is poised for explosive growth in online shopping, but the majority, regardless of age, still prefer to visit a physical shop to buy products. Digital innovation is undoubtedly reshaping consumers’ buying behaviour. But it seems that most consumers, whether they live in Perth, Pittsburgh or Pretoria, are still using the Internet primarily to browse and not to buy.

That was the message from local and international retail industry players who gathered at the annual congress of the SA Council of Shopping Centres in Cape Town recently. Broll Property Group’s Retail Consumer Survey 2014, which was released at the congress, reveals that 95% of SA shoppers still prefer to visit an actual store when buying products. S.Africa's internet revenue estimated to hit R71.6 bln in 2018. Increased Internet access will generate more consumer spend than any other media in the next five years, PwC report said. Wonderful Engineering/African Brains The report on the South African entertainment and media industry added the country’s entertainment and media market is expected to grow by 10.2 per cent compounded annually (CAGR) from 2014 – 2018 to a value of 190.4 billion rand. Eight new innovative South African start-ups - htxt.africa.

Cape Town played host to another Lean Startup Machine event over the weekend, where teams, entrepreneurs and innovators participate in intensive workshops to learn how to build what their customers want. LinkedIn South Africa Has Some Fast Growing Industry Leaders [Infographic] - Social News Daily. LinkedIn is not having Facebook type stock issues, in fact the company is reporting more than 600 times earnings and its shares are hovering right around $100, even on the worst of stock market days. Throw in record quarterly and yearly profits and rapid international expansion and its easy to see the business appeal of the social network. What might surprise some observers is the rate at which certain industry’s are expanding internationally, specifically in South America.

Can Africa lead the creative revolution globally? While competition for brand spend in Africa is highly competitive there remains a great need for sharing and insights amongst industry players across Africa, hence the broadening of the Aegis Media Thought Leadership Digibate platform into Africa whereby sharing can be done not only by the media/marketing industry players, but also from client perspectives. The Digibate panel represented three key perspectives into the African consumer marke: agency, client and a media perspective.