US Federal Reserve remains 'patient' on interest rates. Russia to spend $35bn on economy plan. 28 January 2015Last updated at 07:40 ET The Russian government is to spend at least 2.34 trillion roubles ($35bn, £23bn) to try to stave off an economic crisis, following a collapse in oil prices and the value of the rouble. 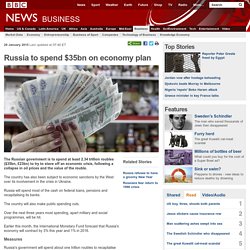 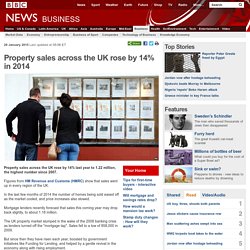 Figures from HM Revenue and Customs (HMRC) show that sales went up in every region of the UK. In the last few months of 2014 the number of homes being sold eased off as the market cooled, and price increases also slowed. Mortgage lenders recently forecast that sales this coming year may drop back slightly, to about 1.18 million. UK economy records fastest growth since 2007. 27 January 2015Last updated at 06:16 ET The UK's economy grew by 2.6% last year, the fastest pace since 2007 and up from 1.7% in 2013, official figures have shown. 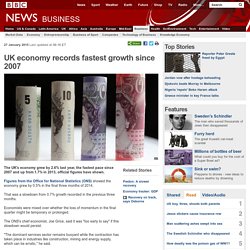 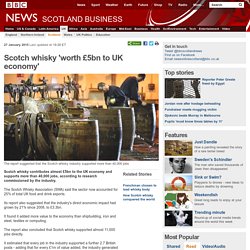 The Scotch Whisky Association (SWA) said the sector now accounted for 25% of total UK food and drink exports. Its report also suggested that the industry's direct economic impact had grown by 21% since 2008, to £3.3bn. It found it added more value to the economy than shipbuilding, iron and steel, textiles or computing. The report also concluded that Scotch whisky supported almost 11,000 jobs directly. It estimated that every job in the industry supported a further 2.7 British posts - adding that for every £1m of value added, the industry generated another £520,000 across the UK, through haulage, packaging and other aspects of the supply chain. 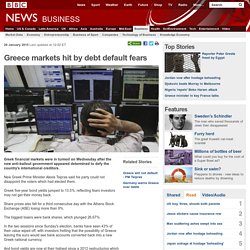 New Greek Prime Minister Alexis Tsipras said his party could not disappoint the voters which had elected them. Greek five-year bond yields jumped to 13.5%, reflecting fears investors may not get their money back. Share prices also fell for a third consecutive day with the Athens Stock Exchange (ASE) losing more than 9%. The biggest losers were bank shares, which plunged 26.67%. In the two sessions since Sunday's election, banks have seen 43% of their value wiped off, with investors fretting that the possibility of Greece leaving the euro would see bank accounts converted back into a new Greek national currency. And bond yields are now at their highest since a 2012 restructuring which wrote off a large proportion of Greek debt held by private investors. Eurozone needs to 'share risks', warns Bank governor. 28 January 2015Last updated at 13:55 ET By Katie Hope Business reporter, BBC News Bank of England governor Mark Carney has warned the current structure of the eurozone puts it in an "odd position". 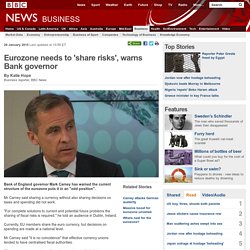 Mr Carney said sharing a currency without also sharing decisions on taxes and spending did not work. "For complete solutions to current and potential future problems the sharing of fiscal risks is required," he told an audience in Dublin, Ireland. Currently, EU members share the euro currency, but decisions on spending are made at a national level. Mr Carney said "it is no coincidence" that effective currency unions tended to have centralised fiscal authorities. "European monetary union will not be complete until it builds mechanisms to share fiscal sovereignty," he said. "Without this risk sharing, the euro area finds itself in an odd position," he added. China overtakes US for foreign direct investment. 29 January 2015Last updated at 21:25 ET China is the number destination in the world for foreign investment, according to the UNCTAD China has overtaken the US as the top destination for foreign direct investment (FDI), for the first time since 2003. 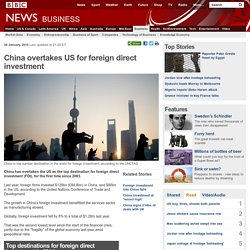 Last year, foreign firms invested $128bn (£84,8bn) in China, and $86bn in the US, according to the United Nations Conference of Trade and Development. The growth in China's foreign investment benefitted the services sector as manufacturing slowed. Globally, foreign investment fell by 8% to a total of $1.26tn last year. Denmark, Deutschland and deflation: strange times for EU. 29 January 2015Last updated at 14:06 ET By Andrew Walker BBC World Service Economics Correspondent Denmark has been tying its currency, the krone, to the euro. 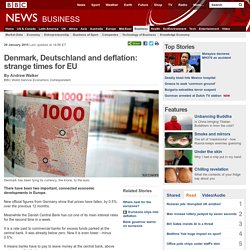 There have been two important, connected economic developments in Europe. New official figures from Germany show that prices have fallen, by 0.5%, over the previous 12 months. Greece economy: PM Tsipras seeks to placate creditors. 31 January 2015Last updated at 17:20 ET Mr Tsipras (R) said it was still early days for negotiations with creditors Greek Prime Minister Alexis Tsipras has said he is confident that agreement can be reached with creditors over repayment of Greece's debts. 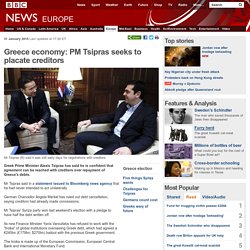 Mr Tsipras said in a statement issued to Bloomberg news agency that he had never intended to act unilaterally. German Chancellor Angela Merkel has ruled out debt cancellation, saying creditors had already made concessions. Mr Tsipras' Syriza party won last weekend's election with a pledge to have half the debt written off. Its new Finance Minister Yanis Varoufakis has refused to work with the "troika" of global institutions overseeing Greek debt, which had agreed a €240bn (£179bn; $270bn) bailout with the previous Greek government. The troika is made up of the European Commission, European Central Bank and International Monetary Fund. US growth slows in fourth quarter. 30 January 2015Last updated at 10:10 ET Lower fuel prices put more money in consumers' pockets in the last three months of 2014 The world's largest economy expanded less than expected in the final three months of 2014 despite lower fuel prices boosting consumer confidence. 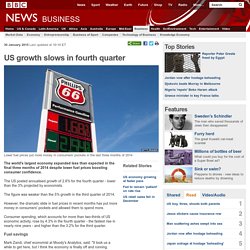 Russia cuts interest rates from 17% to 15% Eurozone deflation gathers pace in January. North Sea oil summit to hear pleas for action. 31 January 2015Last updated at 19:20 ET Industry body Oil and Gas UK is to call for "meaningful action" from government in order to tackle major challenges facing North Sea operators. Chief executive Malcolm Webb will tell an oil and gas summit in Aberdeen on Monday that "an unpredictable and harmful business environment" has put the sector "at great risk". The body wants urgent tax cuts amid falling oil prices and rising costs. It also wants a new oil and gas regulator in place as soon as possible. The UK Treasury said it was working with industry leaders "as a matter of priority" to address the challenges the industry faces. The summit, which has been organised by Aberdeen City Council, will be attended by local and national politicians as well as industry and union representatives.