People For the American Way 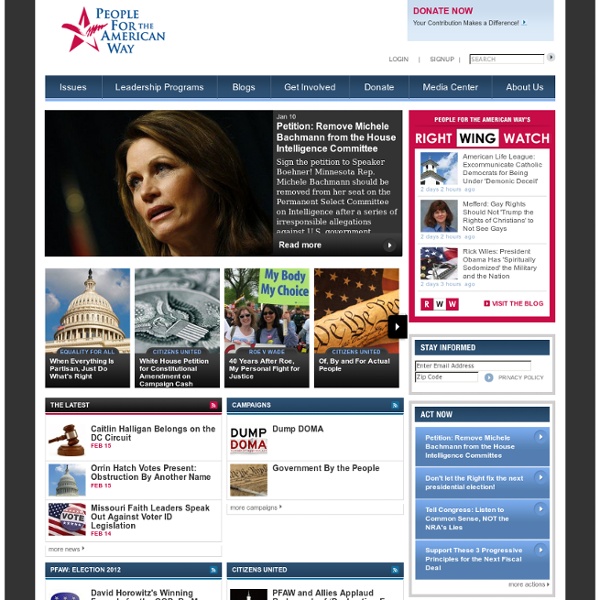 Related:  US of A Economy

Whistle-Blowers’ Lawyers Donate to Obama Campaign Lawyers in the tight circle who specialize in filing fraud claims with the federal government on behalf of clients with evidence of wrongdoing have raised more than $3 million so far for . The government, meanwhile, has paid out $1.6 billion to whistle-blowers during his tenure, with law firms taking a cut in some cases of up to 40 percent of the proceeds. The lawyers have contributed directly to Mr. Their support comes as Mitt Romney, the Republican presidential nominee, has called for repeal of the Dodd-Frank Act, which imposed new oversight of the financial services industry and expanded the government’s whistle-blower program to the , which has set aside $430 million for payouts. “The risks are enormous there will be real pullback because of pressure from the industry that has paid billions in penalties,” said John R. The U.S. Some of the lawyers in the field, including several from Mr. “We have had hundreds and hundreds of inquiries,” said Mr. Mr. Mr.

PublicChristian The 4 Percent Solution - By James Jay Carafano Even though the first U.S. presidential debate was not about national security, the military made a brief but striking appearance, with candidate Mitt Romney lamenting what he charged were President Barack Obama's "dramatic cuts to our military." He said: "I do not believe in cutting our military. I believe in maintaining the strength of America's military." Obama, for his part, countered that Romney wanted "$2 trillion in additional military spending that the military hasn't asked for." The stark contrast raises the question: Is the United States investing adequately for its future defense? Obama's long-term plans place defense last among the major priorities of federal government spending. In contrast, Romney has repeatedly stated that he thinks annual defense spending should rise to about 4 percent of GDP -- or about $720 billion a year. The answer to that question is -- like everything pertaining to the Pentagon's budget -- complicated. But even the QDR lowballed real defense needs.

Today's Ideas & Actions Obama’s Numbers Summary For more than a year, we’ve been pointing out on a regular basis how President Obama, his allies and his critics all misuse or even fabricate statistics to give voters a skewed picture of reality. This time we’ll just offer the accurate numbers. Here — in a graphic suitable for framing, embossing, emailing to friends or posting on social media — is an accurate statistical picture of key changes that occurred since Obama took office in January 2009. The indicators are all derived from the most authoritative and up-to-date sources available. We’ve included the good, the bad and the indifferent — a booming stock market, a plunge in “real” (inflation-adjusted) household incomes, and a jobless rate that is exactly where it was when Obama took office. Opinions will differ on how much credit or blame a president deserves for things that happen during his time in office. And some of the numbers here don’t reflect very recent changes. Analysis Unemployment & Jobs Stock Market Federal Debt Guns

Anti-Apartheid Activist Helen Suzman Dies Former South African politician and anti-apartheid crusader Helen Suzman, a white woman who was once the only member of parliament to openly oppose the system of racial separation in South Africa, died Thursday at her home in Johannesburg. She was 91. BBC: Archbishop Desmond Tutu said his country owed her an enormous debt in the struggle against apartheid. “She really was indomitable,” he said. If you have trouble leaving a comment, review this help page.

Banks See Home Loans as Gateway to Big Gains Gary Cameron/ReutersWells Fargo, one of the country’s top mortgage lenders. Its results will help shed light as to the future of the current boom. 8:35 p.m. | Updated Federal stimulus has ignited a boom in mortgage refinancing, benefiting both homeowners and banks. And the good times could continue as the government steps up its support of the broad housing market. The proof will be in the profits. On Friday, Wells Fargo and JPMorgan Chase, the top two mortgage lenders in the country, are scheduled to report quarterly earnings. “We expect mortgage revenue to continue to be elevated in the third quarter and possibly into next year,” said Jason Goldberg, a banking analyst at Barclays. In the third quarter, banks probably originated as much as $450 billion of home loans, according to estimates by Inside Mortgage Finance, a publication that tracks the industry. Justin Sullivan/Getty ImagesA branch of JPMorgan Chase in Manhattan. Mr. There are more immediate concerns, though.

The Myth of U.S. Manufacturing Decline Pols Make Dangerous Pitch of U.S. as Victim by JOHN V. WALSH “We are not making stuff anymore in America,” is the word on the street. Let’s take a look at the facts. America manufacturing has not been decreasing – it has been increasing. What about jobs, then? See also: and Since 1947 the U.S. has seen persistent growth in domestic manufacturing and the rate of growth has in fact increased since the rapid growth of China’s manufacturing in the 1990s. Notice that the automation has been gaining momentum in the last decade with a precipitous job loss even before the economic crisis of 2008. Let us consider some of the consequences of all this for the present moment in our political life. Why the silence on this matter amongst “progressive” politicians? What about exports? This false view of America’s position in the world in fact quite is quite dangerous. John V.

Is Housing About to Tank? Well, what do you know; mortgage applications have fallen off a cliff. According to the Mortgage Bankers Association (MBA) loan applications decreased by 12 percent on a seasonally adjusted basis from one week earlier “registering the biggest percentage decline in a year as demand for both purchase loans and refinancings tumbled.” But how can that be, after all, the experts assured us that the Great Housing Rebound of 2012 was underway? They couldn’t be wrong, could they? Uh huh. For the last few months there have been a number of factors that have helped to nudge prices higher than they should be. Another reason why prices have recovered is because Uncle Sugar has been dishing out more perks to private equity and other fatcat investors through the Foreclosure-to-Rental scam. Here’s the scoop from Dr Housing Bubble: “Renting out foreclosed homes has increasingly emerged as an investment opportunity for Wall Street. A “closed loop system”. Wrong. Whoa. Here’s more from the Atlanta Fed:

Related:
Related:  US of A Economy