Library of Economics and Liberty 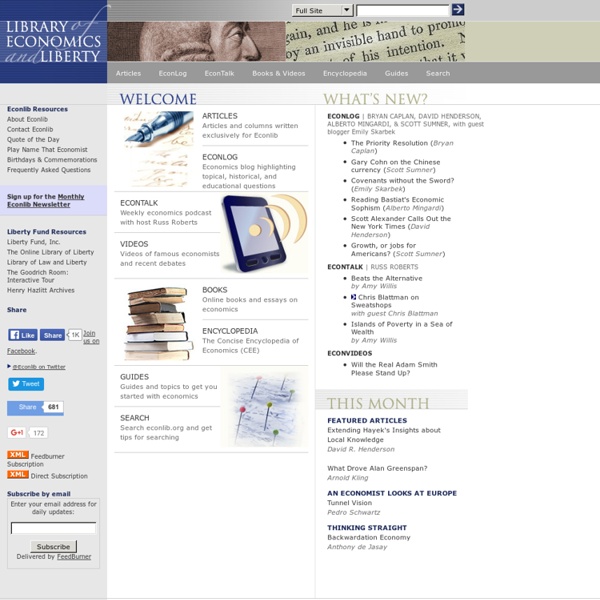 Measuring Worth - Measures of worth, inflation rates, saving calculator, relative value, worth of a dollar, worth of a pound, purchasing power, gold prices, GDP, history of wages, average wage Measures of Worth Lawrence H. Officer and Samuel H. Williamson Clearly, intrinsic values, objects, or events are difficult, if not impossible, to measure in money terms.

Economic Goods – definition and examples An economic good is a good or service that has a benefit (utility) to society. Also economic goods have a degree of scarcity and therefore an opportunity cost. This is in contrast to a free good (like air, sea water) where there is no opportunity cost – but abundance. Free goods cannot be traded because nobody living by the sea would buy seawater – there is no point. However with economic goods where there is some scarcity and value, people will be willing to pay for them. A Thanksgiving Cornucopia of Wrongest Products We could almost throw in the 1000 thread count towel and just admit we’ve been insurmountably topped in the Wrongest Product Awards competition. First came the suggestion from a reader following our nomination of the lighted pillow spied in a local outpost of a chain store. (local chain store = oxymoron?) He noticed the proud and iconic “As Seen on TV” logo and mentioned he’d once survived a visit to the As Seen on TV store. (We didn’t even know there was such a thing.

Want vs. Need: Basic Economics Part 1 Want vs. Need: Basic Economics Part 1: Basic Wants and Needs One of the most basic concepts of economics is want vs. need. CSR Reports CSR Reports feature and link to recently published, non-financial Corporate Social Responsibility and Sustainability reports. The CSR Reports page also lists any press releases associated with the publication of a given report. Reports are associated with an issuing CSRwire member. Wealth Management Another week of mixed economic news did not deter equity markets from climbing. The Standard & Poor’s 500 finished last week at a record high of 1859, the Dow Jones Av-erage closed at 16,321, and the Nasdaq Composite ended at 4308. Contrary to expectations that interest rates might rise sharply as the Fed pulled back from its bond buying program, the ten-year Treasury finished the week with a yield of 2.65% Crude oil was up to 102.59, and gold is staging a comeback after a disappoint-ing 2013 – closing at 1328.20. Consumer confidence was up in January, but GDP growth was revised downward to 2.4% for the fourth quarter of 2013.