Safaricom is launching the e-commerce platform Masoko which will join the ranks of Kilimall International, OLX, and Jumia — Quartz. If you follow the right accounts for young African tech entrepreneurs on Twitter, it can feel like there’s a never ending debate about who gets funding or not in Africa. 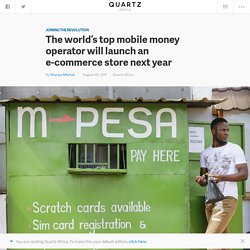 Like many Twitter debates the 140 characters and even the endless threads don’t capture all nuance of the issue, but while many of those debates have grown, founders from one sector of the startup space have been more positive than most: fintech. Take Flutterwave, a payments company which builds infrastructure to ease processing payments across Africa, it’s just raised $10 million in its Series A round. It’s one of the largest Series A rounds by an African startup. Significantly, the round was led by leading Silicon Valley venture capital funds Greycroft and Green Visor Capital, with participation from Y Combinator and Glynn Capital. It helps that Flutterwave was co-founded by Iyin ‘E’ Aboyeji, who has a track record, and star power, as a co-founder of developer training company, Andela. Kenya: Nairobi Nets Sh12b Through E-Payment. By Lillian Mutavi Nairobi City digital payment platform, Ejiji, has increased revenue collection to Sh12.7 billion up from Sh7.7 billion in 2013. 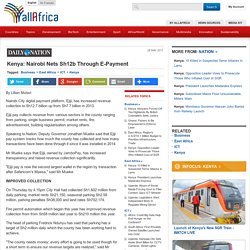 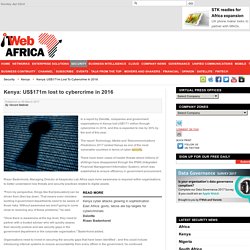 On-demand tech based cleaning service taking off in Nairobi. Kenya introduces digital learning tools to school going children. East Africa's Tea Trade Auction Set To Go Digital. The automation is expected to reduce the tea trading cycle by about 65% from the current 45 - 60 days to less than one month. 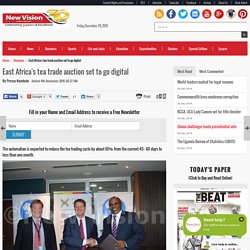 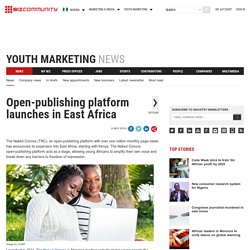 The Naked Convos open-publishing platform acts as a stage, allowing young Africans to amplify their own voice and break down any barriers to freedom of expression. Launched in 2011, The Naked Convos is Nigeria’s leading website giving young people the opportunity to tackle politics, relationships, sexuality, religion, sports, finance, feminism and more through their own lens and in their own words. The aspirations, ideas, and opinions on The Naked Convos (TNC) foster a vibrant conversation and often come back into the wider public through plays, web-series and anthologies, truly reflecting what it means to be young and African today.

The Naked Convos (TNC) offers to pay every single contributor for their writing through a calculated algorithm that takes into account both the number of hits on each post and the comments. Kenya establishes US$8m geospatial data centre. Published on 15 November 2016 By Vincent Matinde At a cost of Kshs 800 million (US$8m) Kenya could have its first geospatial data centre by June next year, to host land data and mapping information, according to Cabinet Secretary for Lands, Dr Jacob Kaimenyi. 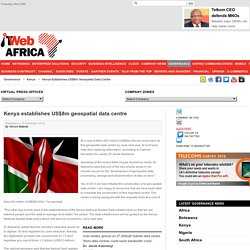 Speaking at the recent State House Summit on lands, Dr Kaimenyi said that one of the key priority areas in his ministry would be the "development of geospatial data, processing, storage and dissemination of data on land. " "As of 2013 we had initiated the construction of a geo-spatial data centre. Kenya looks to create 'army of digital workers' Published on 05 September 2016 By Matshelane Mamabolo Kenya's government is stepping up support for the country's ICT industry with the launch of the Ministry of ICT's 2016 Presidential Digital Talent Programme (PDTP) in partnership with private sector companies including SAP, Google Africa, IBM, SevenSeas Technologies and Liquid Telecom. 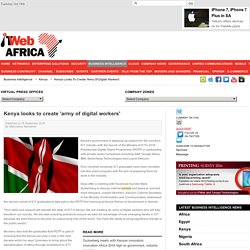 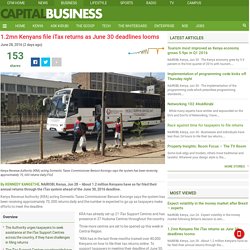 Kenya Revenue Authority (KRA) acting Domestic Taxes Commissioner Benson Korongo says the system has been receiving approximately 70, 000 returns daily and the number is expected to go up as taxpayers make efforts to meet the deadline. Overview The Authority urges taxpayers to seek assistance at the iTax Support Centres across the country, if they have challenges in filing returnsThe iTax Support Centres countrywide have also been opened for extended hours to the public ahead of the deadline for filing the returnsKRA continues to hold sensitizations to educate taxpayers on how to file their returns, the benefits of filing the returns and the need to file the returns early enough to avoid last minute rushes. Infographic: The Future of Mobile Banking - Capital Business. East Africa: Insurance Comparison Portal Launched. Insurance consumers will now be able to compare and also buy insurance products and services from various companies across the region. 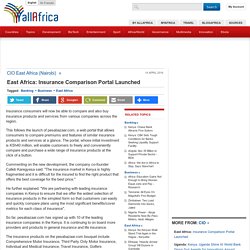 This follows the launch of pesabazaar.com, a web portal that allows consumers to compare premiums and features of similar insurance products and services at a glance. The portal, whose initial investment is KSh40 million, will enable customers to freely and conveniently compare and purchase a wide range of insurance products at the click of a button.

Commenting on the new development, the company co-founder Calleb Karegyesa said: "The insurance market in Kenya is highly fragmented and it is difficult for the insured to find the right product that offers the best coverage for the best price. " So far, pesabazaar.com has signed up with 10 of the leading insurance companies in the Kenya. It is continuing to on board more providers and products in general insurance and life insurance. How ‘Uber Syndrome’ has overturned business plans. Many Kenyan business executives are having sleepless nights due to a growing fear of getting disrupted by a digital start-up operating in their industry. 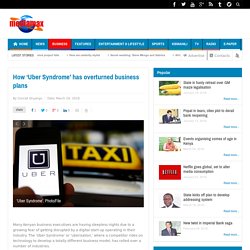 The ‘Uber Syndrome’ or ‘uberisation,’ where a competitor rides on technology to develop a totally different business model, has rolled over a number of industries. In a shifting competition arena, chief executives, finance officers and junior managers of incumbent brands are going back to the drawing board to craft new ways to save their ‘sustainable business plans’. Firm launches app mapping free Wi-Fi hotspots. Liquid Telecom Kenya has launched an app mapping more than 350 free Wi-Fi hotspots in Nairobi, Nakuru, Mombasa, Kisumu, Eldoret, Kajiado, and Nyeri. The Liquid Telecom Wi-Fi Finder app helps people find the free Wi-Fi zones, which are helping to open affordable access to the Internet. “We have so far installed over 350 hotspots in Kenya, many of them in partnership with leading retailers, cafes, restaurants, bars, banks and shopping malls,” said Ben Roberts, Liquid Telecom Kenya CEO and Liquid Telecom Group Chief Technical Officer.

The sites in the Wi-Fi Finder all have some form of free, public access, running from a minimum of 15 minutes of free use to unlimited free use, such as the BilaWaya street Wi-Fi service in Nakuru. The app shows the location of the free Wi-Fi as well as the address and contact details for each hotspot. “For venues such as restaurants and hotels, free Wi-Fi will eventually become as expected as any other amenity. Government to rollout pilot laptops project. Kenya: Govt to Spend Sh13 Billion in War Against Hackers.

File photo. By Lilian Ochieng' Technology firms and insurers are among those set to benefit as government bolsters its 2016 cyber defence budget by 15 per cent to Sh13 billion underlining the rising threat posed by hackers, a new report shows. A report from the International Data Corporation states that government will spend Sh13 billion in its ICT systems, especially trying to fight the rising cases of cybercrime. Kenya: E-Commerce Gaining Popularity in Kenya as Mobile Phone Technology Grows. By James Kariuki E-commerce prospects in Kenya have gone a notch higher following the active involvement of delivery companies in the transactions mix. Global logistics companies DHL and G4S which have strong local presence now provide their customers with an inspection service for all online goods before payments is effected and real-time tracking ability to monitor movement of parcels from dispatch point to the delivery office.

Kenya's mobile penetration hits 88 percent. According to the quarterly sector statistics report by the Communications Authority of Kenya (CA), the uptake of mobile services by Kenyans continued to grow leading to mobile penetration growing to 88.1per cent with 37.8million subscribers up from 36.1 million in the previous quarter.

This was announced through an article, which was accompanied by the report, published on the CA's official website informing readers of when the growth occurred. "The uptake of mobile services by Kenyans continued to grow during the first quarter of the 2015/16 Financial year spanning July to September 2015. " The article read. The report shows that pre-paid subscriptions continue to dominate the mobile telephony sector, registering 36.8 million subscribers, accounting for 97.3 per cent of the total subscriptions. Post-paid subscriptions saw a marginal increase to 989,889 up from 963,684 in the previous quarter.

Mkopo Rahisi: The mobile app using social media data to give micro-loans. To get a quick loan from a commercial bank to deal with an emergency is not easy. You will need collateral or a salary slip, and the verification procedures do not exactly lend themselves to emergency situations. Mobile-based apps are now addressing this gap, and disrupting financial services in the process. There are more than 36 million mobile phone users in Kenya, presenting a large market for financial solutions. One application looking to take advantage of these numbers is Mkopo Rahisi, a mobile-based credit lending service owned by InVenture. Kenya: EAX Opens in Kenya's Rift Valley. Kenya: Security Response Expected to Improve As County Launches SMS Reporting System. Nakuru County's security committee has launched a community based crime monitoring and reporting system expected to improve security responses.

Coastweek - The most from the coast. Africa in Transition » Kenya’s Silicon Savannah Spurs Tech in Sub-Saharan Africa. A Somali man browses the internet on his mobile phone at a beach along the Indian Ocean coastline in Somalia's capital Mogadishu, January 10, 2014. Cyber crime costing Kenya Kshs15b annually.

By Melline Myendo Poor information, security training and low awareness levels on cyber security have been identified as the key factors fueling the rising cases of cyber attacks in the country. Cyber Security Consulting Firm, Serianu, Managing Director William Makatiani warns that overlooking simple security systems such as using factory settings and administrator passwords eases their access to hackers. The fast adoption of technology has seen cyber threats also increasing with 80 percent of Kenyans who use the internet exposed to cyber attacks.