Can Technology Solve the Fit Problem in Fashion E-Commerce? LONDON, United Kingdom — Having to return ill-fitting clothing purchased on a website can be a uniquely disappointing experience. 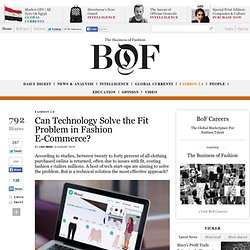 After shopping for a garment you want, you wait — a day, a week, sometimes more — and finally receive your order, carefully wrapped in tissue paper or plastic. Excited and optimistic, you slip it on… only to find that it doesn’t fit. It’s too loose or too tight, or perhaps doesn’t fall the way you had imagined. You put it back in its box with a dispirited sigh and request a pick up — or worse, plan a trip to the post office. Returns stemming from poor fit are also a major pain point for online retailers. U.S. Retailers Suffer as Shoppers Go Online - BoF - The Business of Fashion. NEW YORK, United States — U.S. retailers are suffering through the slowest back-to-school shopping season since the recession ended in 2009, raising concern that the year-end holidays will bring more of the same. 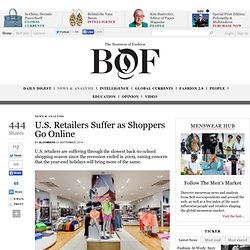 Spending in the period, which continues through the end of September, has risen 3.1 percent, missing a forecast for a 3.2 percent gain, according to research firm Customer Growth Partners LLC. That’s the smallest increase in more than five years. Fast Retailing Forecasts Profit to Rise 34% - BoF - The Business of Fashion. TOKYO, Japan — Fast Retailing Co., Asia’s largest clothing retailer, forecast a 34 percent rise in net income after Uniqlo sales in Japan grew 14 percent and revenue came in higher than expected in the last fiscal year. 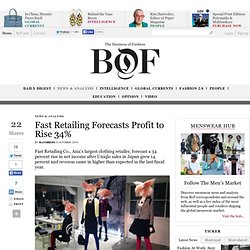 Net income will probably be 100 billion yen ($927 million) for the year ending August 2015, the Yamaguchi, Japan-based company said today in a statement. Sales may rise 16 percent to 1.6 trillion yen in the year, it said. Fast Retailing, led by billionaire Tadashi Yanai, opened stores including in China, the U.S., and Europe, and bought foreign brands as it sought growth overseas. The clothing chain has run into obstacles, as higher costs and weak demand forced it to cut its forecast last April, and losses at its J Brand unit in the U.S. led it to do so again in July. The company said net income dropped 29 percent to 74.5 billion in the year ending August 2014, while sales rose 21 percent to 1.38 trillion yen.

Online Retailer Amazon Set to Open a Physical Store - BoF - The Business of Fashion. WASHINGTON, United States — Amazon.com Inc, the online juggernaut whose rapid expansion helped derail many a brick-and-mortar retail chain, may soon open its first physical store, at a prime site in Midtown Manhattan, according to The Wall Street Journal. 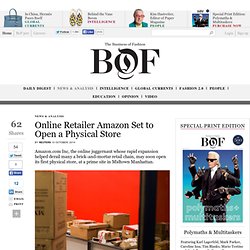 Amazon plans to open its first full-fledged store across from the Empire State Building, at 7 West 34th Street, the Journal reported. The area, which is also near Macy’s flagship store, is one of the city’s most heavily trafficked zones. The Booming Market for Your Hermès Hand-Me-Downs - BoF - The Business of Fashion. Interest Rate Rises: Why they matter.

Interest is a charge on borrowing money and the interest rate is the size of this charge. 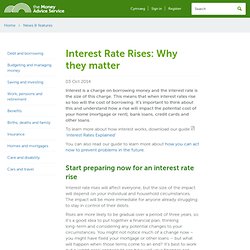 This means that when interest rates rise so too will the cost of borrowing. It’s important to think about this and understand how a rise will impact the potential cost of your home (mortgage or rent), bank loans, credit cards and other loans. To learn more about how interest works, download our guide ‘Interest Rates Explained’ You can also read our guide to learn more about how you can act now to prevent problems in the future. Start preparing now for an interest rate rise Interest rate rises will affect everyone, but the size of the impact will depend on your individual and household circumstances. Rises are more likely to be gradual over a period of three years, so it’s a good idea to put together a financial plan, thinking long-term and considering any potential changes to your circumstances. . • Money health check – are your finances in good enough condition to take on an interest rate rise? Homes. Interest rates: What homeowners can do NOW to beat the rise. Interest rates are likely to rise either later this year or early in 2015. 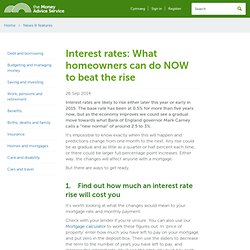 Student campaign urging people to urinate in the shower would save Brits £430million a year. Debs Torr and Chris Dobson say that not using the toilet would save 12 litres of water with every non-flush Some people recycle, others walk and some make sure they always turn the lights off - but two students have come come up with a novel campaign to save the environment. 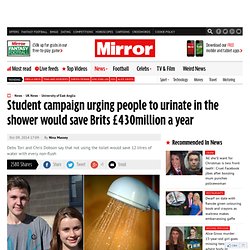 Green-minded Debs Torr and Chris Dobson are encouraging people to urinate in the shower. eBay PayPal split: How will it affect you? eBay Inc. has announced that it will be spinning off its PayPal division next year as a separate company. 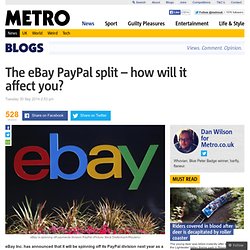 That means that there will be two independent companies: one called eBay that will be all the global eBay marketplaces and other companies they own for trading on such as Gumtree.