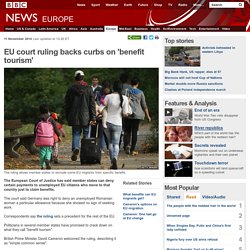 The court said Germany was right to deny an unemployed Romanian woman a particular allowance because she showed no sign of seeking work. Correspondents say the ruling sets a precedent for the rest of the EU. Politicians in several member states have promised to crack down on what they call "benefit tourism". British Prime Minister David Cameron welcomed the ruling, describing it as "simple common sense". Russia opens oil price-fixing probe against top firms. 6 November 2014Last updated at 06:11 ET State-owned Rosneft has huge exploration projects in Siberia Russian state inspectors have opened an inquiry into major Russian oil firms suspected of market rigging to push up petrol prices nationally. 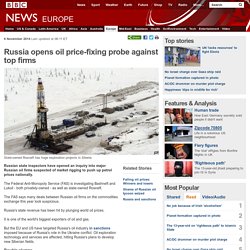 The Federal Anti-Monopoly Service (FAS) is investigating Bashneft and Lukoil - both privately-owned - as well as state-owned Rosneft. The FAS says many deals between Russian oil firms on the commodities exchange this year look suspicious. Russia's state revenue has been hit by plunging world oil prices. It is one of the world's biggest exporters of oil and gas. China manufacturing growth slows, PMI survey suggests. 2 November 2014Last updated at 08:30 ET Growth in China's manufacturing sector slowed in October, an official survey suggests, reinforcing concerns about a slowdown in the wider economy. 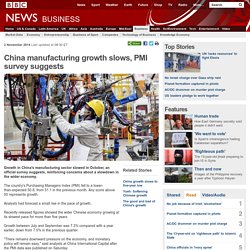 The country's Purchasing Managers Index (PMI) fell to a lower-than-expected 50.8, from 51.1 in the previous month. Any score above 50 represents growth. Analysts had forecast a small rise in the pace of growth. Recently released figures showed the wider Chinese economy growing at its slowest pace for more than five years.

Growth between July and September was 7.3% compared with a year earlier, down from 7.5% in the previous quarter. "There remains downward pressure on the economy, and monetary policy will remain easy," said analysts at China International Capital after the PMI data was published on Saturday. Growth target Beijing recently unveiled measures designed to stimulate consumer spending, including relaxing limits on home purchases and injecting billions of dollars into the country's biggest banks. Eurozone economic forecast cut by European Commission. 4 November 2014Last updated at 09:57 ET The economy of the 18-country strong eurozone will grow by just 0.8% this year, the European Commission has said. 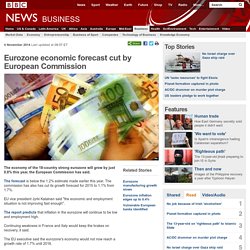 The forecast is below the 1.2% estimate made earlier this year. The commission has also has cut its growth forecast for 2015 to 1.1% from 1.7%. EU vice president Jyrki Katainen said "the economic and employment situation is not improving fast enough". The report predicts that inflation in the eurozone will continue to be low and employment high.

Continuing weakness in France and Italy would keep the brakes on recovery, it said. The EU executive said the eurozone's economy would not now reach a growth rate of 1.7% until 2016. Andrew Walker, BBC economics correspondent, writes: The Commission's new forecasts are gloomy for sure, but they do represent an improvement on where the eurozone is now. Ebola crisis: The economic impact. 20 August 2014Last updated at 19:03 ET By Richard Hamilton BBC News Military road blocks are preventing the movement of goods and workers With more than 1,300 reported deaths from Ebola in West Africa, the virus continues to be an urgent health crisis, but it is also having a devastating impact on the economies of Guinea, Liberia and Sierra Leone. 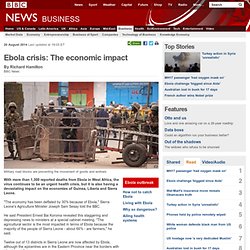 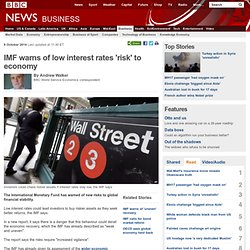 Low interest rates could lead investors to buy riskier assets as they seek better returns, the IMF says. Ebola challenge 'biggest since Aids' 9 October 2014Last updated at 09:24 ET Scientists are racing to understand - and combat - the Ebola virus The Ebola outbreak in West Africa is unlike anything since the emergence of HIV/Aids, top US medical official Thomas Frieden has said. 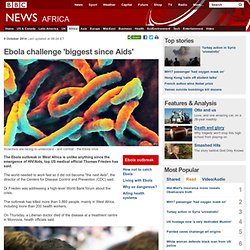 The world needed to work fast so it did not become "the next Aids", the director of the Centers for Disease Control and Prevention (CDC) said. Dr Frieden was addressing a high-level World Bank forum about the crisis. The outbreak has killed more than 3,860 people, mainly in West Africa, including more than 200 health workers. On Thursday, a Liberian doctor died of the disease at a treatment centre in Monrovia, health officials said. China's oil demand meets North Sea supply.