Asian Development Bank and Cambodia: Fact Sheet. Ministry of Economy and Finance of Cambodia. 300.000 INDICATORS FROM 196 COUNTRIES. Economic Land Concessions (ELCs) Land concessions have been granted in Cambodia since the 1990s. 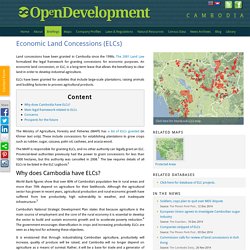 The 2001 Land Law formalized the legal framework for granting concessions for economic purposes. An economic land concession, or ELC, is a long-term lease that allows the beneficiary to clear land in order to develop industrial agriculture. ELCs have been granted for activities that include large-scale plantations, raising animals and building factories to process agricultural products. The Ministry of Agriculture, Forestry and Fisheries (MAFF) has a list of ELCs granted (in Khmer text only). Economic Land Concession - Home. Cdri.org.kh/images/filedownload/Cambodia_Outlook_Brief_No1_EN.pdf. 2014 Corruption Perceptions Index. Poorly equipped schools, counterfeit medicine and elections decided by money are just some of the consequences of public sector corruption. 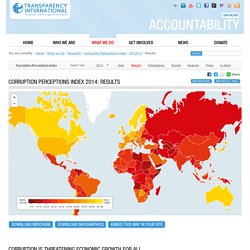 Bribes and backroom deals don’t just steal resources from the most vulnerable – they undermine justice and economic development, and destroy public trust in government and leaders. Based on expert opinion from around the world, the Corruption Perceptions Index measures the perceived levels of public sector corruption worldwide, and it paints an alarming picture. Not one single country gets a perfect score and more than two-thirds score below 50, on a scale from 0 (highly corrupt) to 100 (very clean). Corruption is a problem for all countries. Economic Trend « The Council for the Development of Cambodia (CDC) 1. 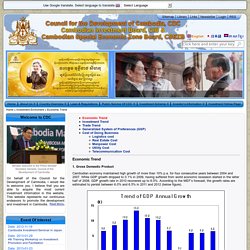 Gross Domestic Product Cambodian economy maintained high growth of more than 10% p.a. for four consecutive years between 2004 and 2007. While GDP growth dropped to 0.1% in 2009, having suffered from world economic recession started in the latter half of 2008, GDP growth rate in 2010 recovered up to 6.0%. Managing Cambodia’ s Economic Fragility. By Heng Dyna Cambodia enjoyed the rapid growth between 2000-2007 with an average annual rate of around 9%. 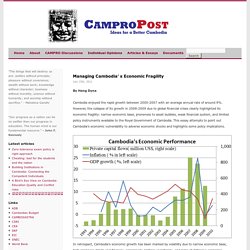 However, the collapse of its growth in 2008-2009 due to global financial crises clearly highlighted its economic fragility: narrow economic base, proneness to asset bubbles, weak financial system, and limited policy instruments available to the Royal Government of Cambodia. This essay attempts to point out Cambodia’s economic vulnerability to adverse economic shocks and highlights some policy implications. Www.cdri.org.kh/webdata/download/sr/agriStrategy9e.pdf. All ministries in Cambodia. 2009-Overview-on-Transport-Infrastructure-Sectors-in-Kingdom-of-Cambodia.pdf. Open Development Cambodia. Following global supply growth and falling prices, Cambodian rubber has decreased in value over the past three months, according to industry experts. 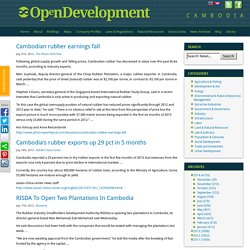 Men Sopheak, deputy director-general of the Chop Rubber Plantation, a major rubber exporter in Cambodia, said yesterday that the price of dried [natural] rubber was at $2,100 per tonne, in contrast to $3,100 per tonne in March. … Stephen V Evans, secretary-general of the Singapore-based International Rubber Study Group, said in a recent interview that Cambodia is only active in producing and exporting natural rubber. All ministry - address. Cambodia export and import. X Image InputX Upload an image from your computer: Enter a URL for an image: 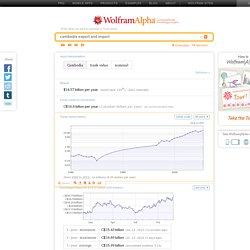 Embassy of the United States Phnom Penh, Cambodia. Cambodia is a developing market economy that grew at an average rate of over 10 percent from 2004 to 2007, driven largely by an expansion in the garment sector, construction, agriculture, and tourism. 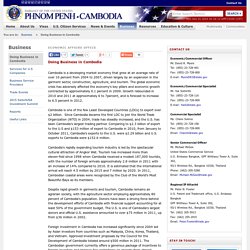 The global economic crisis has adversely affected the economy’s key pillars and economic growth contracted by approximately 0.1 percent in 2009. Growth rebounded in 2010 and 2011 at approximately 6 to 7percent, and is forecast to increase to 6.5 percent in 2012. 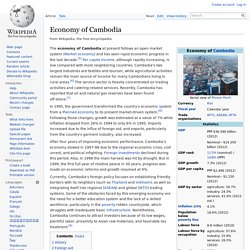 Cambodia's two largest industries are textiles and tourism, while agricultural activities remain the main source of income for many Cambodians living in rural areas.[6] The service sector is heavily concentrated on trading activities and catering-related services. Recently, Cambodia has reported that oil and natural gas reserves have been found off-shore.[7] In 1995, the government transformed the country's economic system from a Planned economy to its present market-driven system.[8] Following those changes, growth was estimated at a value of 7% while inflation dropped from 26% in 1994 to only 6% in 1995.

Imports increased due to the influx of foreign aid, and exports, particularly from the country's garment industry, also increased. History[edit]