Uganda Sets Up Online Visa Application Portal. According to statistics from the directorate, over 60,000 applications for visas and permits have been completed and approved online since the software that functions through computers connected to internet was installed. 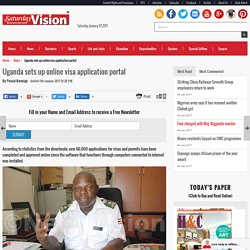 Directorate of Citizenship and Immigration Control spokesperson Jacob Siminyu addressing the media. PHOTO/Ramadhan Abbey Uganda has declared its new online visa application and approval system an efficient digital (visa) and permits management infrastructure following the end of a six-month period allowed by the service provider to determine its efficacy. The online visa portal was set up by Gamalto, a Netherlands’ technology firm, on July 1 last year at the Directorate of Citizenship and Immigration Control in the internal affairs ministry in Kampala.

The first phase of the setting up the portal which is linked to immigration facilities at border crossings cost $1,915,238 (about sh7b). Immigration officers in the processing room. Enhances security Reduced time. Uganda speeds visa issuance and. Uganda speeds visa issuance and strengthens border security with Gemalto Visa Management System Gemalto (Euronext NL0000400653 GTO), the world leader in digital security, is supplying Uganda’s Directorate of Citizenship and Immigration Control (DCIC) with its Coesys Visa Management that combines swift issuance of all visas and permits with biometric enrollment upon arrival. 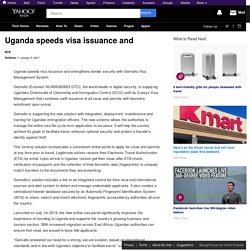 Gemalto is supporting the new solution with integration, deployment, maintenance and training for Ugandan immigration officers. Mobile loans in Uganda hit over 1 billion in just 2 months since introduction – The Exchange. The Kenya Revenue Authority (KRA) is set to partner with County governments to strengthen compliance in the remission of property rates. 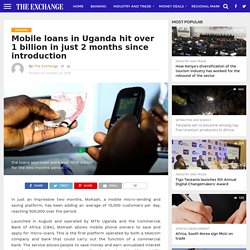 According to the Commission on Revenue Allocation (CRA), property rates remain the greatest challenge in county revenue collection with most county governments issuing biannual amnesties to property owners to encourage them to comply with the law. Speaking during the 2nd Annual Tax Summit CRA Chairman Micah Cheserem says county revenues have grown to over Ksh. 35 billion shillings annually but counties are still highly dependent on the revenue share from the national government. ‘KRA has been talking about transforming into the Kenya revenue Service, part of this transformation should be collaboration with county governments. KRA’s mandate is not only to serve the national government by to also enable counties meet their own revenue targets’ Mr. Cheserem said. KRA Commissioner for Domestic Taxes Mr. Ugandan creates 'digital mall' for on-demand services. Parent Category: Mobile Published on 02 June 2016 By Tom Jackson US-based company Kwiksy has launched its peer-to-peer payments app in Kenya, Nigeria and Uganda, allowing users to make international payments using only their mobile number at a cheaper rate than that charged by traditional providers. 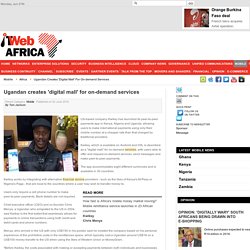 Kwiksy, which is available on Android and iOS, is described as a "digital mall" for on-demand services, with users able to offer and request on-demand services, send messages and make peer-to-peer payments. The app accommodates eight different currencies and is available in 30 countries. Uganda: Mobile Application for Livestock Diseases Rolled Out in Karamoja. By Steven Ariong Moroto — The Food and Agriculture Organization of the United Nations and the National Animal Disease Diagnostic and Epidemiology Centre (NADDEC) of the Ministry of agriculture, Animal Industry and Fisheries (MAAIF) launched an Event Mobile Application (EMA) for livestock disease surveillance in Karamoja Region. 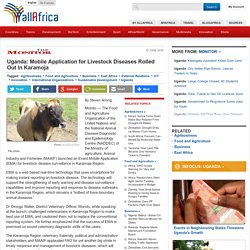 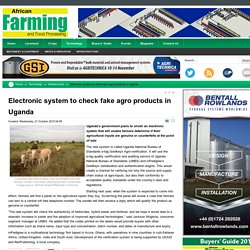 (Image source: Michael Shade/Wikimedia Commons) The new system is called Uganda National Bureau of Standards e-tag Goldkeys Agro-verification. It will use the e-tag quality certification and auditing service of Uganda National Bureau of Standards (UNBS) and mPedigree’s Goldkeys serialisation and authentication engine. This would create a channel for verifying not only the source and supply chain status of agro-inputs, but also their conformity to acceptable quality standards under the country’s laws and regulations.

Starting next year, when the system is expected to come into effect, farmers will find a panel on the agriculture inputs they buy. mPedigree is a multinational technology firm based in Accra, Ghana, with operations in nine countries in sub-Saharan Africa, United Kingdom, India and South Asia. Untitled. Ugandans Model Android App To Help Curb Crime. Askari means the police in Swahili, but often if you call in an emergency the overstretched police don’t actually come in Uganda. 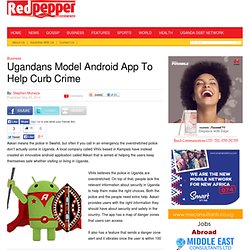 A local company called Vihlix based in Kampala have instead created an innovative android application called Askari that is aimed at helping the users keep themselves safe whether visiting or living in Uganda. Vihlix believes the police in Uganda are overstretched. On top of that, people lack the relevant information about security in Uganda to help them make the right choices. The Observer - Mobile money transactions value hit Shs 19 trillion. Business Tuesday, 10 June 2014 21:39 Written by Alon Mwesigwa At least 14 million Ugandans used the mobile money platform to trade, send and receive money last year, putting it among the most used medium of transaction, according to Bank of Uganda. 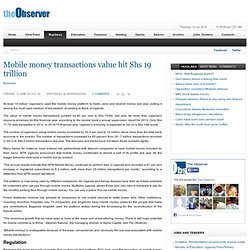 The value of mobile money transactions jumped by 40 per cent to Shs 18.6tn last year, far more than Uganda’s resource envelope for this financial year, according to the central bank’s annual supervision report for 2013. Only Shs 11.7tn was transacted in 2012. The number of Ugandans using mobile money increased by 52.4 per cent to 14 million, twice more than the total bank accounts in the country. Many banks, for instance, have entered into partnerships with telecom companies to have mobile money included on their menu. The platform is now being used by different companies. Uganda: Google to Offer Localised Data. Google is set to localise its content to fit the desires and needs of the Ugandan public. 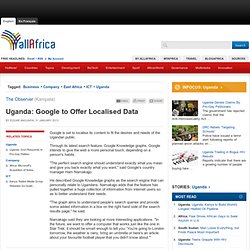 Through its latest search feature, Google Knowledge graphs, Google intends to give the web a more personal touch, depending on a person's habits. "The perfect search engine should understand exactly what you mean and give you back exactly what you want," said Google's country manager Ham Namakajjo. He described Google Knowledge graphs as the search engine that can personally relate to Ugandans. Namakajjo adds that the feature has pulled together a huge collection of information from internet users so as to better understand their needs. Uganda: Tablets to detect fake permits. Face Technologies, the company contracted to print and issue computerised driving permits, has provided a new solution to eliminate forged driving permits. 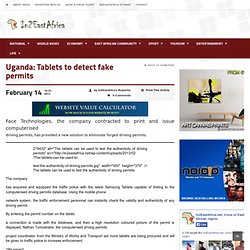