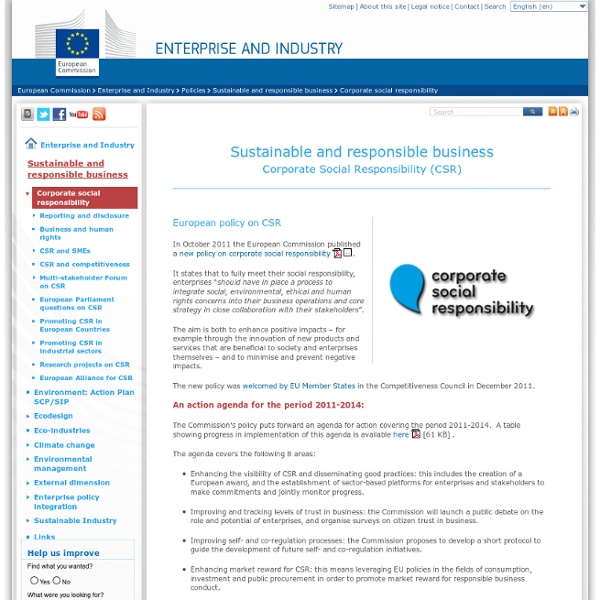 Corporate social responsibility (CSR) refers to companies taking responsibility for their impact on society. As evidence suggests, CSR is increasingly important to the competitiveness of enterprises. It can bring benefits in terms of risk management, cost savings, access to capital, customer relationships, human resource management, and innovation capacity. European Commission Strategy CSR is defined by the European Commission as "the responsibility of enterprises for their impacts on society" (COM (2011) 681 ). The Commission’s CSR agenda for action is: A detailed table showing progress in implementation of this agenda is available here

The future of sustainability reporting will be plural, bespoke and continuous It is universally agreed that large companies should somehow report on non-financial matters: last year more than 3,000 did so by means of a corporate responsibility (CR) or sustainable development (SD) report. But ask the questions "why?" and "how?"

Can the Global Reporting Initiative help restore faith in the media As if the advent of 'Generation We-Want-It-All-For-Free' and the rise of social media were not challenging enough, recent events mean that media organisations undoubtedly face an uphill struggle in the years to come. Business models under pressure and public distrust towards mediacontent are coming soon to a boardroom near you. The Global Reporting Initiative (GRI) recently launched its final draft of the Media Sector Supplement, a set of indicators and questions aimed at measuring, in as much detail as possible, the social, environmental and financial impacts of media companies on society. The idea is that mediacompanies will become better 'corporate citizens' as the tools for holding them accountable become more refined and allow for comparisons across borders. As a mechanism for promoting integrity and accountability, GRI's project is both worthwhile and timely. Total volume and number of significant spills;Location and size of land owned in [...] areas of high biodiversity

The Future of Sharing on Facebook, Twitter and Google+ Users of social networks are getting tired of sharing — but that doesn't mean sharing is on the decline. A new study analyzes sharing behaviors on Facebook, Twitter and Google+ and makes predictions for the future of sharing. Digital agency Beyond released the study for Social Media Week, along with the below infographic. Beyond makes six predictions about where sharing is headed based on the responses of 2,000 social media users in the U.S. and UK, between ages 16 and 40, who are active on either Twitter, Facebook or Google+. Setting the Standard for Corporate Responsibility and Sustainable Development - Top Five Misconceptions About GRI Reporting 2012-02-16By Anna Ashbaugh, Associate, Advisory Services The Global Reporting Initiative’s sustainability reporting Guidelines (G3.1), while widely applied, are often misunderstood. With nearly 200 pages of guidance and detailed technical protocols, it is easy to lose sight of the purpose of reporting, which is to be accountable to stakeholders and drive performance.

Remarks to "KPMG Summit: Business Perspective For Sustainable Growth" Mr. Michael Andrew, [Chairman of KPMG International,] Mr. John Veihmeyer, [Chairman and Chief Executive Officer of KPMG in the United States,] Mr. e-Learning : Think like an Editor Today’s communications professionals have the ability to reach a global audience with a single Tweet. But so too to do your biggest rivals and critics. It very much is a published or be damned world we live in. In the always-on world of social media communication core editorial skills help brands build successful engagement with their target audiences and community giving them information that is useful, informative and entertaining. This introductory editorial training workshop - split into four online modules - will teach communicators the basics of thinking like a social media editor including: Structure of the eLearning

What BP could teach you about social media smarts Home » Editor's Comment, Training An interesting new ranking arrived in my in-box Thursday morning grading the most social-savvy FTSE 100 companies. In the top 10 were plenty of brands you’d expect – Marks and Spencer, Burberry, Unilever and Intercontinental Hotels. Also making the cut was Big Oil. Improbably, both BP and Royal Dutch Shell had cracked the top 6 of the FTSE 100 Social Media Index. If you had told me a year ago that BP had cracked anybody’s list of socially committed brands, I’d have asked you how much petrol you’d been sniffing.

Are companies on the button with their online sustainability programmes? In 2010, Pepsi created a lot of fizz in the advertising world by choosing to bypass the Super Bowl — the biggest event in the brand-marketing calendar. Instead it created an ongoing corporate social responsibility (CSR) programme, The Pepsi Refresh Project. This gained huge traction through social media and set a benchmark for how companies would communicate CSR and sustainability online. Two years later, arch-rival Coca-Cola also has set down a marker for CSR and sustainability communications through its Arctic Home collaboration with WWF.