The Analysis of mind, by Bertrand Russell. - StumbleUpon 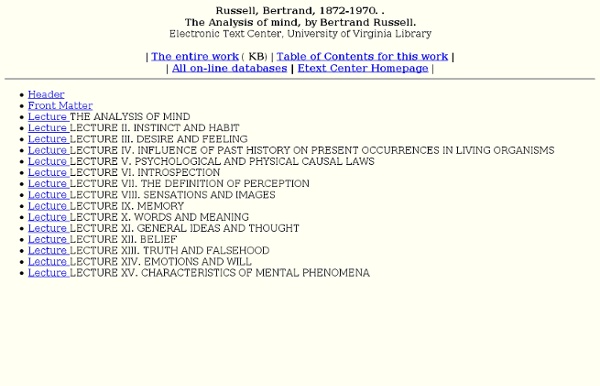 Six tips for using backstory to create compelling characters One of my followers on Twitter, @kateblogs asked me for some tips on backstory. I’m not surprised. At writers’ conferences and anywhere published authors and book agents take questions from the audience, there are always questions about backstory: how much to create and how much of it to include in the book. Unfortunately, those are the wrong questions. Effective use of backstory isn’t a matter of finding the ideal amount. The right question about backstory, is “How do I use backstory to create compelling characters?” The Story of Mankind Van Loon, Hendrik . The Story of Mankind Electronic Text Center, University of Virginia Library | Table of Contents for this work | | All on-line databases | Etext Center Homepage |

Stanley Moss Stanley Moss was educated at Trinity College (Connecticut) and Yale University and makes his living as a private art dealer, specializing in Spanish and Italian Old Masters. As a child he visited Europe with his family, and after serving in World War II he taught English in Barcelona and Rome, where he became familiar with the religious and mythical figures that appear in his work. He is the critically acclaimed author of The Skull of Adam (1979), The Intelligence of Clouds (1989), Asleep in the Garden (1997), A History of Color (2003), New and Selected Poems (2006), Rejoicing (2009), and God Breaketh Not All Men's Hearts Alike (2011). Poet and critic Hayden Carruth has been quoted as saying, “The poetry of the ages is an argument with God, but few poets have picked up that argument in recent years.

Discounting Discounting is an internal process during which we, out of conscious awareness, ignore information relevant to the solution of a problem. A discount always entails some distortion of reality, which confirms our script beliefs . Discounting is a form of putting oneself, another person, or the world in general down. Put another way, discounts help us to maintain the status quo rather than change. It's generally a rather unhelpful thing to do, but sticking to what we know and what we normally do helps us to feel safe. Intellectual disability There are a variety of medical conditions affecting cognitive ability. This is a broad concept encompassing various intellectual or cognitive deficits, including intellectual disability (formerly called mental retardation), deficits too mild to properly qualify as intellectual disability, various specific conditions (such as specific learning disability), and problems acquired later in life through acquired brain injuries or neurodegenerative diseases like dementia. These disabilities may appear at any age. Intellectual disability[edit]

The Outsider by H. P. Lovecraft Unhappy is he to whom the memories of childhood bring only fear and sadness. Wretched is he who looks back upon lone hours in vast and dismal chambers with brown hangings and maddening rows of antique books, or upon awed watches in twilight groves of grotesque, gigantic, and vine-encumbered trees that silently wave twisted branches far aloft. Such a lot the gods gave to me - to me, the dazed, the disappointed; the barren, the broken. And yet I am strangely content and cling desperately to those sere memories, when my mind momentarily threatens to reach beyond to the other. I know not where I was born, save that the castle was infinitely old and infinitely horrible, full of dark passages and having high ceilings where the eye could find only cobwebs and shadows. The stones in the crumbling corridors seemed always hideously damp, and there was an accursed smell everywhere, as of the piled-up corpses of dead generations.

36 Writing Essays by Chuck Palahniuk 1: Establishing Your Authority Chuck teaches two principal methods for building a narrative voice your readers will believe in. Discover the Heart Method and the Head Method and how to employ each to greatest effect. 2: Developing a Theme At the core of Minimalism is focusing any piece of writing to support one or two major themes. Learn harvesting, listing, and other methods, after a fun excursion into the spooky side of Chuck's childhood.

Applying the concept of games Games seem to creep into people's relationships quite easily. Once you have read the chapter on games , think about your own relationship: do you recognize a pattern between the two of you that is happening again and again? Do you both end up feeling bad in some way at the end of it? Does it feel like it simply stays the same and you aren't learning anything from an argument? The Lesser Key of Solomon The Lesser Key of Solomon, also known as Clavicula Salomonis Regis[note 1] or Lemegeton, is an anonymous grimoire (or spell book) on demonology. It was compiled in the mid-17th century, mostly from materials a couple of centuries older.[1][2] It is divided into five books—the Ars Goetia, Ars Theurgia-Goetia, Ars Paulina, Ars Almadel, and Ars Notoria.[1][3] Ars Goetia[edit] The most obvious source for the Ars Goetia is Johann Weyer's Pseudomonarchia Daemonum in his De praestigiis daemonum. Weyer does not cite, and is unaware of, any other books in the Lemegeton, indicating that the Lemegeton was derived from his work, not the other way around.[1][4] The order of the spirits was changed between the two, four additional spirits were added to the later work, and one spirit (Pruflas) was omitted.

Writers, Quotes, Biography, Poetry, Fiction, Artists - Paris Review Purchase this Issue $15.00 Michael Holroyd on the art of biography: “I believe in private life for the living, and I think that when one is dead one should be a little bit bolder, so that the rest of us may have some record of how things actually were.” And Hermione Lee: “Some cynical biographer said to me, Make sure it’s a good death.

5 Ways You're Accidentally Making Everyone Hate You #2. You Wasted Their Time Getty All you did was email your boss with a simple question or idle thought, and she jumped down your throat! The Egyptian Book of the Dead Index Sacred Texts Egypt The Papyrus of Ani by Introduction Translation