We need to talk about TED 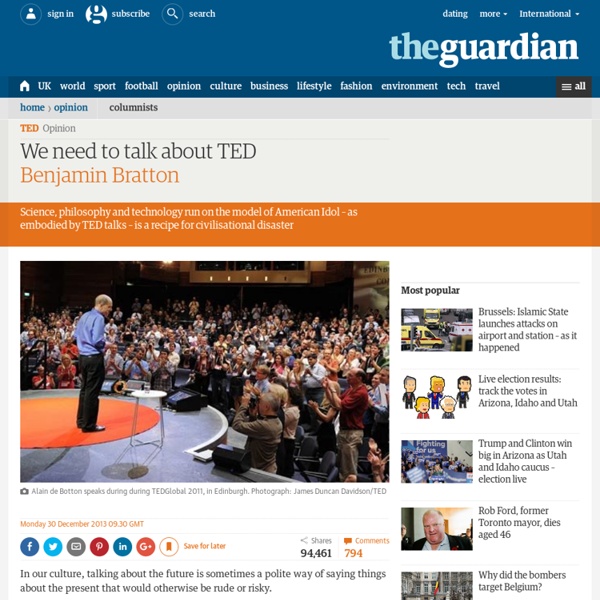 In our culture, talking about the future is sometimes a polite way of saying things about the present that would otherwise be rude or risky. But have you ever wondered why so little of the future promised in TED talks actually happens? So much potential and enthusiasm, and so little actual change. Are the ideas wrong? Or is the idea about what ideas can do all by themselves wrong? I write about entanglements of technology and culture, how technologies enable the making of certain worlds, and at the same time how culture structures how those technologies will evolve, this way or that. So my TED talk is not about my work or my new book – the usual spiel – but about TED itself, what it is and why it doesn't work. The first reason is over-simplification. At this point I kind of lost it. What is TED? So what is TED exactly? What is it that the TED audience hopes to get from this? I'm sorry but this fails to meet the challenges that we are supposedly here to confront. T and Technology T – E – D.

In Praise of Failure The Stone is a forum for contemporary philosophers and other thinkers on issues both timely and timeless. Janus FilmsWinning isn’t everything. Antonius Block, right, played by Max von Sydow, challenges Death to a game of chess in the 1957 film “The Seventh Seal,” directed by Ingmar Bergman. If there was ever a time to think seriously about failure, it is now. We are firmly in an era of accelerated progress. Certainly the promise of continual human progress and improvement is alluring. Why should we care? So, allow me to make a case for the importance of failure. Failure is significant for several reasons. Failure allows us to see our existence in its naked condition. Whenever it occurs, failure reveals just how close our existence is to its opposite. Failure is the sudden irruption of nothingness into the midst of existence. In this role, failure also possesses a distinct therapeutic function. Our capacity to fail is essential to what we are. We are designed to fail.

The Return of Wood: New Designs for An Age-Old Material Photo courtesy Orée It feels a little ridiculous calling something as classic as wood a trend. But recently it’s become impossible not to notice that wood has had a design resurgence. Dwell is “loving” what it calls this fall’s “warm wood tones” trend. The Wall Street Journal reports on the trend in minimalist wood kitchens, including newfangled wood-effect laminates that lend the authenticity of wood at a lower price point. And earlier this year, Herman Miller launched the Eames Molded Wood Side Chair, a reinterpretation of the classic molded plastic 1950 chair designed by Charles and Ray Eames that uses cutting edge 3-D veneer technology to mold santos palisander, white ash or walnut into the complex curves of a single shell. Photo courtesy Herman Miller. The molded wood version of the chair is new, but it somehow feels even more authentic than the original. In addition to these new interpretations of wooden chairs and cabinetry, wood is also showing up in more surprising ways.

A.I. Has Grown Up and Left Home - Issue 8: Home The history of Artificial Intelligence,” said my computer science professor on the first day of class, “is a history of failure.” This harsh judgment summed up 50 years of trying to get computers to think. Sure, they could crunch numbers a billion times faster in 2000 than they could in 1950, but computer science pioneer and genius Alan Turing had predicted in 1950 that machines would be thinking by 2000: Capable of human levels of creativity, problem solving, personality, and adaptive behavior. Maybe they wouldn’t be conscious (that question is for the philosophers), but they would have personalities and motivations, like Robbie the Robot or HAL 9000. Our approach to thinking, from the early days of the computer era, focused on the question of how to represent the knowledge about which thoughts are thought, and the rules that operate on that knowledge. This lack of context was also the Achilles heel of the final attempted moonshot of symbolic artificial intelligence. (implies (equals ?

Grand Budapest Hotel poster and typeface: Futura is out, and Wes Anderson’s new font is Archer. The new poster for Wes Anderson’s much-anticipated follow-up to Moonrise Kingdom hit the Web today, and it’s predictably dollhouse-y and gorgeous, resembling the old-fashioned one-sheet for Moonrise Kingdom. But one thing above all will stand out to longtime Wes fans: the typeface. Anderson has used Futura for most of his features since 1996’s Bottle Rocket, with the typeface even earning a coveted spot on the Wes Anderson bingo board. But recently he has mixed up his font game a bit, opting instead for a custom typeface, designed by Jessica Hische, for Moonrise Kingdom. What did he go with for his next picture, The Grand Budapest Hotel? Archer. Designer Jesse Ragan, who worked on the typeface for Hoefler & Frere-Jones, told me that there seem to be “no modifications.”

ALCOHOL, WITHNAIL AND GARY KING BUT BEFORE WE GO ANY FURTHER LET HULK FIRST MAKE AN ACKNOWLEDGEMENT: IT'S REALLY HARD TO SIT HERE AND SPOUT OFF SOME BANAL PLATITUDES LIKE ABOVE. IT MAKES IT SEEM LIKE HULK IS JUST PICKING THEM OFF FROM SLOGAN-IZED SELF-HELP SECTIONS OR SOMETHING. SO PLEASE UNDERSTAND THAT THESE PLATITUDES COME MORE FROM A PLACE OF... WELL... PAIN. COMING OUT OF THE INITIAL SCREENING HULK ACTUALLY HEARD A CRITIC SAY "Ugh, why did he want to go finish the pub crawl so bad? "You know I used to be sober. Bruce Schneier Discusses the NSA Documents Bruce Schneier, a cryptographer and author on security topics, last month took on a side gig: helping the Guardian newspaper pore through documents purloined from the U.S. National Security Agency by contractor Edward Snowden, lately of Moscow. In recent months that newspaper and other media have issued a steady stream of revelations, including the vast scale at which the NSA accesses major cloud platforms, taps calls and text messages of wireless carriers, and tries to subvert encryption. This year Schneier is also a fellow at Harvard’s Berkman Center for Internet and Society. Taken together, what do all of the Snowden documents leaked thus far reveal that we didn’t know already? Those of us in the security community who watch the NSA had made assumptions along the lines of what Snowden revealed. We are seeing the NSA collecting data from all of the cloud providers we use: Google and Facebook and Apple and Yahoo, etc. The only analogy I can give is that it’s like death. They might.

Are We Puppets in a Wired World? by Sue Halpern To Save Everything, Click Here: The Folly of Technological Solutionism by Evgeny Morozov PublicAffairs, 413 pp., $28.99 Hacking the Future: Privacy, Identity and Anonymity on the Web by Cole Stryker Overlook, 255 pp., $25.95 From Gutenberg to Zuckerberg: What You Really Need to Know About the Internet by John Naughton Quercus, 302 pp., $24.95 Predictive Analytics: The Power to Predict Who Will Click, Buy, Lie, or Die by Eric Siegel Wiley, 302 pp., $28.00 Big Data: A Revolution That Will Transform How We Live, Work, and Think by Viktor Mayer-Schönberger and Kenneth Cukier Eamon Dolan/Houghton Mifflin Harcourt, 242 pp., $27.00 Status Update: Celebrity, Publicity, and Branding in the Social Media Age by Alice E. Yale University Press, 368 pp., $27.50 Privacy and Big Data: The Players, Regulators and Stakeholders by Terence Craig and Mary E.

Kids can't use computers... and this is why it should worry you - Coding 2 Learn TL;DR? Why not just go watch another five second video of a kitten with its head in a toilet roll, or a 140 character description of a meal your friend just stuffed in their mouth. “nom nom”. This blog post is not for you. The phone rang through to my workroom. It was one of the school receptionists explaining that there was a visitor downstairs that needed to get on the school’s WiFi network. iPad in hand I trotted on down to the reception to see a young twenty-something sitting on a chair with a MacBook on her knee. I smiled and introduced myself as I sat down beside her. ‘I’ll need to be quick. She reevaluated her categorisation of me. I looked at the MacBook. I handed back the MacBook and the woman opened up Safari. I’ve heard this sentence so many times now from students and staff, that I have a stock reaction. I decided that the young woman would probably not appreciate the sarcasm, and took the MacBook off her so I could add in the county’s proxy server settings. Parents Schools

The Marriage Paradox - The Chronicle Review By Clancy Martin Last Thanksgiving, at the turn-of-the-century house Amie and I just bought in old Kansas City: Amie, my third wife; Rebecca, my second; Alicia, my first; Amie’s mom, Pat; and my three daughters sat around the harvest table. My first wife, Alicia, who has a large, ambitious heart, had proposed this act of holiday lunacy. My second wife, Rebecca, had suggested we just have fun without her, but then came anyway. Amie had felt powerless to say no, and now it was taking place. Once the guests arrived, Amie hid in the kitchen until dinner. Coming out of the kitchen with a roasted chicken on a platter, I listened nervously to the conversation: "I know the wood needs oil," Amie said, gesturing to the mahogany paneling in the dining room. My eldest daughter was musing aloud about what she would do if she accidentally killed someone. "No," her mother, my first wife, said. "I’d call my attorney!" Dinner and dessert went well. Good luck always makes me anxious.

Glenn Greenwald’s Partner Detained By British Security; Was Transporting Top Secret Documents Early Sunday morning, Glenn Greenwald learned that his Brazilian partner, David Miranda, was detained and interrogated for nine hours by security officials at London’s Heathrow airport. The officials also seized Miranda’s electronic devices: his phone, laptop and so forth. At first glance, if he was indeed held because of his association with Greenwald, this was a horribly tone-deaf and heavy-handed move by British officials, especially knowing that Miranda was apparently detained under the U.K.’s Terrorism Act of 2000, Schedule 7. My initial reaction was the same as many: Why did the British government target Greenwald’s spouse? He might’ve been profiled, I thought, or he might’ve been flagged as Greenwald’s spouse. When I read The Guardian‘s article about the incident, however, more questions popped up — as with much of The Guardian‘s reporting on this topic, the publication’s tendency for coy, smoke-and-mirrors reporting invariably raises more questions than it answers. Mr.