Can't Stand Meditation? This Technique is For You. 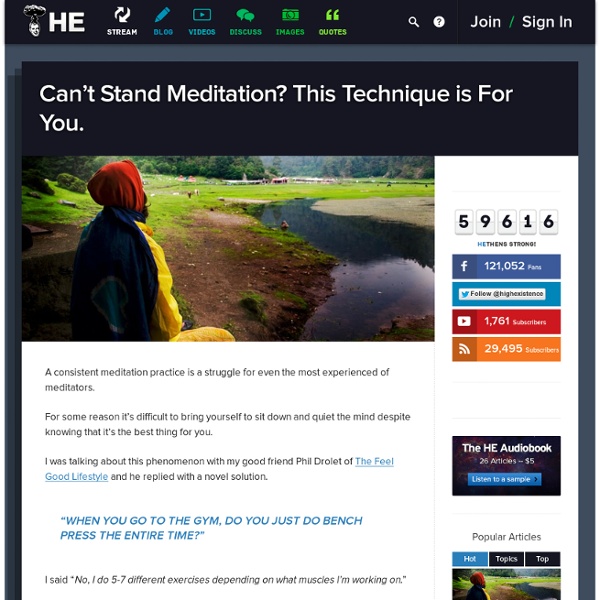 A consistent meditation practice is a struggle for even the most experienced of meditators. For some reason it’s difficult to bring yourself to sit down and quiet the mind despite knowing that it’s the best thing for you. I was talking about this phenomenon with my good friend Phil Drolet of The Feel Good Lifestyle and he replied with a novel solution. “When you go to the gym, do you just do bench press the entire time?”Tweet I said “No, I do 5-7 different exercises depending on what muscles I’m working on.” “Exactly! The Method Instead of doing 20 solid minutes of meditation, Phil breaks it down into 5 4-minute intervals of different practices. 1-4 min — Breathing Focus 5-8 min — Your Favorite Mantra 9-12 min — Loving/Kindness 13-16 min — Gratitude 17-20 min — Intention Visualization This not only makes your session go by quickly, but also allows you to energize many different parts of your psyche and energy body. Is this a cop out? Yes and no. The Takeaway

Look Into Your Mind “Zen does not confuse spirituality with thinking about God while one is peeling potatoes. Zen spirituality is just to peel the potatoes.” - Alan Watts Tweet I am a guest here, so I’ll start with this. The mission of HighExistence says the site aims to… When I first started learning about Zen Buddhist philosophy, I wouldn’t have been able to tell you whether or not it encompassed all of these things. Now, I definitely can.

Origins and Techniques of Monarch Mind Control Monarch Programming is a method of mind control used by numerous organizations for covert purposes. It is a continuation of project MK-ULTRA, a mind-control program developed by the CIA, and tested on the military and civilians. The methods are astonishingly sadistic (its entire purpose is to traumatize the victim) and the expected results are horrifying: The creation of a mind-controlled slave who can be triggered at anytime to perform any action required by the handler. 12 Little Known Laws of Karma (That Will Change Your Life) What is Karma? Karma is the Sanskrit word for action. It is equivalent to Newton’s law of ‘every action must have a reaction’.

Magic Mushrooms Expand Your Mind And Amplify Your Brain’s Dreaming Areas. Here’s How Psychedelic drugs alter consciousness in a profound and novel way that increases the breadth and fluency of cognition. However, until recently, we were unable to offer an explanation for how the brain was altered to account for these effects. In a new study, published in Human Brain Mapping, we scanned the brains of volunteers who had been injected with psilocybin – the chemical found in magic mushrooms which gives a psychedelic experience – and a control group who hadn’t, and discovered two key things: that psilocybin increased the amplitude (or “volume”) of activity in regions of the brain that are reliably activated during dream sleep and form part of the brain’s ancient emotion system; and that psychedelics facilitate a state of “expanded” consciousness – meaning that the breath of associations made by the brain and the ease by which they are visited is enhanced under the drugs. Ego and emotion This finding of a similar pattern to dream activity is intriguing.

Mind Satori – Contemporary Zen. Instantly open your mind to the philosophy of enlightenment with our advice. Over 100,000 people received the same message you did—but you’re different. You acted, others didn't move. You’re about to access insider information. Tree of life The tree of knowledge, connecting to heaven and the underworld, and the tree of life, connecting all forms of creation, are both forms of the world tree or cosmic tree, according to the Encyclopædia Britannica,[2] and are portrayed in various religions and philosophies as the same tree.[3] Religion and mythology[edit] Various trees of life are recounted in folklore, culture and fiction, often relating to immortality or fertility. They had their origin in religious symbolism. Ayyavazhi[edit] In Akilathirattu Ammanai, the source of the Ayyavazhi Mythology, life is considered as an Asura, a power-seeking entity which evolved from nature and survives by getting its energy from nature through offerings, boons from the supreme God-head Siva.

Ten Choices You Will Regret in 10 Years “If only…” These two words paired together create one of the saddest phrases in the English language. Here are ten choices that ultimately lead to this phrase of regret, and how to elude them: 1. Wearing a mask to impress others. – If the face you always show the world is a mask, someday there will be nothing beneath it. Because when you spend too much time concentrating on everyone else’s perception of you, or who everyone else wants you to be, you eventually forget who you really are. Dream Methods & Techniques There are as many ways of working (some would say “playing”!) with a dream as there are dreams and dreamers. Different methods allow us to approach the dream in different ways, thereby shedding light on facets of the dream that might not be available to us upon first glance. Try some of these ideas, and see what you think. How Do I Interpret My Dreams? (Pam Ryan) First, a disclaimer of sorts: Rev.

Sankhyakarika The miracle of a perpetually dynamic Universe is enabled when two opposing factors in an interactive state occur simultaneously. Compression and expansion are two opposing activities but when it takes place simultaneously, activity time is conserved and the dynamic state continues. The theoretical clue, lacking in Physics and Cosmology is the numerical algorithm that defines the threshold of simultaneously interactive states, which is also the key to gravitation phenomena. Are You a “Pre-crastinator”? The views expressed are those of the author and are not necessarily those of Scientific American. Each of us, at times, can be a procrastinator, putting off something that is hard to do or that we don’t want to do. But three researchers at Pennsylvania State University think we humans may also be precrastinators—hurrying to get something done so we can cross it off our mental to-do list, even if the rush ends up being wasteful. The researchers also claim to have coined the term “precrastination.”

3 Censored TED Talks They Do Not Want You To See The current world order establishment has plenty to gain by keeping the people of the planet in the dark about ideas that can lead to a revolution in human consciousness. 1. Graham Hancock – The War on Consciousness Hancock's TED Talk, “The War on Consciousness”, was deliberately removed from YouTube: “Graham Hancock’s talk, again, shares a compelling and unorthodox worldview, but one that strays well beyond the realm of reasonable science. While attempting to critique the scientific worldview, he misrepresents what scientists actually think…” Chris Anderson, [TED].

What Happens to Consciousness When We Die Where is the experience of red in your brain? The question was put to me by Deepak Chopra at his Sages and Scientists Symposium in Carlsbad, Calif., on March 3. A posse of presenters argued that the lack of a complete theory by neuroscientists regarding how neural activity translates into conscious experiences (such as redness) means that a physicalist approach is inadequate or wrong.