How Consciousness Evolved and Why a Planetary "Übermind" Is Inevitable 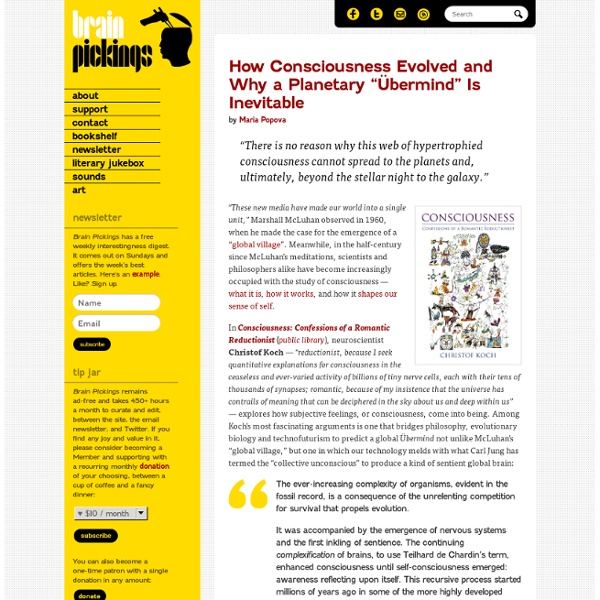 Collective consciousness On transforming conversations around Indigenous health – #IHMayDay One of the clear themes from the recent #IHMayDay Twitter-fest was the value of changing the questions asked and the stories told about the health of Aboriginal and Torres Strait Islander peoples. Arising out of some of those discussions, Mikaela Jade and Ruth Mirams, co-founders of the consultancy, Paramodic, write about four questions they have found to be transformative. Start really closing the gap with these four questions Mikaela Jade and Ruth Mirams write: In the day’s most unsurprising news, Indigenous people throughout Australia (and the world) face poorer health outcomes than non-Indigenous people. Health is defined the state of being free from illness or injury. This frames the conversation focusing on the gap, and not on closing it. If we let people define the health problems in our communities as ‘Indigenous problems’, we let them put us in a box, and we don’t hold them to account for the difference in health outcomes between Indigenous and non-Indigenous Australians.

30 Questions to Ask Yourself Before You Die {Via studioflowerpower on etsy} “Rather than money, than fame, than love…give me truth.” ~ Thoreau I woke up this morning and my life clock marked 30. My first sleep-deprived idea was to pack a small suitcase, get on the first train, move to another country, change my name, change my hair color (or get plastic surgery if needed), and start from scratch. When I don’t know how to deal with life, I hide sometimes. And others, I fight it. By now, I’m good at both: fighting and disappearing. A true warrior doesn’t feel forced to do either, but moves through and with and for life, like water. So after I washed my face and considered the costs of running and those of fighting, I decided to do neither and have some juice instead. {Alkaline Espresso / Click for recipe.} We are a constant process, an event, we’re change. As such, our smaller houses, our temporary homes can only be made of cards. Loving the questions means to love yourself. How much have you loved? You. Comments

Why Australia's Collaborative Economy Is Worth $46 billion - B&T Unlocking the power of the collaborative crowd is a key solution to Australia’s productivity and innovation challenges according to new Deloitte research commissioned by Google Australia. In its Collaborative Economy report, Deloitte Access Economics has put a value on the benefit, and it is big: $46 billion per year – value of faster-growing, profitable businesses with collaboration at their core$9.3 billion per year – value if companies make the most of opportunities to collaborate more. In addition to the economic modelling and research of collaboration’s* place in Australian businesses, 1000 employees and business managers were surveyed – in established markets and new players and across industries and geographies. Other key research findings include: Deloitte Digital national leader Frank Farrall said: “What we have found is a strong correlation between collaboration and the performance of Australian companies.

Is Consciousness Universal? For every inside there is an outside, and for every outside there is an inside; though they are different, they go together. —Alan Watts, Man, Nature, and the Nature of Man, 1991 I grew up in a devout and practicing Roman Catholic family with Purzel, a fearless and high-energy dachshund. It was only later, at university, that I became acquainted with Buddhism and its emphasis on the universal nature of mind. As a natural scientist, I find a version of panpsychism modified for the 21st century to be the single most elegant and parsimonious explanation for the universe I find myself in. We Are All Nature's Children The past two centuries of scientific progress have made it difficult to sustain a belief in human exceptionalism. Consider my Bernese mountain dog, Ruby, when she yelps, whines, gnaws at her paw, limps and then comes to me, seeking aid: I infer that she is in pain because under similar conditions I behave in similar ways (sans gnawing).

Otto Scharmer's Blog 10 insights on the Ego-2-Eco Economy Revolution We live in an age of profound disruption. Global crises, such as finance, food, fuel, water, resource scarcity and poverty challenge just about every aspect of society. Yet, this disruption also brings the possibility of profound personal, societal and global renewal. We need to stop and ask: Why do we collectively create results nobody wants? The book Leading from the Emerging Future: From Ego-system to Eco-system Economies ponders these questions and proposes a new line of thought that is summarized in the 10 insights below. (1) The root cause of today’s global crises originates between our ears — in our outdated paradigms of economic thought. Wherever you go and talk with people, they already know or feel that we are approaching a moment of disruption. The symptoms of the current crises can be summarized in terms of three divides that disconnect self from the primary sources of life: ecological, social, and spiritual.

Out of Character: The Psychology of Good and Evil by Maria Popova What Aristotle has to do with Tiger Woods and the story of the world. The dichotomy of good and evil is as old as the story of the world, and timeless in its relevance to just about everything we do in life, from our political and spiritual views to our taste in music, art and literature to how we think about our simple dietary choices. But while most of us recognize that these concepts of good and bad aren’t always black-and-white categories, we never cease to be surprised when someone or something we’ve perceived as “good” does or becomes something we perceive as “bad,” from an esteemed politician’s transgression to a beloved celebrity’s slip into addiction or scientology or otherwise socially undesirable behavior. In Out of Character: Surprising Truths About the Liar, Cheat, Sinner (and Saint) Lurking in All of Us, researchers David DeSteno and Piercarlo Valdesolo explore this curious disconnect through the rigorous lens of science. Donating = Loving Share on Tumblr

Japanese Zen Buddhist Philosophy 1. The Meaning of the Term Zen The designation of this school of the Buddha-Way as Zen, which means sitting meditation, is derived from a transliteration of the Chinese word Chán. Because the Chinese term is in turn a transliteration of the Sanskrit term dhyāna, however, Zen owes its historical origin to early Indian Buddhism, where a deepened state of meditation, called samādhi, was singled out as one of the three components of study a Buddhist was required to master, the other two being an observation of ethical precepts (sīla) and an embodiment of nondiscriminatory wisdom (prajñā). 2. There are basically two methods utilized in meditation practice in Zen Buddhism to assist the practitioner to reach the above-mentioned goals, together with a simple breathing exercise known as “observation of breath count” (Jpn., sūsokukan); one is the kōan method and the other is called “just sitting” (Jpn., shikan taza), a form of “single act samādhi.” 3. 3.1 The Adjustment of the Body 4. 5. 6. 7. 8.

Communities: the institutions of the 21st century? An interview with Rachel Botsman. Since her influential book about how collaborative consumption is changing the way we live, Rachel Botsman has been a leading actor in the collaborative economy and stimulated important debates about its future. OuiShare Fest Co-chair Francesca spoke to her about her vision of the collaborative economy movement, her current work and what she will bring to OuiShare Fest this May. A lot has happened since your book “What’s Mine is Yours”. Did you imagine the collaborative economy would look the way it does today? Where do you see the movement going now? Rachel Botsman. I am surprised by the accelerated growth and investment in the space but on the other hand, it amazes me that these ideas are being covered by many media outlets as if this economy just emerged. If this is one larger shift, where do you see the connections between consumption and topics such as peer production, 3 D printing, crowdfunding and open education? R. Companies like Airbnb and Uber are indeed becoming very large. R.