What Multitasking Does To Our Brains 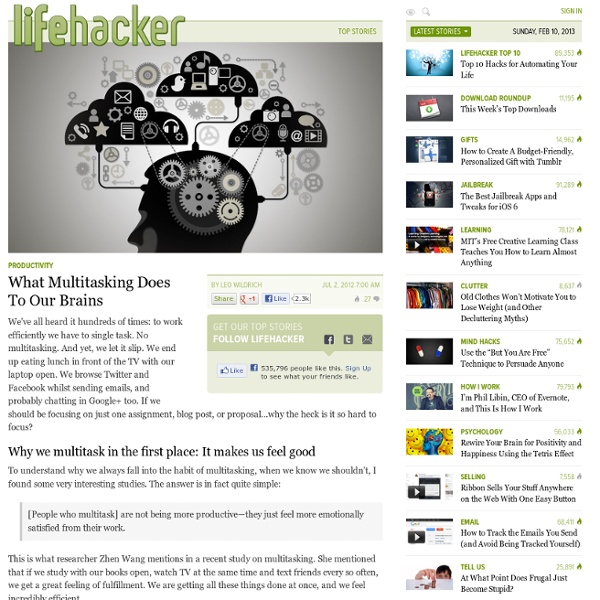 I can definitely understand how focusing on one task at a time allows you to be more productive. However, I also believe that you can benefit from taking a break after ~an hour of working on something, and then doing something else. Making progress on multiple different tasks in this way provides a similar feeling of high productivity, but also allows you to get a feel for exactly how much work you have on your plate. Related:  The Human Psyche

Phantom Finger Points To Secrets In The Human Brain : Krulwich Wonders... When she was born, her right hand wasn't right. Instead of looking like this ... Robert Krulwich/NPR hand 1 ... her thumb was stunted, she had no index finger. Her middle finger and her ring finger were rigid. hand 2 Her name doesn't matter. Its truncated shape is often associated with thalidomide, a drug used during pregnancies in the 1950s and 1960s; RN, now in her late 50s, may have been a thalidomide baby. Born unlucky, she got unluckier. It gets worse. But in her case, this phantom was different from the one she lost. She told her doctors, V.S. hand 3 Which is very strange. In RN's case, her phantom grew a finger that wasn't there. What doctors Ramachandran and McGeoch wanted to know was: How did this happen? But first, let's finish RN's story, because her bad luck stayed bad. hand 4 She asked the doctors for help. They had a plan. So now back to that mysterious finger. hand 5 Sorry, You Can't Do That ... And so, that phantom index finger emerged. It's a lovely idea. Was RN Lying?

How To (Temporarily) Experience A Phantom Limb I placed a coffee cup in front of John and asked him to grab it [with his phantom limb]. Just as he said he was reaching out, I yanked the cup away.“Ow!” he yelled. “Don’t do that!”“What’s the matter?” Get your rubber hand here. The phantom limb syndrome is one more piece of evidence for the fact that we don’t perceive reality as it really is but that we perceive a reality as it is constructed by our own minds. “In short, phantom limbs are a mystery only if we assume the body sends sensory messages to a passively receiving brain. During the course of evolution not only our bodies evolved but so did our cognitive functions, including our sense of self. Some of these tools gives rise to optical illusions. Illusions like these have revealed alot about perceptual processes in psychology. To trick this system and experience an inanimate object as being your own all you have to do is the following (it helps if someone can give a hand):

How do you really know what time it is? This seems backwards: "Let's start with caffeine, which makes your internal clock go faster. If your brain normally stores 60 pulses for 60 seconds, your brain on caffeine stores 100 pulses. Two things happen as a result. First, when you retrieve your time memory, that minute will seem shorter than the 60 seconds it actually took. So a speedy clock means that time gets faster." If normally I do 60 pulses, 1 per second, but caffeine makes it so I take 100 samples in a second, then that second will seem longer, not shorter, when I remember it. Slower internal clocks would speed up time, because relatively, I would have less reference points for any time interval that passed compared to before, and thus it would seem like more time had passed than actually had. This combined with uniqueness of experience is likely the main 2 causes for it seeming like time in general goes by faster as we get older.

Another Perspective on Massive Brain Simulations Henry Markram has become famous as the creator of the world's most expensive brain simulation, but neuroscientists know him best for his pioneering experiments on synapses. Markram was one of the first to investigate the sequential version of Hebb's rule in a systematic way, by varying the time delay between the spiking of the two neurons when inducing synaptic plasticity. (Changes in the synapses, the connection points between cells. One scientist reduced Hebb’s rule to: “Cells that fire together, wire together.”) When I first heard Markram speak at a conference, I also encountered the chain-smoking and charming Alex Thomson, another prominent neuroscientist, who lectured about synapses with bubbling enthusiasm. In a 2009 lecture Markram promised a computer simulation of a human brain within ten years, a sound bite that traveled around the world. Markram didn't keep his indignation secret. The letter marked a new low point in Markram's relationship with IBM.

5 Popular Beliefs That Are Holding Humanity Back Humans believe in a lot of stupid shit, and we do something stupid as a result of those beliefs about, oh, once every five seconds. And sure, most of you reading this are educated types who don't believe in Bigfoot or psychic readings, but there are a whole bunch of equally stupid/harmful superstitions out there that are so commonly held that we don't even think of them as such. Very few of us don't fall victim to at least a few of them. In fact, I'm something of an expert on this because I believe literally hundreds of idiotic things, and also because I wrote a ridiculous best-seller about an apocalypse brought about by people believing in apocalypses. And I say that, in order to keep humanity from imploding, we have to give up believing ... #5. Jupiterimages/Photos.com/Getty Images Every decision they make, and every vote they cast, is done with this in mind. And this affects your life. At this point my young atheist readers are saying, "Exactly! And I think it's bullshit. #4. #3.

For cellist, the music lingers after memory has faded A concert cellist whose memory was virtually wiped out by a brain infection may no longer remember the names of the composers whose work he once played before admiring audiences. But he can remember and recognize virtually every note of their compositions, and even more remarkably, can learn and commit to memory new pieces of music he did not know before a raging case of herpes encephalitis robbed him of his ability to recognize most of his family, recall details of his homeland or remember details of his own life before his illness. The findings from this remarkable case study, presented Sunday in Washington at the Society for Neuroscience's annual meeting, suggest that musical memory may be formed, stored and retrieved using an entirely different set of brain structures from those used for verbal or experiential memories. Copyright © 2014, Los Angeles Times

With nearly 1 in 12 teens diagnosed, is 'Anger Disorder' the next big thing? It seems to me "intermittent explosive disorder" is a cheap, easy diagnosis when the "doctor" is at her wits end about what's happening emotionally/cognitively/psychologically, and I do not think "Anger disorder" contributes much to the discussion regarding mood and developmental disorders. And like the article briefly says, what's the use in pathologizing a reaction that might very well be a symptom to a real underlying cause (e.g. bipolar, schizophrenia, brain tumor, brain damage) considering that reaction, i.e. anger, is itself a relatively common and basic human emotion. Further, there is much ambiguity: what does "explosive" mean and when does it happen? When is anger, explosive or otherwise, an "over-reaction" to a "trivial" cause? When is anger itself inappropriate?

A Cold War Fought by Women Tracy Vaillancourt One of these outfits worn in Dr. Tracy Vaillancourt's study on female aggression provoked a sort of "mean girl" form of indirect aggression. The other attracted little notice at all. Science has come a long way since then, as Dr. The existence of female competition may seem obvious to anyone who has been in a high-school cafeteria or a singles bar, but analyzing it has been difficult because it tends be more subtle and indirect (and a lot less violent) than the male variety. The old doubts about female competitiveness derived partly from an evolutionary analysis of the reproductive odds in ancient polygynous societies in which some men were left single because dominant males had multiple wives. But even in those societies, women were not passive trophies for victorious males. To see how female students react to a rival, researchers brought pairs of them into a laboratory at McMaster University for what was ostensibly a discussion about female friendships.