Albert Einstein- How I See the World 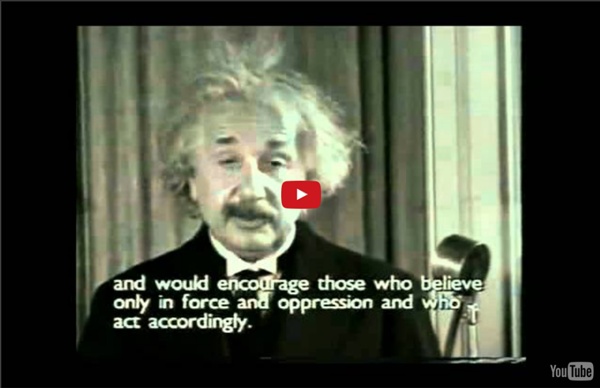 En 1911 déjà, Albert Einstein conseillait d'ignorer les trolls ! Les grands esprits souvent s'estiment, plus souvent encore s'entraident. Ceci était particulièrement vrai avec Albert Einstein. Et à l'heure où nos forums sont remplis de trolls et d'autres "haters", le père de la relativité restreinte prodiguait en 1911 déjà, un sage conseil : ignorer les éternels aigris ! Nous sommes donc en 1911. Albert Einstein envoie alors une lettre réconfortante à sa collègue, lauréate du Prix Nobel, Marie Curie. Nietzsche: Beyond Good and Evil A brilliant young man, he was appointed professor at the University of Basel aged 24 having not even finished his degree. His evanescent philosophical life ended 20 years later when he went insane and died shortly afterwards. Nietzsche's argued that the Christian system of faith and worship was not only incorrect, but harmful to society because it allowed the weak to rule the strong - it suppressed the will to power which was the driving force of human character. Nietzsche wanted people to throw of the shackles of our misguided Christian morality and become supermen - free and titanic. However, without God he felt that the future of man might spiral into a society of nihilism, devoid of any meaning; his aim was for man to realise the lack of divine purpose and create his own values.

Musing Earth Energies Tell Us About Time! Over the course of time on Planet Earth, whole continents have emerged, moved, collided, coalesced, fractured, moved again, and returned to the subterranean depths. Several times. During hundreds of millions of years. I think that human prophecies often attach a little too much importance and drama to a moment or seeming point of transition that we may grasp in our "native" time scale. Osho Talks Osho or Bhagwan Shree Rajneesh was born in 1931 in Central India. He was a charismatic and gifted speaker who became the leader of a worldwide new spiritual movement. It is said that at the age of 21 he attained enlightenment or Samadhi. At the time he was studying philosophy at the University of Saugar.

Tree of Life Web Project The Tree of Life Web Project (ToL) is a collaborative effort of biologists and nature enthusiasts from around the world. On more than 10,000 World Wide Web pages, the project provides information about biodiversity, the characteristics of different groups of organisms, and their evolutionary history (phylogeny). Each page contains information about a particular group, e.g., salamanders, segmented worms, phlox flowers, tyrannosaurs, euglenids, Heliconius butterflies, club fungi, or the vampire squid. ToL pages are linked one to another hierarchically, in the form of the evolutionary tree of life. Starting with the root of all Life on Earth and moving out along diverging branches to individual species, the structure of the ToL project thus illustrates the genetic connections between all living things.

What Difference Does It Make? This is a film about making music. It gets to the bottom of what is needed to be a musician and contemplates on some of the fundamental questions of life itself. It investigates the difficulties that a life in music can create. Shot by award-winning director Ralf Schmerberg, the film genuinely inquires many challenges, phases of progress and accomplishments that musicians experience. Everyone is a musician, everyone has an innate appreciation of music, it's our highest mathematics, it's our greatest language, and it's where the word ends. Humans Will be Kept Between Life and Death in The First Suspended Animation Trials At a hospital in Pittsburgh, surgeons are now allowed to place patients into a state of suspended animation. If a patient arrives with a traumatic injury, and attempts to restart their heart have failed — if they’re on the doorstep of death — they will have their blood replaced with a cold saline solution, which stops almost all cellular activity. At this point, the patient is clinically dead — but if the doctors can fix the injury within a few hours, they can be returned to life from suspended animation by replacing the saline with blood. Or at least, that’s the theory. The technique of suspended animation (or “emergency preservation and resuscitation” as non-sci-fi doctors prefer to call it) was first trialed on pigs in 2002. Roughly once a month, UPMC Presbyterian Hospital in Pittsburgh receives a patient who has suffered a cardiac arrest after some kind of traumatic injury (gunshot, stabbing, etc.), and hasn’t responded to normal methods of restarting their heart.

Knowledge management Knowledge management (KM) is the process of capturing, developing, sharing, and effectively using organizational knowledge.[1] It refers to a multi-disciplined approach to achieving organisational objectives by making the best use of knowledge.[2] An established discipline since 1991 (see Nonaka 1991), KM includes courses taught in the fields of business administration, information systems, management, and library and information sciences.[3][4] More recently, other fields have started contributing to KM research; these include information and media, computer science, public health, and public policy.[5] Columbia University and Kent State University offer dedicated Master of Science degrees in Knowledge Management.[6][7][8] History[edit] In 1999, the term personal knowledge management was introduced; it refers to the management of knowledge at the individual level.[14] Research[edit] Dimensions[edit]