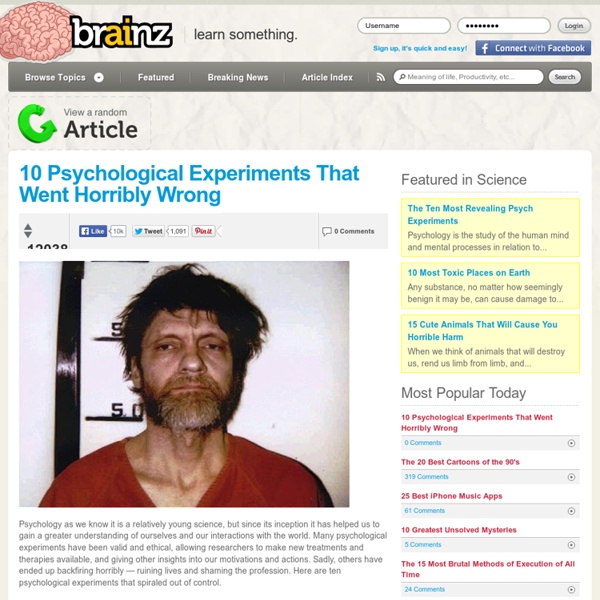 Psychology as we know it is a relatively young science, but since its inception it has helped us to gain a greater understanding of ourselves and our interactions with the world. Many psychological experiments have been valid and ethical, allowing researchers to make new treatments and therapies available, and giving other insights into our motivations and actions. Sadly, others have ended up backfiring horribly — ruining lives and shaming the profession. Here are ten psychological experiments that spiraled out of control. 10. Stanford Prison Experiment Prisoners and guards In 1971, social psychologist Philip Zimbardo set out to interrogate the ways in which people conform to social roles, using a group of male college students to take part in a two-week-long experiment in which they would live as prisoners and guards in a mock prison. 9. Wendell Johnson, of the University of Iowa, who was behind the study Theodore Kaczynski, the Unabomber, also seen top 7. 6. 5. 4. 3. 2. 1. David Reimer

BAR ASSOCIATION HISTORY & WHO OWNS THE U.S. {THE REAL AMERICAN HISTORY NOT TAUGHT IN SCHOOLS ON THE 227th ANNIVERSARY OF THE FIRST 4th Of July 1776} History of “BAR ASSOCIATIONS” The Crown Temple Secret Society of theThird Way Order by Rule of Mystery Babylon. The Templars of the Crown. The governmental and judicial systems within the United States of America, at both federal and local state levels, is owned by the “Crown,” which is a private foreign power. Before jumping to conclusions about the Queen of England or the Royal Families of Britain owning the U.S.A. , this is a different “Crown” and is fully exposed and explained below. We are specifically referencing the established Templar Church, known for centuries by the world as the “Crown.” From this point on, we will also refer to the Crown as the Crown Temple or Crown Templar, all three being synonymous.

Watch Psychology Documentaries Online Free This Fifth Estate documentary was filmed in 1994 and is about a troubled 11 year old called Evan and his family. His parents agreed to have video cameras installed in their home for a 3 month period which resulted in recording Evan’s emotional... In Holding the Sun we get to look into a Canadian family’s struggle to save their son from schizophrenia and cope with the consequences of the condition. Guest post by SumNeuron: NeuroGaming 2014 interview round-up (Videos) Please welcome this guest post by Sumner Magruder, also known as SumNeuron to his thousands of followers on Twitter and Youtube. Sumner is a neuroscience and biomathematics student at Rhodes College, conducting research in the fields of neuroendocrinology (for social behavior) and the molecular mechanisms of memory. He is also a talented and enthusiastic reporter, who interviewed most of the exhibitors at last week’s NeuroGaming expo. At the end of this post you can read more about him. Now, let’s hand it over to Sumner! A conference unlike any other

This Guy’s Wife Rudely Left Him. What He Did With Her Wedding Dress Is EPIC. (20 PICS) Share “Whatever the $%^@# you want.” He obliged. Y-chromosomal Adam In human genetics, Y-chromosomal Adam (Y-MRCA) is a hypothetical name given to the most recent common ancestor (MRCA) from whom all currently living people are descended patrilineally (tracing back only along the paternal or male lines of their family tree). However, the title is not permanently fixed on a single individual (see below). Y-chromosomal Adam is named after the biblical Adam, but the bearer of the chromosome was not the only human male alive during his time.[1] His other male contemporaries could also have descendants alive today, but not, by definition, solely through patrilineal descent. Analogous to Y-chromosomal Adam, Mitochondrial Eve is the woman from whom all living humans are descended matrilineally, who lived about 140,000 to 200,000 years ago in Africa.

Operation Condor: Deciphering the U.S. Role Crimes of WarJuly, 2001 According to recently de-classified files, the U.S. aided and facilitated Condor operations as a matter of secret but routine policy. In mid-April, 2001, Argentine judge Rodolfo Canicoba issued path-breaking international arrest warrants for two former high-ranking functionaries of the military regimes of Chile and Paraguay. These two, along with an Argentine general also summoned by the court, are accused of crimes committed within the framework of Operation Condor. Judge Canicoba presides over one of several cases worldwide investigating abductions and murders linked to Condor, a shadowy Latin American military network created in the 1970s whose key members were Chile, Argentina, Uruguay, Bolivia, Paraguay, and Brazil, later joined by Peru and Ecuador. Condor was a covert intelligence and operations system that enabled the Latin American military states to hunt down, seize, and execute political opponents across borders.

The Death of Robin Williams, And What Suicide Isn't I was coming home from a long day of working when I saw the news on Twitter. Today, probably sometime this morning, Robin Williams, beloved American actor, passed away in his California home. The coroner suspects that he committed suicide, probably from asphyxiation. In the short hour since his death broke to the world, I have seen a number of reactions. I’ve seen people saddened and shocked. Self Running Demonstration - BrainWare Safari Adult Users Say ... I’m Using the Focusing Techniques I Learned "When I was a freshman in high school, my teacher told my dad, 'Leah doesn't know how to think.' As time went on, I realized I had trouble piecing together how certain events culminated in larger happenings. I often forgot events in my own history.

How Embarrassing Email Blunder Became Man's Great Success In the advertising world, producing a commercial that runs during the Super Bowl is like, well, winning the Super Bowl. When creative director Bill Cochran pitched an idea that Bridgestone Tires liked enough to air during the 2010 game, it was a career-defining moment. "It was huge," said Cochran. "To have something on the biggest stage for advertising meant the world to me." Watch the full story on the latest episode of "20/20" online HERE Cochran was soon to have another career-defining moment.