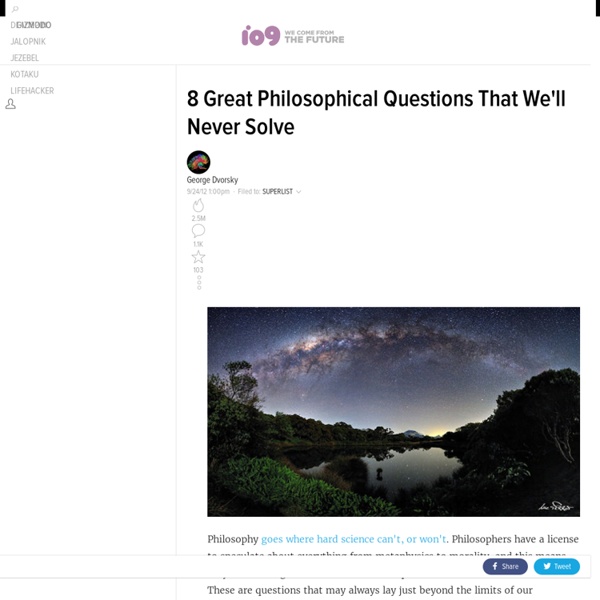 This article reads embarrassingly like something I might have written when I was taking philosophy courses in college, and hence makes me take an instant dislike to it. But I had enough credits to walk out as a philosophy major, so here we go: 1) There is nothing inherently unanswerable about this question. There's even some limited scientific evidence that something is more parsimonious than nothing. Sure, we can ask, "Well why is that true?" but again- once we admit that the question can be approached in a structured fashion, we're drifting away from areas where philosophers can work safe and secure from the dangers of empirical analysis. 2) Again, this is actually a question that has important implications for computer scientists. 3) The problem of free will is a problem of definition, not of answering the question. 4) No. 5) Is there life during life? 6) No. 7) Philosophy works to formalize ethical systems. 8) Platonists are probably the worst thing to happen to philosophy, ever.

An Illustrated Book of Bad Arguments A reader recently wrote in asking if I could share a bit about the process of putting the book together and talk about how the project started. Certainly. I go on two solitary walks every day. 10 Psychological Experiments That Went Horribly Wrong Psychology as we know it is a relatively young science, but since its inception it has helped us to gain a greater understanding of ourselves and our interactions with the world. Many psychological experiments have been valid and ethical, allowing researchers to make new treatments and therapies available, and giving other insights into our motivations and actions. Sadly, others have ended up backfiring horribly — ruining lives and shaming the profession.

10 Incredibly Badass Moments From The History Of Art The Arts Compared to manly professions like logging or bear wrestling, art seems like it’s for sissies. After all, liberal arts majors aren’t exactly known for being badasses. Philosophical Quotes, Thought-Provoking Sayings Related Quotes Hmmm Philosophy Truth Wise Words We are more often treacherous through weakness than through calculation. ~François VI de la Rochefoucault A man with one watch knows what time it is; a man with two watches is never quite sure. ~Lee Segall

We Are a Cosmic Accident: Alan Lightman on Dark Energy, the Multiverse, and Why We Exist by Maria Popova How we drew the one we have from the zillions of possible universes in the cosmic lottery hat. Questions like why our world exists and what nothing is have occupied minds great and ordinary since the dawn of humanity, and yet for all our scientific progress, they continue to do so, yielding only hypotheses rather than concrete answers. But there is something immutably heartening in the difference between the primitive hypotheses of myth, folklore and religion, which handed off such mysteries to various deities and the occasional white-bearded man, and the increasingly educated guesses of modern science. The most compelling example of fine-tuning is dark energy — an invisible and unexpected cosmological force that hides in empty space and works against the universe’s slowing expansion, a sort of “cosmic accelerator pedal” that is speeding up its expansion and causing galaxies to drift away from one another.

10 Theories That Will Alter Your Perception of the World Around You Reality is not as obvious and simple as we like to think. Some of the things that we accept as true at face value are notoriously wrong. Scientists and philosophers have made every effort to change our common perceptions of it. The 10 examples below will show you what I mean. 1. 6 Reasons 'Jurassic World' Brutally Killed Its Biggest Hero If Zara Young, Bryce Dallas Howard's dark-haired assistant, had survived and become the hero, Jurassic World would be a thousand times better. Hear me out. Enough time has passed for us, as a nation, to finally have a serious conversation about Jurassic World. The History of Philosophy … Without Any Gaps On Monday, we told you where you can download Free Courses from Top Philosophers (Foucault, Searle, Russell and the rest). As the day went along, our list grew thanks to reader suggestions, and we also discovered another promising resource — a podcast called “The History of Philosophy Without Any Gaps,” created by Peter Adamson, Professor of Ancient and Medieval Philosophy at King’s College London: Beginning with the earliest ancient thinkers, the series will look at the ideas and lives of the major philosophers (eventually covering in detail such giants as Plato, Aristotle, Avicenna, Aquinas, Descartes, and Kant) as well as the lesser-known figures of the tradition. That’s what Adamson promises, and he doesn’t disappoint. Over the past 34 months, Adamson has produced 136 episodes, each about 20 minutes long, covering the PreSocratics (Pythagoras, Zeno, Parmenides, etc) and then Socrates, Plato and Aristotle. You can access all episodes via these links: iTunes – RSS Feed – Web Site.

Thought Laboratory To almost everyone this would seem a ridiculous question. Even to most mathematicians the existence of Pi (defined here as the ratio of a circle’s circumference to it’s diameter) is taken for granted. But the question of the existence of the class of number to which Pi belongs is a key example of a fundamental question in the philosophical understanding of Mathematics, and indeed of a broader issue in metaphysics and epistemology. List of unsolved problems in philosophy This is a list of some of the major unsolved problems in philosophy. Clearly, unsolved philosophical problems exist in the lay sense (e.g. "What is the meaning of life?", "Where did we come from?"

The 5 Most Clever Ways People Made Hate Groups Look Stupid This world of ours can be a terrible and hateful place. But there's something we can do to combat that toxicity: We can use the most powerful asset that humanity has to offer -- the one thing we have that the animals don't, the thing that inspires, the thing that makes us more than the sum of our parts. You know what we're talking about. What? No, not love. Mockery.

The problem the 'pundits' (scientific or whatever), is that they demand evidence for every experience. What evidence will you give that you 'exist'? You don't experience 'you don't' exist obviously. Truth is self-evident and does not admit explanations or theories. by rravishankar7 Dec 12

I was stoked by these questions. I'm happy that someone has tried to answer these in a logical way in here by satyaraja Dec 8