Look Into Your Mind 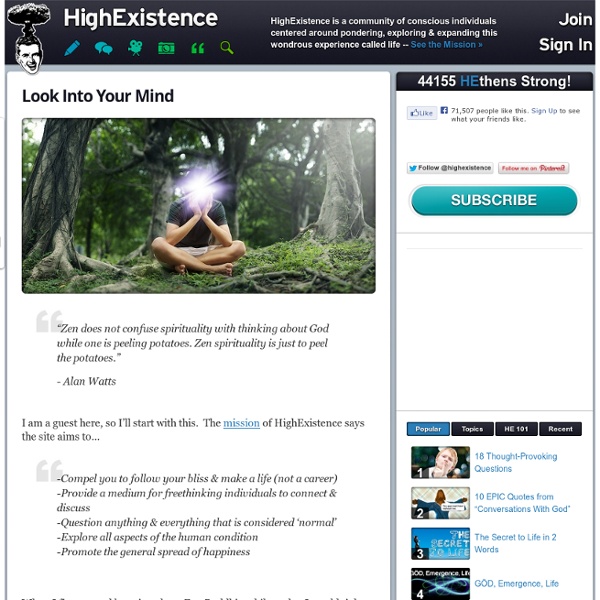 “Zen does not confuse spirituality with thinking about God while one is peeling potatoes. Zen spirituality is just to peel the potatoes.” - Alan Watts Tweet I am a guest here, so I’ll start with this. The mission of HighExistence says the site aims to… When I first started learning about Zen Buddhist philosophy, I wouldn’t have been able to tell you whether or not it encompassed all of these things. Now, I definitely can. Why? Mindfulness (always being in the here-and-now)Compassion (generally being a nice, open person)Honesty (both to others, and also to yourself)Health (exercise, good food, and genuine relationships) Zen values experience over intellectualization; while it’s of high importance to learn, read books, and read stuff like this, you mostly need to get off your ass and really exist! Your happiness, freedom, and understanding of the mind– these all rely on your ability to not resist. Historically, people have worked on doing this in various ways. Don’t fear your own mind.

Can't Stand Meditation? This Technique is For You. A consistent meditation practice is a struggle for even the most experienced of meditators. For some reason it’s difficult to bring yourself to sit down and quiet the mind despite knowing that it’s the best thing for you. I was talking about this phenomenon with my good friend Phil Drolet of The Feel Good Lifestyle and he replied with a novel solution. “When you go to the gym, do you just do bench press the entire time?”

The Art of Living: Vipassana Meditation The following text is based upon a talk given by Mr. S.N. Goenka in Berne, Switzerland. Everyone seeks peace and harmony, because this is what we lack in our lives. From time to time we all experience agitation, irritation, dishar­mony. How Meditation Changes Your Brain Frequency As yogis have known for centuries and scientists can now prove, the benefits of meditation are profound. Meditation is perhaps the most crucial instrument to harness the power of thought, cultivate more peace, clarity and happiness. Learning to train the brain and focus our attention is crucial to thriving and cultivating a peak performance in any endeavor. Longtime psychotherapist Dr.

Mind Satori – Contemporary Zen. Instantly open your mind to the philosophy of enlightenment with our advice. Over 100,000 people received the same message you did—but you’re different. You acted, others didn't move. You’re about to access insider information. By signing up below, you’re agreeing to get more information about Mind Reality Secrets. Consider yourself an “early bird”. 9 Reasons to Try Mindful Walking Regular meditation is the foundation for mind-body wellness and a consciousness-based approach to life. The daily practice can improve quality of sleep and relationship skills, enhance concentration, reduce stress, and provide a deeper connection to spirit. However, daily meditation doesn’t have to mean sitting passively.

Out of Character: The Psychology of Good and Evil by Maria Popova What Aristotle has to do with Tiger Woods and the story of the world. The dichotomy of good and evil is as old as the story of the world, and timeless in its relevance to just about everything we do in life, from our political and spiritual views to our taste in music, art and literature to how we think about our simple dietary choices. But while most of us recognize that these concepts of good and bad aren’t always black-and-white categories, we never cease to be surprised when someone or something we’ve perceived as “good” does or becomes something we perceive as “bad,” from an esteemed politician’s transgression to a beloved celebrity’s slip into addiction or scientology or otherwise socially undesirable behavior.

Sankhyakarika The miracle of a perpetually dynamic Universe is enabled when two opposing factors in an interactive state occur simultaneously. Compression and expansion are two opposing activities but when it takes place simultaneously, activity time is conserved and the dynamic state continues. The theoretical clue, lacking in Physics and Cosmology is the numerical algorithm that defines the threshold of simultaneously interactive states, which is also the key to gravitation phenomena. Newtons gravity constant and the fine structure constant are an approximation of precise axiomatic ratios that governs all phenomena in the Universe. Such an interactive activity among the sea of components in space is called a Vriti or vortex in Sanskrit and can be visualised as shown in the adjacent diagram.

Unlocking the brain's secrets using sound The brain is a reclusive organ. Neurons -- the cells that make up the brain, nerves, and spinal cord -- communicate with each other using electrical pulses known as action potentials, but their interactions are complicated and hard to understand. Just getting access to the brain itself is difficult: inserting devices through the skull into the brain requires surgery. But work by Technion Professors Eitan Kimmel and Shy Shoham, and Ph.D. student Misha Plaksin, may advance our ability to unlock the brain's secrets noninvasively using sound, and perhaps create new treatments for illnesses. The findings were published January 21, 2014 in Physical Review X. Scientists have known for a while that ultrasonic waves can affect cells in many ways.

The Ego and the Universe: Alan Watts on Becoming Who You Really Are by Maria Popova The cause of and cure for the illusion of separateness that keeps us from embracing the richness of life. During the 1950s and 1960s, British philosopher and writer Alan Watts began popularizing Eastern philosophy in the West, offering a wholly different perspective on inner wholeness in the age of anxiety and what it really means to live a life of purpose. We owe much of today’s mainstream adoption of practices like yoga and meditation to Watts’s influence. Alan Watts, early 1970s (Image courtesy of Everett Collection)

3 Techniques to Help You Embrace Change People tend to be wary of change. We try to keep our daily routines consistent and predictable. A last-minute visitor or unexpected dinner plans can put us into a panic. Bigger changes such as a sudden or even planned change in jobs or move can send us into a tailspin. But they don’t have to. 30 Questions to Ask Yourself Before You Die {Via studioflowerpower on etsy} “Rather than money, than fame, than love…give me truth.” ~ Thoreau I woke up this morning and my life clock marked 30. My first sleep-deprived idea was to pack a small suitcase, get on the first train, move to another country, change my name, change my hair color (or get plastic surgery if needed), and start from scratch. When I don’t know how to deal with life, I hide sometimes. And others, I fight it.

Zentangle: Pattern-Drawing as Meditation by Maria Popova If greater creativity and more mental balance are among your new year’s resolutions, look no further than Zentangle — a type of meditation achieved through pattern-making, created by artist duo Maria Thomas and Rick Roberts. Each pattern is built one line at a time, organically combining simple patterns into complex zentangles in unplanned, unexpected ways that grow, change and unfold on the page as you enter an immersive state of flow. Totally Tangled offers a fantastic introduction to the relaxing and beautiful practice through step-by-step instructions and over 100 original tangles. We’re particularly taken with Zentagle because its basic principle — building on simple shapes and combining different patterns into complex creativity — is such a beautiful visual metaphor for our core philosophy of combinatorial creativity. Donating = Loving