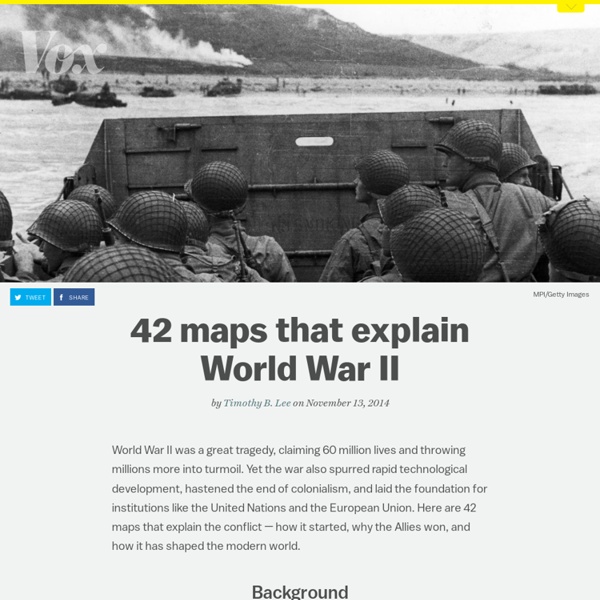 by Timothy B. Lee on November 13, 2014 World War II was a great tragedy, claiming 60 million lives and throwing millions more into turmoil. Yet the war also spurred rapid technological development, hastened the end of colonialism, and laid the foundation for institutions like the United Nations and the European Union. Here are 42 maps that explain the conflict — how it started, why the Allies won, and how it has shaped the modern world. Background World War II, animatedWorld War II was the biggest conflict in world history, with major battles on three continents and some of the largest naval engagements in history. The Axis (and the Soviet Union) attacks Japan and China were already at war in 1937People often describe World War II as beginning in September 1939 when Germany invaded Poland. The Allies besieged Tens of thousands of British troops escape from DunkirkThe war in France didn't go well for the Allies. The USA and USSR are drawn into the conflict The Allies retake Europe and Africa

Saudis bankroll Taliban In interviews with The New York Times, a former Taliban finance minister described how he traveled to Saudi Arabia for years raising cash while ostensibly on pilgrimage. The Taliban have also been allowed to raise millions more by extorting “taxes” by pressing hundreds of thousands of Pashtun guest workers in the kingdom and menacing their families back home, said Vali Nasr, a former State Department adviser. Yet even as private Saudi money backed the Taliban, Saudi intelligence once covertly mediated a peace effort that Taliban officials and others involved described in full to The Times for the first time. Playing multiple sides of the same geopolitical equation is one way the Saudis further their own strategic interests, analysts and officials say.

World War 2 World War 2, also known as the Second World War, was a war fought from 1939 to 1945 in Europe and, during much of the 1930s and 1940s, in Asia. The war in Europe began in earnest on September 1, 1939 with the invasion of Poland by Nazi Germany, and concluded on September 2, 1945, with the official surrender of the last Axis nation, Japan. However, in Asia the war began earlier with Japanese interventions in China, and in Europe, the war ended earlier with the unconditional surrender of Germany on May 8, 1945. The conflict spilled over into Africa, included a handful of incidents in the Americas, and a series of major naval battles.

Essay: Anatomy of the Deep State Rome lived upon its principal till ruin stared it in the face. Industry is the only true source of wealth, and there was no industry in Rome. By day the Ostia road was crowded with carts and muleteers, carrying to the great city the silks and spices of the East, the marble of Asia Minor, the timber of the Atlas, the grain of Africa and Egypt; and the carts brought out nothing but loads of dung. That was their return cargo. — The Martyrdom of Man by Winwood Reade (1871)

World War II Facts, information and articles about World War II, 1939-1945 USS Arizona Pearl Harbor World War II Facts Global inequalities in population, wealth, and religious origin shown in six maps. This map of Canada shows the country's familiar vastness. A single line drawn across its deep south adds a surprising layer of information. The line runs well below the 49th parallel that constitutes that long straight stretch of U.S.-Canada border from Point Roberts, WA to Lake of the Woods, MN (see also #519). Split in two by the U.S. state of Maine poking north, the line traverses four eastern provinces, cutting off the southern extremities of Ontario, Québec and New Brunswick. Nova Scotia is the only province that falls mostly below the line.

America, You Look Like an Arab Country Right Now Dear America, We have been watching the drama of your presidential elections with much interest and curiosity for some time now. It’s hard not to notice the many similarities between our own countries and yours. From fiery inauguration protests and bitter disputes about crowd size, to the intelligence service’s forays into politics and the rise of right-wing extremists, it appears that you are traveling very much in our direction—and at the same time, like us, becoming a curiosity for foreign correspondents trying to explain what’s happening in your region to the world. You might be distraught about where you are headed, but we aren’t!

What would you have done?: Terrible choices people had to make during WW2 How could Japanese airmen “volunteer” to become Kamikaze pilots? Why did the SS believe the Nazi state’s racist values? For nearly 20 years I have tried to answer questions such as these by meeting hundreds of people from the Second World War. I was interested in what motivated the perpetrators, but I also encountered victims confronted with awful choices.

This Map Shows the Hourly Wage You Need to Afford an Apartment in Your State A new report shows that skyrocketing rent prices have put basic living arrangements out of reach in nearly every state for most low-income workers. In order to afford a modest two-bedroom apartment in the U.S., workers on average need to earn at least $20.30 an hour, according to 2016 data from the National Low-Income Housing Coalition (NLIHC). That’s roughly $13 more per hour than the federal minimum wage, and roughly $5 per hour more than the average national $15.42 hourly wage earned by renters last year. What So Many People Don’t Get About the U.S. Working Class My father-in-law grew up eating blood soup. He hated it, whether because of the taste or the humiliation, I never knew. His alcoholic father regularly drank up the family wage, and the family was often short on food money. They were evicted from apartment after apartment. He dropped out of school in eighth grade to help support the family.