A Multimedia History of World War One 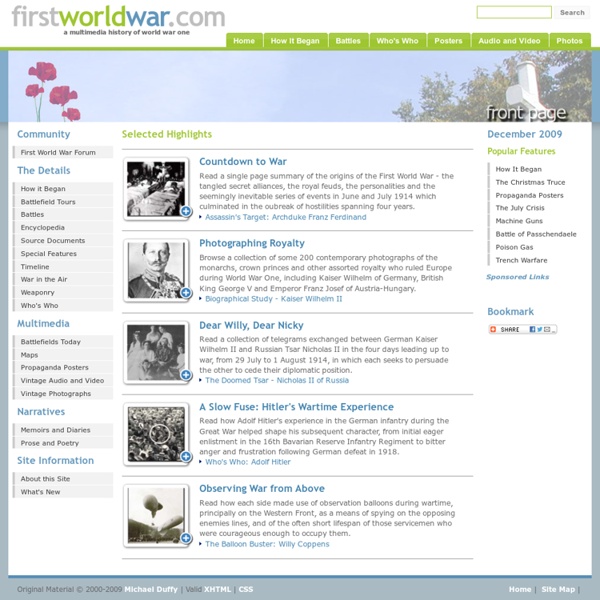 Read a single page summary of the origins of the First World War - the tangled secret alliances, the royal feuds, the personalities and the seemingly inevitable series of events in June and July 1914 which culminated in the oubreak of hostilities spanning four years. Assassin's Target: Archduke Franz Ferdinand Browse a collection of some 200 contemporary photographs of the monarchs, crown princes and other assorted royalty who ruled Europe during World War One, including Kaiser Wilhelm of Germany, British King George V and Emperor Franz Josef of Austria-Hungary. Biographical Study - Kaiser Wilhelm II Read a collection of telegrams exchanged between German Kaiser Wilhelm II and Russian Tsar Nicholas II in the four days leading up to war, from 29 July to 1 August 1914, in which each seeks to persuade the other to cede their diplomatic position. The Doomed Tsar - Nicholas II of Russia

Related:  WWI • Where to find information - World War One

First World War Origins The First World War was caused by the destabilisation of the balance of power in Europe due to the rise of Germany. The war began in 1914 when Austria-Hungary invaded Serbia because of the assassination of an archduke. Countries had made alliances with each other, and soon most of Europe was at war. New Zealand was part of the British Empire, and when Britain declared war on Germany, in August 1914, that meant New Zealand was at war too. The two sides were called the Central Powers (Germany, Austria-Hungary) and the Allies, which included the British Empire, Russia and France.

The Great War: 80 years on Monday, November 2, 1998 Published at 14:42 GMT The Great War: 80 years on It is 80 years since the armistice silenced the guns of World War I. The war lasted from 1914-18, claimed 10 million lives and forever changed the political map of Europe. U.S. World War I Propaganda All images are digitized | All jpegs/tiffs display outside Library of Congress | View All During World War I, the impact of the poster as a means of communication was greater than at any other time during history. The ability of posters to inspire, inform, and persuade combined with vibrant design trends in many of the participating countries to produce thousands of interesting visual works. The Library of Congress Prints & Photographs Division makes available online approximately 1,900 posters created between 1914 and 1920. Most relate directly to the war, but some German posters date from the post-war period and illustrate events such as the rise of Bolshevism and Communism, the 1919 General Assembly election and various plebiscites.

World War I in Photos: Animals at War When the war began, Europe's armies had an understanding of warfare that put the use of cavalry in high regard. Soon, however, the deadly terrain that evolved around trench warfare rendered cavalry attacks nearly useless on the Western Front. But the need for constant resupply, movement of new heavy weaponry, and the transport of troops demanded horse power on a massive scale -- automobiles, tractors, and trucks were relatively new inventions and somewhat rare. Newspaper Pictorials: World War I Rotogravures, 1914-1919 This online collection is drawn from three primary sources: The War of the Nations: Portfolio in Rotogravure Etchings, a volume published by the New York Times shortly after the armistice that compiled selected images from their "Mid-Week Pictorial" supplements of 1914-19; Sunday rotogravure sections from the New York Times for 1914-19; and Sunday rotogravure sections from the New York Tribune for 1916-19. The War of Nations is particularly rich. This volume contains 1,398 rotogravure images with brief descriptive captions, broad organizational headings, and a table of contents; 32 maps that describe military engagements throughout the war; and a 3-page appendix that provides a chronology, statistics, treaty excerpts, and highlights of wartime events. Rotogravure collections were chosen for digitization since few quality originals exist in newspaper format due to paper deterioration.

War Poetry: Ted Hughes: 'Bayonet Charge' I have already said my piece about the AQA GCSE poetry syllabus and what it calls the 'Conflict' cluster. (I take 'cluster' to be the AQA's decorous abbreviation of a more accurate military term which, alas, cannot be used on a family-friendly blog.) Now I will do my best to help those unfortunates brought to this site in search of information about one particular poem: Ted Hughes's 'Bayonet Charge'.

World politics explainer: The Great War (WWI) This is the first in a series of explainers on key moments in the past 100 years of world political history. In it, our authors examine how and why an event unfolded, its impact at the time, and its relevance to politics today. In October 1918, a young man was temporarily blinded on the Western Front and evacuated to hospital. For four long years, he had served in the German Army alongside 11 million men. Whether his blindness came from a gas attack or a sudden bout of nerves is still being debated.

1914-1918-online Languages and the First World War Languages and the First World War is a cross-disciplinary research project exploring change within languages and how languages influenced each other during a period of crisis and conflict. English Words in War-Time, Tracking Language on the Move in WW1 In a series of blogs, the ‘English Words in War-Time’ project tracks a detailed and largely unexamined record of language by Andrew Clark on the Home Front, and the reporting of war in a critical period of social and historical change. Art