OC Static Raid Groups - Lion's Arch Aerodrome (Raids) - OpenCommunity. February 2018 - OpenCommunity. Acquisition of PoF Armor/Weapons — Guild Wars 2 Forums. Hello all~ In the interests of Fashion Wars both to benefit myself and others I thought it might be nice to have a thread where we could discuss all the new armor and weapons that have so far been released in PoF, and how to go about actually acquiring them. 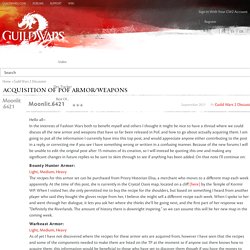 I am going to put all the information I currently have into this top post, and would appreciate anyone either contributing to the post in a reply, or correcting me if you see I have something wrong or written in a confusing manner. Because of the new forums I will be unable to edit the original post after 15 minutes of its creation, so I will instead be quoting this one and making any significant changes in future replies so be sure to skim through to see if anything has been added. On that note I'll continue on: Guildrecruitment: search results - eu raid. Terrible. [Spoilers] How to finish Hearts and Minds story chapter : Guildwars2. Way to beat Hearts and Minds? : Guildwars2. Trouble Logging In : Guild Wars 2 Support. Guild Wars 2′s Living World Returns on July 26.

We’re excited to announce that the first episode of Living World Season 3 is coming to Guild Wars 2 on July 26, along with content and quality-of-life updates for several other game modes! 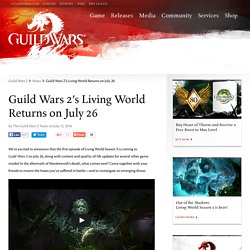 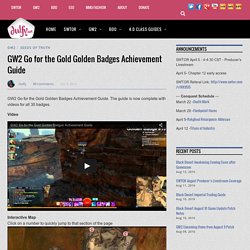 The guide is now complete with videos for all 30 badges. Video Interactive Map Click on a number to quickly jump to that section of the page Badges that can be acquired easier with Experimental Rifle. GW2 Style. Dried Up: Why Dry Top Isn’t Popular (And How to Fix It) Dry Top is way less popular than it was when it was the focus of Living World and the entire map was new. 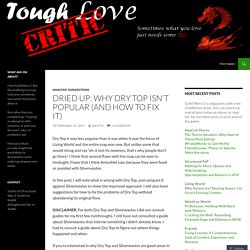 But unlike some that would shrug and say “eh, it lost its newness, that’s why people don’t go there,” I think that several flaws with the map can be seen in hindsight. Flaws that I think ArenaNet saw, because they were fixed or avoided with Silverwastes. In this post, I will note what is wrong with Dry Top, and compare it against Silverwastes to show the improved approach. GPCjsqB.jpg (JPEG Image, 2880 × 1800 pixels) - Scaled (35%) [DTOP] Dry Top Portal runs [NA] : Guildwars2. [Guide]Dry Top Timers - Easymoding T4 : Guildwars2.

Guild Halls: Taken From the Enemy. Hello, citizens of Tyria! 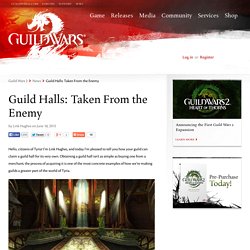 I’m Link Hughes, and today I’m pleased to tell you how your guild can claim a guild hall for its very own. Obtaining a guild hall isn’t as simple as buying one from a merchant; the process of acquiring it is one of the most concrete examples of how we’re making guilds a greater part of the world of Tyria. Taking Initiative. Building Your Guild Hall. So you’ve joined the Guild Initiative, spearheaded an expedition into the jungle, and driven the Mordrem out of your guild hall. 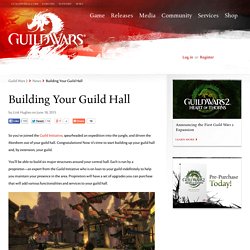 Congratulations! Now it’s time to start building up your guild hall and, by extension, your guild. You’ll be able to build six major structures around your central hall. Rethinking Guilds. Hi, I’m Link Hughes with the Guilds team, and welcome to the next blog in our guild hall series. 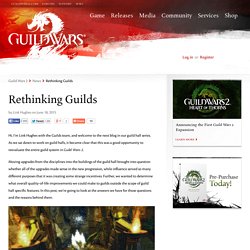 As we sat down to work on guild halls, it became clear that this was a good opportunity to reevaluate the entire guild system in Guild Wars 2. Moving upgrades from the disciplines into the buildings of the guild hall brought into question whether all of the upgrades made sense in the new progression, while influence served so many different purposes that it was creating some strange incentives. Further, we wanted to determine what overall quality-of-life improvements we could make to guilds outside the scope of guild hall specific features. GW2 Point of No Return Living Story Achievements Guide. GW2 Point of No Return Living Story achievements guide. 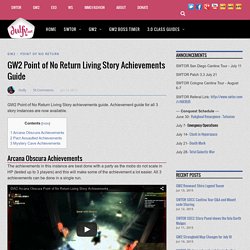 Achievement guide for all 3 story instances are now available. Arcana Obscura Achievements The achievements in this instance are best done with a party as the mobs do not scale in HP (tested up to 3 players) and this will make some of the achievement a lot easier. Guild Wars Eye of the North. Hey Doug! 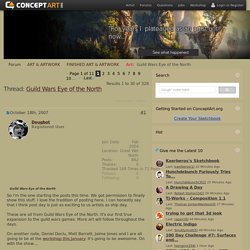 Awesome art.There are a bunch more from Daniel, Jamie, Matt, Aaron, Kakai, Flap...and more. (those guys are too good! Always put me to shame) But here are my humble try to art. (some finished and some aren't. [Guide] Semi-organized Silverwastes guide : Guildwars2. Sector Zuhl. Notice something wrong, missing, or unsatisfactory? 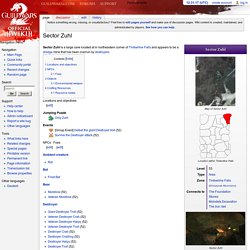 This category will contain a series of achievements specific to the storylines unfolding in Tyria at Southsun Cove, the Crab Toss activity, and some non-specific achievements. Events[edit] New events were introduced to go along with the the release and achievements requiring completion of events: Acquisition[edit] Abair.ie – The Irish Language Synthesiser. Audio - Fear Not This Night Lyrics Confusion. In my quest to learn the lyrics to this song, I realized that most sites mess a few lines up very badly. Throughout my search, I’ve only found one site, a Tumblr account, that manages to get the lyrics right (except for a word or two). So, I’m going to post my version of the lyrics up here. There’s only one line that I’m not sure about; the rest I’m certain of.

Hopefully this will help others trying to learn this song. Fear not this night You will not go astray Though shadows fall Still the stars find their way. GW2 Point of No Return Living Story Achievements Guide. Sand Dune Caverns - Guild Wars 2 Life. Mystic Forge/Equipment. This is a list of equipment and upgrade component recipes for the Mystic Forge. See Mystic Forge for the overview and material, PvP and uncategorized recipes. See Mystic Forge/Other Items for recipe sheet, miniature, gift, tonic and removed recipes. Exotic weapons[edit] Legendary weapons[edit] Primary article: Legendary weapon.

This is the sixth of a series of GW2 class guides written by members of [rT], a European dungeon speed clearing guild. (Kept updated) Introduction The Mesmer is the one class exclusive to the Guild Wars franchise, and we are very glad that it’s here. This light armor class focuses on using combat magic to bend the mind and reality itself, giving it access to various copied and unique mechanics, with of course, illusions being the main trademark. Engineer - Power Grenadier - MetaBattle - Guild Wars 2 Builds. Players Helping Players - Paying for previous living story episodes? Audio - Fear Not This Night Lyrics Confusion.