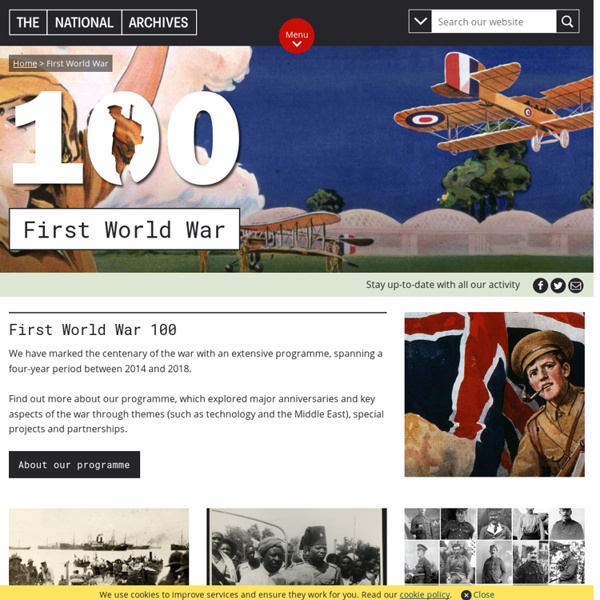 The Causes of World War One June 28 in Sarajevo We'll start with the facts and work back: it may make it all the easier to understand how World War One actually happened. The events of July and early August 1914 are a classic case of "one thing led to another" - otherwise known as the treaty alliance system. Westminster Abbey » Poets of the First World War On 11 November 1985 in Poets' Corner Westminster Abbey Ted Hughes, Poet Laureate, unveiled a memorial stone commemorating poets of the First World War. Sixteen are mentioned by name: The Order of Service for Stone Unveiling (PDF, 300 KB) Richard Aldington (1892-1962) who served in the trenches and achieved success with his novel Death of a Hero based on his war experiences; Laurence Binyon (1869-1943) whose words 'They shall grow not old, as we that are left grow old…', from his war poem 'For the Fallen', are heard each year on Remembrance Sunday. He was buried at Aldworth in Berkshire

Causes of World War I Germany, France, Russia, Austria-Hungary, and Britain attempting to keep the lid on the simmering cauldron of imperialist and nationalist tensions in the Balkans to prevent a general European war. They were successful in 1912 and 1913, but did not succeed in 1914. The crisis came after a long and difficult series of diplomatic clashes between the Great Powers (Italy, France, Germany, Britain, Austria-Hungary and Russia) over European and colonial issues in the decade before 1914 that had left tensions high. In turn these diplomatic clashes can be traced to changes in the balance of power in Europe since 1867.[2] The more immediate cause for the war was tensions over territory in the Balkans.

Don't write first world war women out of history The spy and the nurse. Two women have lingered since the first world war. Mata Hari had been a circus performer and exotic dancer, and therefore satisfied traditional prejudices when she was accused of espionage and shot by the French. Edith Cavell was a brave and pious nurse whom the Germans arrested for helping British soldiers escape occupied Belgium. She too was executed and became a near-martyr. Outbreak of World War I - World War I Almost exactly a century before, a meeting of the European states at the Congress of Vienna had established an international order and balance of power that lasted for almost a century. By 1914, however, a multitude of forces were threatening to tear it apart. The Balkan Peninsula, in southeastern Europe, was a particularly tumultuous region: Formerly under the control of the Ottoman Empire, its status was uncertain by the late 1800s, as the weakened Turks continued their slow withdrawal from Europe. Order in the region depended on the cooperation of two competing powers, Russia and Austria-Hungary. The slumping Austria-Hungary–in which small minorities (Germans in Austria, Magyars in Hungary) attempted to control large populations of restless Slavs–worried for its future as a great power, and in 1908 it annexed the twin Balkan provinces of Bosnia-Herzogovina.

Poetry of The Great War: 'From Darkness to Light'? The historian and literary critic Paul Fussell has noted in The Great War and Modern Memory that, "Dawn has never recovered from what the Great War did to it." He argues that World War I, with its unprecedented trench warfare and mass devastation across the European landscape, left a dark cloud hanging over the world. Despite the patriotism, optimism, and idealism held by the young men who eagerly fought for their respective country, World War I was fraught with widespread destruction and loss. World War I World War I (WWI or WW1), also known as the First World War, or the Great War, was a global war centred in Europe that began on 28 July 1914 and lasted until 11 November 1918. More than 70 million military personnel, including 60 million Europeans, were mobilised in one of the largest wars in history. Over 9 million combatants and 7 million civilians died as a result of the war (including the victims of a number of genocides), a casualty rate exacerbated by the belligerents' technological and industrial sophistication, and the tactical stalemate caused by trench warfare, a grueling form of warfare in which the defender held the advantage.

These rebellious teens resisted the Nazis by beating up Hitler Youth, and some paid with their… On July 17, 1943, the Düsseldorf-Grafenberg branch of the Nazi party reported to the Gestapo on the growth of a new menace. Certain “youngsters,” party members warned, “aged between 12 and 17, hang around into the late evening, with musical instruments and young females. Since this riff-raff is to a large extent outside the Hitler Youth and adopts a hostile attitude toward the organization, they represent a danger to other young people.” The briefing concerned the so-called Edelweiss Pirates, a collection of adolescent groups engaged in rebellious assembly and behavior throughout the western industrial cities of the Reich. Not especially organized, the Edelweiss Pirates were part clique, part gang, part political resistance, and perhaps most of all an emerging subculture.

Lebensraum: Policy or Rhetoric? When the Germans talked of Lebensraum, or ‘living space’, they used the term to denote a perceived need to have enough physical room to provide for themselves comfortably. In particular, it identified the possession of enough land to feed a population large enough to ensure Germany a place on the world stage. Hitler did not just start talking about the need to conquer Lebensraum in 1941; its origins lay much further back than even 1939. Anti-Nazi newspaper columnists (for example in Der Deutsche in Polen) observed during the late 1930s that Hitler’s foreign policy involved something more than just planless initiatives, improvisation and contradictory imperatives. They said that its main direction had been well-established during the mid-1920s. The second volume of Mein Kampf, published in December 1926, contained a chapter entitled ‘Eastern Orientation and Eastern Policy’.