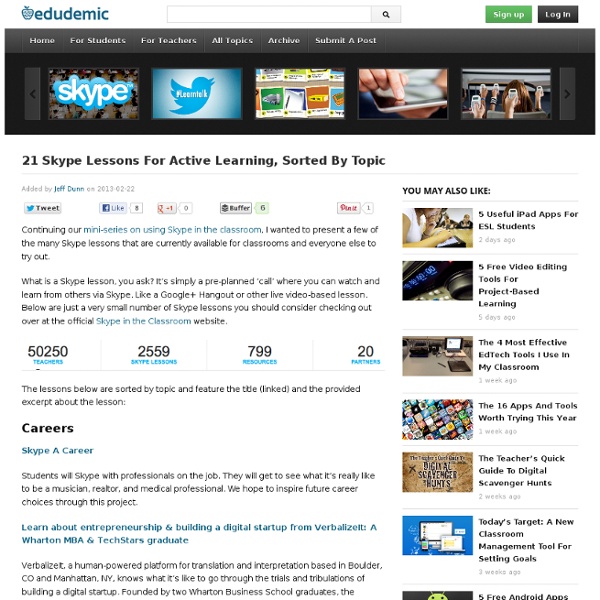 Continuing our mini-series on using Skype in the classroom , I wanted to present a few of the many Skype lessons that are currently available for classrooms and everyone else to try out. What is a Skype lesson, you ask? It’s simply a pre-planned ‘call’ where you can watch and learn from others via Skype. Like a Google+ Hangout or other live video-based lesson. Below are just a very small number of Skype lessons you should consider checking out over at the official Skype in the Classroom website. The lessons below are sorted by topic and feature the title (linked) and the provided excerpt about the lesson: Careers Skype A Career Students will Skype with professionals on the job. Learn about entrepreneurship & building a digital startup from VerbalizeIt: A Wharton MBA & TechStars graduate VerbalizeIt, a human-powered platform for translation and interpretation based in Boulder, CO and Manhattan, NY, knows what it’s like to go through the trials and tribulations of building a digital startup. Related:  world wars

The start of the First World War was a seminal moment in modern history The final weekend of peace was sunny and warm. On the Bank Holiday Monday, day trippers flocked to the most popular resorts, Blackpool and Brighton, largely oblivious of the calamity that was beginning to unfold. At 11pm the following day – Tuesday, August 4 – Britain opened hostilities with Germany following the latter’s invasion of Belgium. Across Europe, a general mobilisation called some 17 million men to arms. The Great War was under way. Throughout the summer there had been talk of war – but not with our Continental neighbours. Why did this catastrophe happen? A century on from the outbreak of war, we remain as perplexed about its provenance today. Part of the problem of asking the questions “how” and “why” is that this exercise soon leads to a search for culpability, something the participants were anxious to avoid once the ghastly consequences of their decision-making became apparent. Moreover, this war was not a self-contained event, but a seminal moment in modern history.

Yale Launches an Archive of 170,000 Photographs Documenting the Great Depression During the Great Depression, The Farm Security Administration—Office of War Information (FSA-OWI) hired photographers to travel across America to document the poverty that gripped the nation, hoping to build support for New Deal programs being championed by F.D.R.’s administration. Legendary photographers like Dorothea Lange, Walker Evans, and Arthur Rothstein took part in what amounted to the largest photography project ever sponsored by the federal government. All told, 170,000 photographs were taken, then catalogued back in Washington DC. The Library of Congress became their eventual resting place. We first mentioned this historic project back in 2012, when the New York Public Library put a relatively small sampling of these images online. But today we have bigger news. Yale University has launched Photogrammar, a sophisticated web-based platform for organizing, searching, and visualizing these 170,000 historic photographs. Bottom image: Destitute pea pickers in California. h/t @pbkauf

The Energy Story - Introduction Energy is one of the most fundamental parts of our universe. We use energy to do work. Energy lights our cities. Energy powers our vehicles, trains, planes and rockets. Energy warms our homes, cooks our food, plays our music, gives us pictures on television. Energy from the sun gives us light during the day. Everything we do is connected to energy in one form or another. Energy is defined as: "the ability to do work." When we eat, our bodies transform the energy stored in the food into energy to do work. Cars, planes, light bulbs, boats and machinery also transform energy into work. Work means moving something, lifting something, warming something, lighting something. There are many sources of energy. The forms of energy we will look at include: Electricity Biomass Energy - energy from plants Geothermal Energy Fossil Fuels - Coal, Oil and Natural Gas Hydro Power and Ocean Energy Nuclear Energy Solar Energy Wind Energy Transportation Energy

A Multimedia History of World War One World War I Allied Propaganda Posters *Disclaimer: World War I Allied Propaganda Posters are dispalyed as historical documents of the era only and is not intended to promote or dissaprove any theories, views, notions, as well as any political, milirtary, social and any other types of actions for or against anybody and/or anything. Some portions of this webpage may contain extremely graphic images and/or text, which may offend sensitive viewers and are not recommended for viewing by persons under the age of 18. Viewer discretion is strongly advised. If you are unsure you wish to proceed, please leave this webpage now. Robaudi, Alcide Théophile. 1778-1783. Robaudi, Alcide Théophile. 2me Emprunt de la Défense Nationale : en avant, armée de l'épargne, c'est pour la patrie.. Faivre, Abel. 3e Emprunt de la Défense Nationale, Crédit Lyonnais : souscrivez. Leroux, Jules Marie Auguste. 3e Emprunt de la Défense Nationale : souscrivez : pour la France qui combat! American Library Association, Library War Service Forsythe, Vic. Stern.

Auschwitz 70th anniversary: Survivors warn of new crimes 27 January 2015Last updated at 13:11 ET Survivors joined together to commemorate the liberation of the camp Auschwitz survivors have urged the world not to allow a repeat of the crimes of the Holocaust as they mark 70 years since the camp's liberation. "We survivors do not want our past to be our children's future," Roman Kent, born in 1929, told a memorial gathering at the death camp's site in Poland. Some 300 Auschwitz survivors returned for the ceremony under a giant tent. Some 1.1 million people, mostly Jews, were killed there between 1940 and 1945, when Soviet troops liberated it. Continue reading the main story “Start Quote Once again young Jewish boys are afraid to wear yarmulkes [skullcaps] on the streets of Paris, Budapest, London and even Berlin” End QuoteRonald S LauderPresident of the World Jewish Congress It is expected to be the last major anniversary event survivors are able to attend in considerable numbers. At the scene: Kevin Connolly, BBC News Bearing witness through drawing