What I Discovered From Interviewing Imprisoned ISIS Fighters 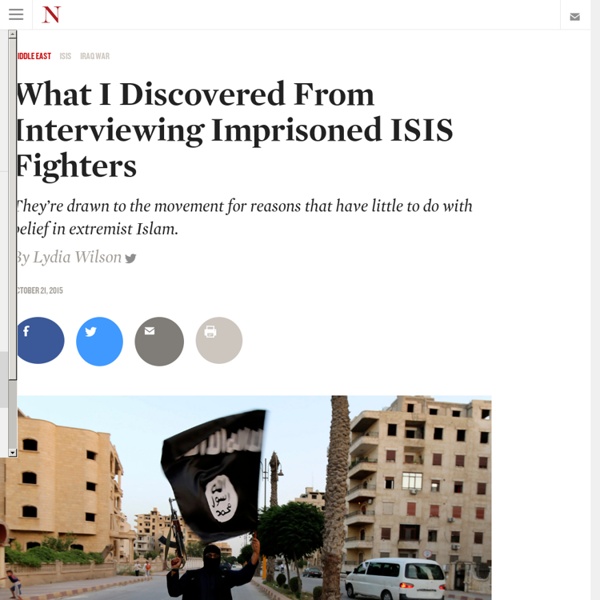 No sooner am I settled in an interviewing room in the police station of Kirkuk, Iraq, than the first prisoner I am there to see is brought in, flanked by two policemen and in handcuffs. I awkwardly rise, unsure of the etiquette involved in interviewing an ISIS fighter who is facing the death penalty. He is small, much smaller than I, on first appearances just a boy in trouble with the police, his eyes fixed on the floor, his face a mask. We all sit on armchairs lined up against facing walls, in a room cloudy with cigarette smoke and lit by fluorescent strip lighting, a room so small that my knees almost touch the prisoner’s—but he still doesn’t look up. I have interviewed plenty of soldiers on the other side of this fight, mostly from the Kurdish forces (known as pesh merga) but also fighters in the Iraqi army (known as the Iraqi Security Forces or ISF), both Arab and Kurdish. One evening we watch a documentary on BBC Arabic profiling Brig. Why did he do all these things? Related:  HI7

Syria's war: A 5-minute history by Max Fisher and Johnny Harris on October 14, 2015 After four-plus years of fighting, Syria's war has killed at least 250,000 people and displaced 12 million people. And, though it started as a civil war, it's become much more than that. Like this video? Something important you'll notice: As more outside groups get involved in the war, each escalates by backing their side, and then a rival will also get involved to back the other side. You'll also see that the countries getting involved don't always have the same objectives, and can end up working against even their allies. For more, read our brief history of Syria's war, from the rise of the opposition to the refugee crisis to why the US and Russia ended up intervening.

Efforts to Rein In Arbitration Come Under Well-Financed Attack A television ad during the Republican presidential debate last Tuesday depicted pale bureaucrats rubber-stamping the word “DENIED” on the files of frustrated Americans, beneath a red banner of Senator evoking a Communist apparatchik. Continue reading the main story The ad attacks the , a federal agency created with Ms. Warren’s strong backing after the 2008 mortgage crisis. What the ad did not say: Its sponsor wants to rein in the agency in part because of its efforts to restrict arbitration — the widespread practice in corporate America of requiring customers and employees to resolve disputes not in the courts, but in private proceedings with neither judge nor jury. In fact, arbitration is one of the reasons the ad’s sponsor, American Action Network, wanted to blast the agency with the $500,000 campaign, the group said. Continue reading the main story Matt Webb, a senior vice president of the chamber’s Institute for Legal Reform, called the bureau’s work “deeply flawed and incomplete.”

Turkey could cut off Islamic State’s supply lines. So why doesn’t it? | David Graeber In the wake of the murderous attacks in Paris, we can expect western heads of state to do what they always do in such circumstances: declare total and unremitting war on those who brought it about. They don’t actually mean it. They’ve had the means to uproot and destroy Islamic State within their hands for over a year now. How could Isis be eliminated? But instead, YPG-controlled territory in Syria finds itself placed under a total embargo by Turkey, and PKK forces are under continual bombardment by the Turkish air force. It might seem outrageous to suggest that a Nato member like Turkey would in any way support an organisation that murders western civilians in cold blood. And then there are Erdoğan’s actual, stated positions. Commentators predicted that with Jarablus gone, Raqqa would soon follow. How has Erdoğan got away with this? The exact relationship between Erdoğan’s government and Isis may be subject to debate; but of some things we can be relatively certain.

From U.S., the ABC's of Jihad In the twilight of the Cold War, the United States spent millions of dollars to supply Afghan schoolchildren with textbooks filled with violent images and militant Islamic teachings, part of covert attempts to spur resistance to the Soviet occupation. The primers, which were filled with talk of jihad and featured drawings of guns, bullets, soldiers and mines, have served since then as the Afghan school system's core curriculum. Even the Taliban used the American-produced books, though the radical movement scratched out human faces in keeping with its strict fundamentalist code. As Afghan schools reopen today, the United States is back in the business of providing schoolbooks. But now it is wrestling with the unintended consequences of its successful strategy of stirring Islamic fervor to fight communism. Last month, a U.S. foreign aid official said, workers launched a "scrubbing" operation in neighboring Pakistan to purge from the books all references to rifles and killing.

Anonymous vs. the Islamic State For John Chase, the breaking point came on Jan. 7, when al Qaeda-linked militants gunned down 12 people at the Paris office of Charlie Hebdo. Subsequent attacks by a gunman affiliated with the Islamic State would take five more lives. Watching triumphant jihadi messages bounce across Twitter, the 25-year-old Boston native was incensed. They needed to be stopped. Although Chase’s formal education ended with high school, computers were second nature to him. For more than a year, a ragtag collection of casual volunteers, seasoned coders, and professional trolls has waged an online war against the Islamic State and its virtual supporters. The effort has ebbed and flowed, but the past nine months have seen a significant increase in both the frequency and visibility of online attacks against the Islamic State. Chase, who has since shifted his focus to other pursuits, boasts a story typical of those volunteers who work to track and counteract the Islamic State’s online propaganda apparatus.

US soldiers 'killed Afghan civilians for sport and collected fingers as trophies' | US news Twelve American soldiers face charges over a secret "kill team" that allegedly blew up and shot Afghan civilians at random and collected their fingers as trophies. Five of the soldiers are charged with murdering three Afghan men who were allegedly killed for sport in separate attacks this year. Seven others are accused of covering up the killings and assaulting a recruit who exposed the murders when he reported other abuses, including members of the unit smoking hashish stolen from civilians. In one of the most serious accusations of war crimes to emerge from the Afghan conflict, the killings are alleged to have been carried out by members of a Stryker infantry brigade based in Kandahar province in southern Afghanistan. According to investigators and legal documents, discussion of killing Afghan civilians began after the arrival of Staff Sergeant Calvin Gibbs at forward operating base Ramrod last November. One soldier said he believed Gibbs was "feeling out the platoon".

The Cascade of Errors That Led to the U.S. Airstrike on an Afghan Hospital Here are some of the findings from a military investigation. The crew of the AC-130 gunship set out without anormal mission brief or a list of no-strike targets. The aircraft took off in haste because of an unrelated emergency and then was diverted to strike a building that Americans believed had been taken over by the Taliban. As a result, the crew did not have a list of no-strike targets, including the hospital, which was nearby. The hospital was hit in an airstrike on Oct. 3 Hospital hit in airstrike The New York Times|Satellite image by DigitalGlobe via Bing Maps Communications systems onthe aircraft stopped working. Key electronic systems failed during the flight, preventing the crew from sending video or sending and receiving electronic messages. The crew could not locate the intended target. As the aircraft approached Kunduz, it moved outside of its normal flight path because the crew thought it was targeted by a surface-to-air missile. Location of American commander on the ground

Bush Administration Ignored Multiple Detailed Pre-9/11 Warnings Although there has been previous evidence suggesting that the Bush administration had warning of the 9/11 attacks, new details have emerged in a report from Politico that confirm that the Bush administration was made aware of several warnings of an impending attack. In an interview with Politico, former counter-terrorism chief Cofer Black explain how they first warned President Bush and his administration in May of 2001 of a potential terrorist attack. Says Black: “It was very evident that we were going to be struck, we were gonna be struck hard and lots of Americans were going to die.” Authors of the report interviewed 12 former CIA directors for a new documentary, The Spymasters. Black, along with former CIA director George Tenet, had presented a plan, “the Blue Sky paper”, that called for a joint CIA and military campaign to deal with the Al Qaeda threat. The administration’s response was that they wanted nothing to do with it. “To me it remains incomprehensible still.

Afghan drone campaign said to kill fraction of intended targets A joint U.S. military and intelligence campaign in northeastern Afghanistan that relied on drones to kill leaders of Al Qaeda, the Taliban and other groups mostly killed other unintended targets, according to a Thursday report by The Intercept. According to documents leaked to The Intercept, the Operation Haymaker campaign killed 219 people between January 2012 and February 2013, but only 35 were the intended targets. During one five-month stretch of the campaign, nearly nine out of 10 people who died in airstrikes were not direct targets, The Intercept reported. All 200 deaths, however, were declared "EKIA," or “enemy killed in action," even though there was no definitive evidence they were enemy targets. “If there is no evidence that proves a person killed in a strike was either not a [military-age male], or was a MAM but not an unlawful enemy combatant, then there is no question,” said the source who leaked the documents to The Intercept. U.S.

Strike on Jihadi John unfolded quickly, but hunt took months WASHINGTON The U.S.-British missile strike believed to have killed "Jihadi John" came together at lightning speed, but was months in preparation. Shortly before midnight Thursday, two U.S. MQ-9 Reaper drones and one British MQ-9 cruised above Raqqa, the Syrian heart of the Islamic State's self-declared caliphate that stretches deep into Iraq, U.S. officials said. The aircraft's controllers monitored two people who had entered a parked car. One, they were convinced, was Mohammed Emwazi, the British computer programming graduate who catapulted to infamy in August 2014 when he presented the beheading of American journalist James Foley, the first of several grisly videos in which he presided over the decapitations of foreign hostages. Brandishing a knife, dressed head to toe in black, and speaking with a London accent, Emwazi became known as "Jihadi John", the most potent symbol of the group's brutality and a high-value target for U.S. and British intelligence agencies.

U.S. Soldiers Told to Ignore Sexual Abuse of Boys by Afghan Allies Photo KABUL, Afghanistan — In his last phone call home, Lance Cpl. Gregory Buckley Jr. told his father what was troubling him: From his bunk in southern Afghanistan, he could hear Afghan police officers sexually abusing boys they had brought to the base. “At night we can hear them screaming, but we’re not allowed to do anything about it,” the Marine’s father, Gregory Buckley Sr., recalled his son telling him before he was shot to death at the base in 2012. He urged his son to tell his superiors. Rampant sexual abuse of children has long been a problem in , particularly among armed commanders who dominate much of the rural landscape and can bully the population. The policy has endured as American forces have recruited and organized Afghan militias to help hold territory against the Taliban. After the beating, the Army relieved Captain Quinn of his command and pulled him from Afghanistan. Four years later, the Army is also trying to forcibly retire Sgt. Mr. Word of Mr. Mr.