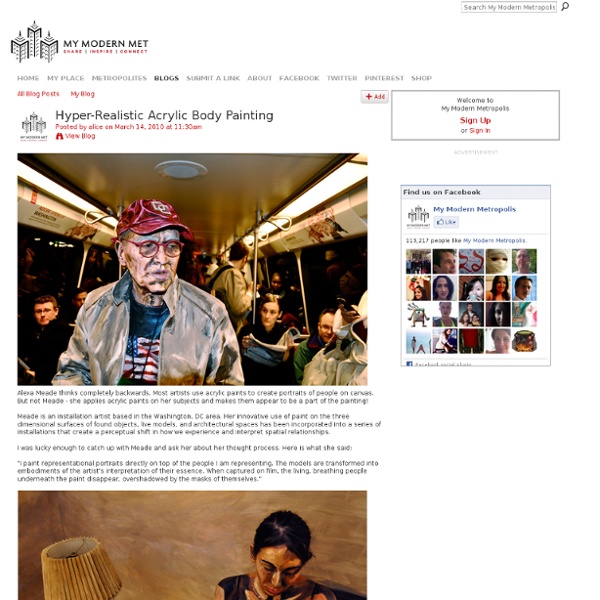 Bruno Catalano - In Search of Missing Pieces ‘In Search of Missing Pieces’ is a series of original sculptures by French artist Bruno Catalono. Caught my eye big time! Via My Modern Met Carved Book Landscapes by Guy Laramee (click images for detail) For the better part of three decades multidisciplinary artist Guy Laramee has worked as a stage writer, director, composer, a fabricator of musical instruments, a singer, sculptor, painter and writer. Among his sculptural works are two incredible series of carved book landscapes and structures entitled Biblios and The Great Wall, where the dense pages of old books are excavated to reveal serene mountains, plateaus, and ancient structures. Of these works he says: So I carve landscapes out of books and I paint Romantic landscapes.

Great Resume Designs that Catch Attention-and Got People Hired - StumbleUpon Inspiration June 21, 2011 When applying for a job, you have no choice but to do your best to outshine competition. Even before winning an interview, your qualifications (or in some instance, your character) are already judged by the resume you’ve submitted. It is then important to make your resume or CV as honest, concise, and striking as possible. If you are looking forward to a creative position, you will be expected to come up with something grand and extra creative as well. Take a look at how other designers compose their creative resumes.

Amazing Water Drawings with Ink To mark “World Water Day” (March 22nd), Solidarites International has launched an ad campaign to raise awareness about contaminated water that kills so many people in the world. It is a video developed by agency BDDP Unlimited, produced by Hush, and directed by Clement Beauvais. Official notes about the project: [...] Today, it is estimated that 3.6 million people, including 1.5 million children under the age of 5, die every year of diseases borne by unhealthy water, making it the world’s leading cause of death.Yet the public isn’t aware of it and political leaders do not demonstrate the drive it takes to end the terrible deaths. Link via iGNANT

sidewalk chalk guy sidewalk chalk guy «« back to gprime.net all material copyrighted by its original creator | Tony Orrico Mesmerizing performance drawings by artist and dancer Tony Orrico. He is a human spirograph, performing works for up to 4 hours continuously! Watch the videos below! Top 12 Banksy Pieces of 2010 12.) San Francisco Banksy is the gold standard when it comes to urban street art. His legendary reputation has only grown since the 2010 release of his intriguing movie, "Exit Through the Gift Shop" (which is streaming now). To promote the film, Banksy went into super-overdrive and attacked city walls across North America like there was no tomorrow. The result is an incredible collection of thought-provoking, clever work that only the brilliant Banksy could come up with.

A young artist The talent of this guy is amazing! Hsin-Yao Tseng – artists who managed to get a bachelor’s degree at the Academy of Fine Arts in San Francisco. His talent surprises, soft colors and shades make his paintings breathe. Kris Kuksi Makes Demons in Our Mind Come Alive (14 Pics) Seven Deadly Sins What would happen if someone can tap into your darkest nightmares and your most hidden fears? Would they see a world full of aggression and hate? A world where man struggles with his sins, where no one can escape from a hell of mental anguish, suffering, and guilt? This is the world of Kris Kuksi. As Kuksi has stated, "human mind creates this world and humans are what keep it a reality.

We declare the world as our canvas106 of the most beloved Street Art Photos – Year 2011 More info. Let us begin with this words that come as a response to the photo above: “There´s tools and colours for all of us, to lend from nature to make the world more understandable and beautiful”. 1# Click on a photo and you make it bigger and can post a comment on it. 2# Make sure that you read the story in the end!

3D Paintings on Panes of Glass Using multiple layers of clear glass, Canada based David Spriggs and Chinese born Xia Xiaowan, transform flat artwork into 3D sculptures. Viewers are treated to different shifting perspectives of the works based on where they stand in the art space. Spriggs work revolves around powerful explosive imagery, often resembling storms, cosmic blasts or firework like explosions. Xiawan’s “spatial paintings,” which often feature distorted figures, are drawn individually using colored pencil on tinted glass. Only when these pieces are combined on their floor racks do the images create the whole hologram like effect. Art genius: Nine-year-old painter tipped for greatness after buyers from across the world snap up his work Only started painting lessons in 2008Work bought by international collectors for tens of thousands of poundsPaints three pictures a weekProud mum has written book about his prodigal success By Daily Mail Reporter Published: 13:59 GMT, 12 July 2012 | Updated: 20:04 GMT, 12 July 2012 Nine-year-old Kieron Williamson's latest set of paintings sold within minutes fetching £250,000.