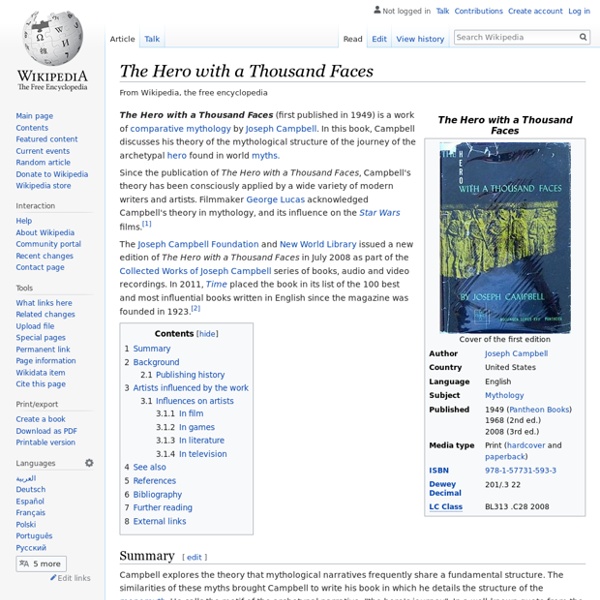 The Hero with a Thousand Faces (first published in 1949) is a work of comparative mythology by Joseph Campbell. In this book, Campbell discusses his theory of the mythological structure of the journey of the archetypal hero found in world myths. Since the publication of The Hero with a Thousand Faces, Campbell's theory has been consciously applied by a wide variety of modern writers and artists. Filmmaker George Lucas acknowledged Campbell's theory in mythology, and its influence on the Star Wars films.[1] Summary[edit] Campbell explores the theory that mythological narratives frequently share a fundamental structure. A hero ventures forth from the world of common day into a region of supernatural wonder: fabulous forces are there encountered and a decisive victory is won: the hero comes back from this mysterious adventure with the power to bestow boons on his fellow man.[3] In laying out the monomyth, Campbell describes a number of stages or steps along this journey. Background[edit]

Leaves of Grass ~ Walt Whitman Leaves of Grass is a poetry collection by the American poet Walt Whitman (1819–1892). Though the first edition was published in 1855, Whitman spent his entire life writing and re-writing Leaves of Grass,[1] revising it in several editions until his death. This resulted in vastly different editions over four decades—the first a small book of twelve poems and the last a compilation of over 400 poems. The poems of Leaves of Grass are loosely connected and each represents Whitman's celebration of his philosophy of life and humanity. This book is notable for its discussion of delight in sensual pleasures during a time when such candid displays were considered immoral. Publication history and origin[edit] Initial publication[edit] The first edition was very small, collecting only twelve unnamed poems in 95 pages.[7] Whitman once said he intended the book to be small enough to be carried in a pocket. The title Leaves of Grass was a pun. Republications[edit] "Deathbed edition"[edit] Analysis[edit]

A People's History of the US ~ Howard Zinn A People's History of the United States is a 1980 non-fiction book by American historian and political scientist Howard Zinn. In the book, Zinn seeks to present American history through the eyes of the common people rather than political and economic elites. A People's History has been assigned as reading in many high schools and colleges across the United States.[1] It has also resulted in a change in the focus of historical work, which now includes stories that previously were ignored.[2] The book was a runner-up in 1980 for the National Book Award. It has been frequently revised, with the most recent edition covering events through 2005. In 2003, Zinn was awarded the Prix des Amis du Monde Diplomatique for the French version of this book, Une histoire populaire des États-Unis.[3] More than two million copies have been sold. Reviews have been mixed. In a 1998 interview, Zinn said he had set "quiet revolution" as his goal for writing A People's History. Overview[edit]