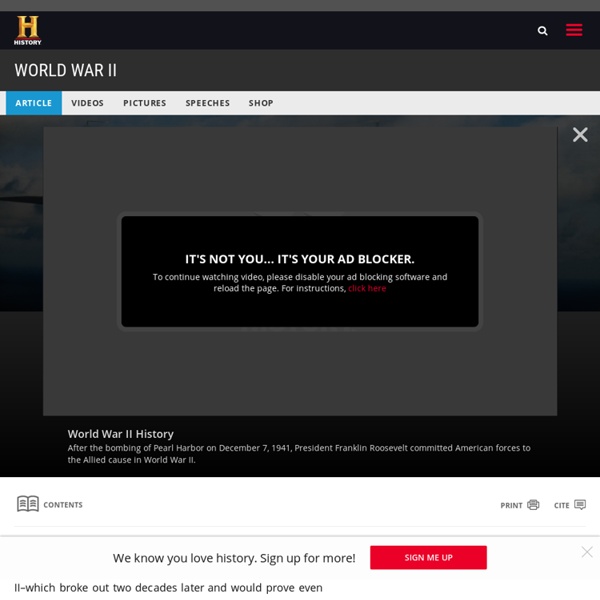 In North Africa, British and American forces had defeated the Italians and Germans by 1943. An Allied invasion of Sicily and Italy followed, and Mussolini’s government fell in July 1943, though Allied fighting against the Germans in Italy would continue until 1945. On World War II’s Eastern Front, a Soviet counteroffensive launched in November 1942 ended the bloody Battle of Stalingrad, which had seen some of the fiercest combat of the war. On June 6, 1944–celebrated as “D-Day”–the Allied began a massive invasion of Europe, landing 156,000 British, Canadian and American soldiers on the beaches of Normandy, France. Related:  WWII

The Holocaust - World War II Beginning in late 1941, the Germans began mass transports from the ghettoes in Poland to the concentration camps, starting with those people viewed as the least useful: the sick, old and weak and the very young. The first mass gassings began at the camp of Belzec, near Lublin, on March 17, 1942. Five more mass killing centers were built at camps in occupied Poland, including Chelmno, Sobibor, Treblinka, Majdanek and the largest of all, Auschwitz-Birkenau. From 1942 to 1945, Jews were deported to the camps from all over Europe, including German-controlled territory as well as those countries allied with Germany. The heaviest deportations took place during the summer and fall of 1942, when more than 300,000 people were deported from the Warsaw ghetto alone. Though the Nazis tried to keep operation of camps secret, the scale of the killing made this virtually impossible.

World War I - HISTORY World War I, also known as the Great War, began in 1914 after the assassination of Archduke Franz Ferdinand of Austria. His murder catapulted into a war across Europe that lasted until 1918. During the conflict, Germany, Austria-Hungary, Bulgaria and the Ottoman Empire (the Central Powers) fought against Great Britain, France, Russia, Italy, Romania, Japan and the United States (the Allied Powers). Thanks to new military technologies and the horrors of trench warfare, World War I saw unprecedented levels of carnage and destruction. By the time the war was over and the Allied Powers claimed victory, more than 16 million people—soldiers and civilians alike—were dead. Archduke Franz Ferdinand Tensions had been brewing throughout Europe—especially in the troubled Balkan region of southeast Europe—for years before World War I actually broke out. READ MORE: 8 Events Leading to the Outbreak of World War I Kaiser Wilhelm II World War I Begins READ MORE: World War I Battles: Timeline The Western Front

Battle of Britain The Battle of Britain was a struggle between the German Luftwaffe (commanded by Hermaan Göring) and the British Royal Air force (headed by Sir Hugh Dowding’s Fighter Command) which raged over Britain between July and October 1940. The battle, which was the first major military campaign in history to be fought entirely in the air, was the result of a German plan to win air superiority over Southern Britain and the English Channel by destroying the British air force and aircraft industry. Hitler saw victory in the battle as a prelude to the invasion of Britain (codenamed Operation Sealion). In May 1940, German forces had overrun Belgium, the Netherlands and northern France using Blitzkrieg (‘Lightening War’) tactics. The Luftwaffe’s first disadvantage was that it was neither trained nor equipped for the long range operations which became part of the battle. The climax of the battle came on 15 September, a day in which the Luftwaffe lost 56 planes and the RAF 28.

These Photos From Auschwitz Are the Only Surviving Visual Evidence of Victims' Last Moments | HistoryBuff | The Future of History The Auschwitz Album, as it is referred to, is the only surviving visual account of the great atrocities that occurred at Auschwitz-Birkenau. Donated to Yad Vashem by Lilly Jacob-Zelmanovic Meier, the photos were taken in May or June 1944 by either Ernst Hofmann or Bernhard Walter, two SS men whose task was to take ID photos and fingerprints of the inmates. Early summer 1944 was the apex of the deportation of Hungarian Jewry. View several of the heartbreaking photos below. Since the railroad car has no convenient steps, the old Jews have to be assisted in disembarking. The Jews who just arrived are taking care of their property as they are under the assumption they will be needing it. Two of Lili Jacob's siblings - Sril (Israel) and Zelig. The line of Jewish men on the left is advancing toward a SS man, In the background, the selection of the Jewish women is taking place. These Jewish men have just entered Birkenau as prisoners. Clothes confiscated from the arriving Jews.

Famous People of World War Two Influential people who caused, influenced and fought during the Second World War. Adolf Hitler (1889 – 1945) Dictator of Nazi Germany from 1933-45. During the 1930s, Hitler sought to gain ‘lebensraum’ for Germany – claiming Austria, Czechoslovakia and finally invading Poland. Hitler’s initial success encouraged him to invade Russia, which ultimately would over-stretch his war-machine. Hitler’s regime also pursued the extermination of Jews and other ‘non-Aryan’ minorities in concentration camps across Europe. He committed suicide in May 1945 – shortly before Germany’s final surrender. The Big Three The Big Three were the Allied leaders of Churchill, Stalin and Roosevelt, who represented Great Britain, Soviet Union and the United States in the alliance against Germany and Japan. Winston Churchill (1874 – 1965) – Churchill was elected Prime Minister of the UK in May 1940, when Britain and her Empire stood alone against Hitler. Franklin D. (1882 – 1945) – US President 1932 – 1945. J.

untitled United States President Woodrow Wilson and others spoke of World War I as “the war to end all wars” or “to make the world safe for democracy.” In the twenty years that followed, these high ideals ran afoul of a flawed and retributive peace treaty, the unwillingness of the United States and other non-European powers to assume responsibilities for maintaining peace, newly established dictatorships, national ambitions, and world economic collapse. As horrific as World War I was, it proved the prelude and groundwork for an even more appalling conflict, a world wide struggle that would take the lives of over 60 million people … World War II. Early in World War II the Allies committed to the principles of the Atlantic Charter as a definition of their war aims.

Touching Stories From Both Survivors and Saviors of German Concentration Camps - History Daily Apr 152016 Throughout the winter and spring of 1945, as Allied forces recaptured German territories from both the east and the west, the Nazis’ horrifying secret began to unfold before their very eyes — millions of people had been imprisoned and killed in Nazi concentration camps. These are the stories of the liberators and the survivors — when the day of freedom finally arrived. Photo: Keystone-france/Gamma-Keystone/Getty Images Photo: Pinterest Photo: Pinterest Photo: RT.com Photo: Wikimedia Commons Photo: Pinterest Photo: Eric Schwab/AFP/Getty Images Photo: Wikimedia Commons Photo: New York Daily News

Spanish-American War - HISTORY The Spanish-American War was an 1898 conflict between the United States and Spain that ended Spanish colonial rule in the Americas and resulted in U.S. acquisition of territories in the western Pacific and Latin America. Causes: Remember the Maine! The war originated in the Cuban struggle for independence from Spain, which began in February 1895. Spain’s brutally repressive measures to halt the rebellion were graphically portrayed for the U.S. public by several sensational newspapers engaging in yellow journalism, and American sympathy for the Cuban rebels rose. The growing popular demand for U.S. intervention became an insistent chorus after the still-unexplained sinking in Havana harbor of the American battleship USS Maine, which had been sent to protect U.S. citizens and property after anti-Spanish rioting in Havana. War Is Declared Spain announced an armistice on April 9 and speeded up its new program to grant Cuba limited powers of self-government. But the U.S. Scroll to Continue

World War II Facts For Kids | WWII Information What started World War II? › Find out about the events and people that led to the war. What started World War II? The Allies › Britain, the US, and the Soviet Union were called the Allied countries. The Allies of World War II › The Axis › Germany, Italy, and Japan were called the Axis countries. The Axis › Children in wartime › What was life like for a child during World War II? Children in wartime › Battle of Britain › British and German air forces fought a fierce battle called the Battle of Britain. Battle of Britain › Rationing › The war caused a shortage of food in many countries. Rationing › Pearl Harbor › In 1941, Japan launched an attack on the US base at Pearl Harbor that changed the course of the war. Pearl Harbor › Battlefield medicine › The war caused many casualties (people injured or killed). Battlefield medicine › Crackingcodes › Messages were encoded to stop the enemy getting information. Cracking codes › The Holocaust › The Holocaust › Normandy landings › Normandy landings › The atomic bomb ›