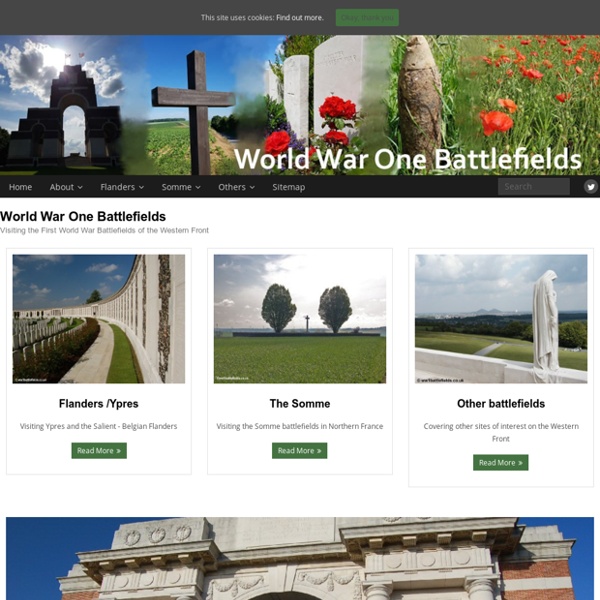 Digital Collection - NZ You are here: Home > Digital Collection > Wars & conflict Heritage Digital Collection Home The Canterbury Aviation (N.Z.) Co.: the first hundred pilots iTunes U course and Multi-Touch Book on the First World War! Whether you’re a school student or a WW1 enthusiast, you can now discover the different causes leading to the First World War with our new iTunes U course and Multi-Touch Book. The book and related course, available on iTunes in both Dutch and English, use fascinating historical materials to bring the months and years before the outbreak of war into focus. Many of these sources are drawn from Europeana 1914-1918, our dedicated WW1 site which brings together hundreds of thousands of items related to the war from heritage institutions and members of the public across Europe.

First War War Poetry The First World War Poetry Digital Archive is an online repository of over 7000 items of text, images, audio, and video for teaching, learning, and research. The heart of the archive consists of collections of highly valued primary material from major poets of the period, including Wilfred Owen, Isaac Rosenberg, Robert Graves, Vera Brittain, and Edward Thomas. This is supplemented by a comprehensive range of multimedia artefacts from the Imperial War Museum, a separate archive of over 6,500 items contributed by the general public, and a set of specially developed educational resources. These educational resources include an exciting new exhibition in the three-dimensional virtual world Second Life. Freely available to the public as well as the educational community, the First World War Poetry Digital Archive is a significant resource for studying the First World War and the literature it inspired.

The Mounted Soldiers of Australia — Australian Light Horse Association Horses have played a special role in the story of Australia. For the first hundred years of European settlement they were the only means of transport across most of our huge country. Outside the few cities, ability to ride a horse was almost as basic as the ability to walk. The value of the mounted soldier in Australia was first shown in 1804 when redcoats of the New South Wales Corps set out in pursuit of a large force of rebel convicts who had broken out of the Castle Hill Prison Farm. WW100 New Zealand A selection of sites and sources for learning about the history of the First World War from a New Zealand perspective, and the role your family members might have played in it. Soldiers inside the YMCA library in Beauvois, France. Ref: 1/2-013635-G. Courtesy of Alexander Turnbull Library, Wellington, New Zealand. Starting Places

AE2 enters the Dardanelles, 1915 - History (9) - ABC Splash - Overview This media resource contains content that shows images of war. World War I was fought on land, in the air, on the sea and below it. What role did AE2, an Australian submarine, play in the campaign to take Turkey's Gallipoli Peninsula in 1915? Anzac Day Collection This documentary gave NZ viewers, for the first time, a Turkish view of the Gallipoli story. Produced for TVNZ and Turkish TV, it focuses on four young people, two Turks and two New Zealanders, descended from Gallipoli veterans, as they explore the grim reality of their ancestors’ experience. Six Māori Battalion soldiers camped in Italian ruins wait for night to fall.

World War I Allied Propaganda Posters *Disclaimer: World War I Allied Propaganda Posters are dispalyed as historical documents of the era only and is not intended to promote or dissaprove any theories, views, notions, as well as any political, milirtary, social and any other types of actions for or against anybody and/or anything. Some portions of this webpage may contain extremely graphic images and/or text, which may offend sensitive viewers and are not recommended for viewing by persons under the age of 18. Viewer discretion is strongly advised. If you are unsure you wish to proceed, please leave this webpage now. Robaudi, Alcide Théophile. 1778-1783. America owes France the most unalterable gratitude : 1917- -- .

Te Ara - New Zealand Origins The First World War was caused by the destabilisation of the balance of power in Europe due to the rise of Germany. The war began in 1914 when Austria-Hungary invaded Serbia because of the assassination of an archduke. Countries had made alliances with each other, and soon most of Europe was at war. New Zealand was part of the British Empire, and when Britain declared war on Germany, in August 1914, that meant New Zealand was at war too.