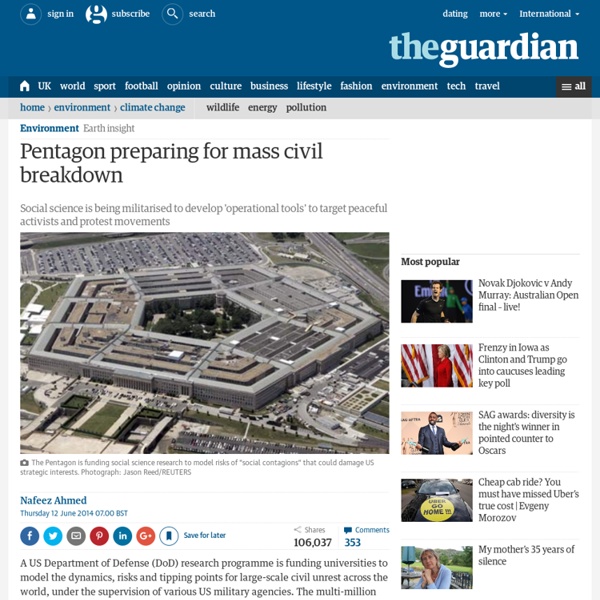 A US Department of Defense (DoD) research programme is funding universities to model the dynamics, risks and tipping points for large-scale civil unrest across the world, under the supervision of various US military agencies. The multi-million dollar programme is designed to develop immediate and long-term "warfighter-relevant insights" for senior officials and decision makers in "the defense policy community," and to inform policy implemented by "combatant commands." Launched in 2008 – the year of the global banking crisis – the DoD 'Minerva Research Initiative' partners with universities "to improve DoD's basic understanding of the social, cultural, behavioral, and political forces that shape regions of the world of strategic importance to the US." Twitter posts and conversations will be examined "to identify individuals mobilised in a social contagion and when they become mobilised." Among my questions, I asked:

How the Feds Are Recruiting Spies at Campuses Across the US Photo Credit: Vladimir Gjorgiev/Shutterstock.com June 11, 2014 | Like this article? Join our email list: Navy SEAL Drops Bombshell On FOX: Says Government Is CREATING Conditions To Impose MARTIAL LAW Ex-US Navy SEAL Ben Smith joins Fox News and drops a bombshell on the US government by revealing that the government ITSELF is CREATING the conditions necessary to impose martial law here in America. This is a must watch video for those who feel martial law is merely believed by conspiracy theorists. Veterans and US Navy SEALS see the same thing!

Britain’s “Emergent Corporate Universities”: Academia in the Service of International Capital and the Military Industrial Complex Rand Corporation Sets the UK Research Agenda In 2009 the UK Department of Business told universities that their role was to make a ‘bigger contribution to economic recovery, and future growth and be central to the country’s economic performance in the twenty-first century’ (1). This is the so-called Impact Agenda – one of the more overt manifestations of the neoliberal corporate takeover of UK universities. It’s no surprise to discover that Research Impact, like so many of the ‘initiatives’ inflicted on higher education these last 30 years, is the brainchild of a freemarket thinktank: the RAND Corpration.

Study Strengthens Link Between Prenatal Pesticide Exposure and Autism Autism Spectrum Disorder (ASD) affects about 1 in 68 children in the United States, and a combination of genetic and environmental factors, along with complications during pregnancy have been associated with ASD diagnoses. A new study from the National Institute of Environmental Health Services has strengthened the link between prenatal exposure to agricultural pesticides and ASD. The study’s findings have been published in the journal Environmental Health Perspectives. In 2003, University of California-Davis began the Childhood Autism Risks from Genes and Environment (CHARGE) study.

Securitization, risk management, and the new university Talk delivered by Amanda Armstrong at the 2015 MLA Subconference. Vancouver, B.C./Coast Salish Territory. 1/9/15. The germ for this presentation emerged as I was reading Ruth Wilson Gilmore’s Golden Gulag. Her second chapter argues that the prison construction boom in 1980s California was a response, on the part of those managing capital and governing the state, to four surpluses, including of capital, labor, land, and state capacity.

Ministry of Defence funding research into online habits A branch of the Ministry of Defence is funding postgraduate research into the culture of computer hackers, crowd behaviour at music festivals and football matches, and the impact of Twitter, Facebook and online conspiracy theories in times of crisis. The MoD's Defence Science and Technology Laboratory (DSTL) pays six-figure sums to support individual PhD students to help understand the rapidly evolving world of cyberspace and the way in which social media have become an integral part of daily life. While some of the PhD projects in the £10m programme have conventional military applications – such as researching technology to support underwater drones, and the development of clothing with fully embedded electronics – £97,487 of funding for research at King's College London into "the rise of the digital insurgency" is typical of the new direction. The project aims to "deliver new and innovative ways to understand and influence online behaviour".

These Popular Plastic Bottles May Be Messing With Your Hormones A new study finds that many BPA-free brands advertised as safe may be anything but. —Mariah Blake on Mon. June 16, 2014 6:00 AM PDT Photo illustration by Carolyn Perot Many BPA-free plastics may leach BPA-like chemicals that are potentially damaging to human health, a dilemma Mother Jones explored in our exposé on the plastics industry earlier this year. Veterans Arrested For Anti-Obama Facebook Posts – Police Militarized For Veterans Veterans are being arrested by Secret Service for making anti-Obama Facebook posts, sometimes the very next day after creating a post – a practice which has been going on for quite some time. All the while, our police force is being militarized at an alarming rate, with veterans being cited as one reason why. This is revealed in a statement made last month by Sgt.

Fukushima’s Children are Dying Some 39 months after the multiple explosions at Fukushima, thyroid cancer rates among nearby children have skyrocketed to more than forty times (40x) normal. More than 48 percent of some 375,000 young people—nearly 200,000 kids—tested by the Fukushima Medical University near the smoldering reactors now suffer from pre-cancerous thyroid abnormalities, primarily nodules and cysts. The rate is accelerating. More than 120 childhood cancers have been indicated where just three would be expected, says Joseph Mangano, executive director of the Radiation and Public Health Project.

Why Anonymous is going to war with British higher education When the British newspaper the Guardian reported Jan. 7 that the Ministry of Defence (MoD) was funding university research into Anonymous, hacktivism, and surveillance (and had been for at least a year), it was only a matter of time before someone, somewhere in the hacker collective took retaliatory action. Within about four hours of the article’s publication, #OpPhDPounds was on. It’s an Anonymous action that targets U.K. universities studying cyberwar, even at arm’s length.

This Shocking Report From Fukushima Will Leave Your Jaw On The Floor (Before It's News) This video proves what engaged citizens already know. Every government on the planet is at war with their citizens.