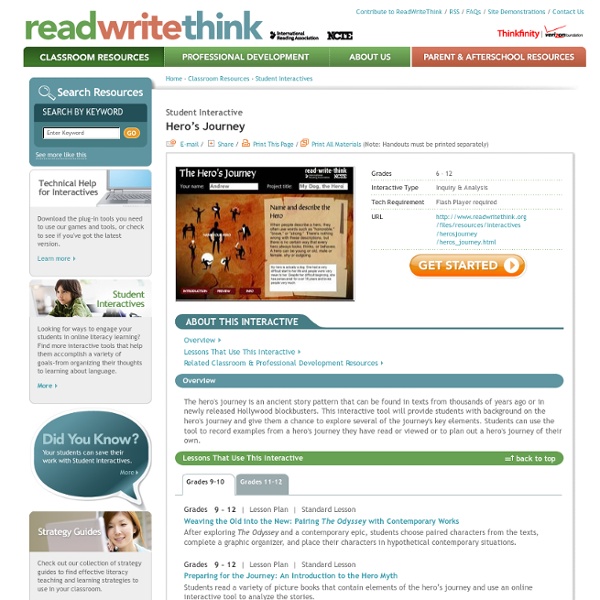 The hero's journey is an ancient story pattern that can be found in texts from thousands of years ago or in newly released Hollywood blockbusters. This interactive tool will provide students with background on the hero's journey and give them a chance to explore several of the journey's key elements. Students can use the tool to record examples from a hero's journey they have read or viewed or to plan out a hero's journey of their own. Grades 6 – 8 | Lesson Plan | Standard Lesson Fantastic Characters: Analyzing and Creating Superheroes and Villains Students analyze characterization by creating their own superheroes or super-villains, complete with related gadgets and settings. Grades 7 – 12 | Calendar Activity | July 31 J.K. Students are encouraged to think about why people challenge Harry Potter books, do a Web Quest that allows them to research the issue, and decide whether the books should be banned from the public library. Grades 7 – 12 | Calendar Activity | January 3

The Hero with a Thousand Faces The Hero with a Thousand Faces (first published in 1949) is a seminal work of comparative mythology by Joseph Campbell. In this book, Campbell discusses his theory of the journey of the archetypal hero found in world mythologies. Since publication of The Hero with a Thousand Faces, Campbell's theory has been consciously applied by a wide variety of modern writers and artists. How to Write a News Article (with Downloadable Sample Articles) Edit Article Four Parts:Sample ArticlesPlanning Your ArticleWriting Your News ArticleProofing Your ArticleCommunity Q&A Writing a news article is different from writing other articles or informational pieces, because news articles present information in a specific way.

Writing Prompts, Blogging Prompts, Story Topic Generators, Photo Inspiration Writing : Creative Writing & Blogging Prompts Topic Starters, Picture Prompts, and Thought-Provoking Questions for You to Answer "The best learning comes in the doing, and writing from prompts engenders doing."— Judy Reeves Many writers and bloggers seek out articles, prompts, and story starters to get their creative juices flowing. Writing task two Task description You will be given a discussion topic. Your task is to write a 250 word essay on that topic. You should spend around 40 minutes on the task. Beowulf and Star Wars BEOWULF AND STAR WARS with references to Episode III and Jung THE FOREMOST MYTHOLOGIST OF OUR DAY, JOSEPH CAMPBELL wrote a book called The Hero With a Thousand Faces, in which he noted that whatever the name or face: Achilles, Odysseus, Telemachus, Oedipus, Beowulf, Capts. Kirk, Picard, Janeway, Sisko or Luke Skywalker and even Darth Vader, the quest and the adventure is the same.

20 Terrifying Two-Sentence Horror Stories. I Didn't Think It Was Possible Until #5... When The Hair On My Neck Stood Up March 5, 2014 Ever since I was a little kid I've loved sharing ghost stories around a campfire which is probably why I love watching horror movies. And every single time I finish watching one, well, a good one... I kick myself for not picking out a comedy instead. Persuasion Map Grades 6 – 12 | Lesson Plan Persuade Me in Five Slides! Creating Persuasive Digital Stories 5 Easy Ways to Incorporate Writing in Your Classroom - Teach 4 the Heart Earlier this week I explained 4 advantages of incorporating writing in any classroom. I bet many of you were thinking Sure, that sounds great, but it also sounds like a lot of work. Thankfully, that’s just not the case. Including writing in your classroom can be really easy. And it doesn’t have to take much time either.

The Hero's Quest |Arthurian Legend| |Beowulf| |Classical Mythology| |Creation Stories| |Fairy Tales and Folktales| |Homer, The Iliad and The Odyssey| |Mythology Main Page| The all-purpose guide to epic moviesThis chart shows different archetypal roles at work in Harry Potter, Star Wars, and other movies: the hero, the threshold guardian, the trickster, etc. An Anti-Hero of One's OwnThis TED-ED video (4:11) explores the pattern of the anti-hero using references to Fahrenheit 451 and 1984, among others. The Impact of Digital Tools on Student Writing and How Writing is Taught in Schools A survey of 2,462 Advanced Placement (AP) and National Writing Project (NWP) teachers finds that digital technologies are shaping student writing in myriad ways and have also become helpful tools for teaching writing to middle and high school students. These teachers see the internet and digital technologies such as social networking sites, cell phones and texting, generally facilitating teens’ personal expression and creativity, broadening the audience for their written material, and encouraging teens to write more often in more formats than may have been the case in prior generations. At the same time, they describe the unique challenges of teaching writing in the digital age, including the “creep” of informal style into formal writing assignments and the need to better educate students about issues such as plagiarism and fair use.

7 essential habits of incredibly happy people Make these commitments to increase your happiness and improve your life. [TWEET] In her book “The How of Happiness: A Scientific Approach to Getting the Life You Want,” University of California-Riverside professor of psychology Sonja Lyubomirsky explains how each of us has the ability to attain greater happiness. According to her research, 50 percent of our happiness is determined by our genetics.

The Turing Test The Turing Test Submitted by admin on 21 June, 2011 - 00:00 Alan Turing proposed a test inspired by a party game known as the 'Imitation Game', in which a man and a woman go into separate rooms, and guests try to tell them apart by writing a series of questions and reading the typewritten answers the man and the woman send back. This activity involves students writing a series of questions for online 'robots'. PreparationMake sure the two websites listed below are working OK before you go into the lesson. Christopher Vogler's "Hero's Journey" (Revised July 2007) I spent nearly sixteen years avoiding reading anything of substance by (Hollywood) story theorists such as Syd Field, John Truby, Christopher Vogler, Robert McKee and others. As co-creator of the Dramatica theory of story, I didn't want to influence my development of Dramatica so I avoided direct interaction with competing theories. In 2006 I decided to lift my self-imposed ban. I figured my understanding of Dramatica was mature enough that I didn’t have to worry about "contaminating" it by exposure to the competing theories. It was past time that I figured out how other story theories are similar and dissimilar to Dramatica, why they are different (assuming they are), and what those similarities and differences mean.