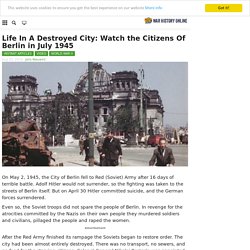 Adolf Hitler would not surrender, so the fighting was taken to the streets of Berlin itself. But on April 30 Hitler committed suicide, and the German forces surrendered. D-Day - D-Day by the Numbers Interactive - HISTORY.com. You're almost done! 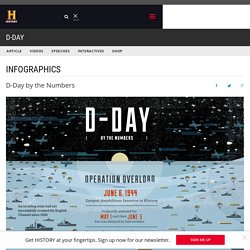 You will soon receive an activation email. Once you click on the link, you will be added to our list. If you do not receive this email, please contact us. To ensure delivery to your inbox, add us to your address book. Oops, there's a problem. At this time we are unable to complete your subscription.This email address has been previously opted out from receiving any emails from A+E Networks. You have already subscribed to this list. If you completed your subscription and still have not received an email, please contact us. Second World War. Beginnings When Germany invaded Poland in September 1939, France and Britain declared war on Germany. 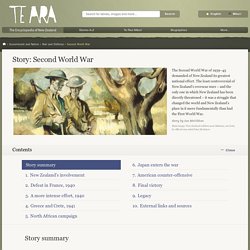 New Zealand also declared war and became part of the Allies. It agreed to supply produce to Britain and provide troops. Defeat in France Poland was quickly defeated. More intense effort, 1940 New Zealanders from the army, air force and navy took part in the Battle of Britain, in which Germany was prevented from invading Britain. New Zealand and the Second World War - Second World War - overview. New Zealand in World War II. Home. Did Britain stand alone in WW2? The history fuelling both sides of the Brexit debate.

Ever since the word ‘Brexit’ was first coined, commentators on both sides of the debate have been trying to bolster their arguments with appeals to history. 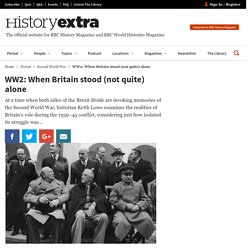 In particular, they like to invoke popular memories of the Second World War. For Brexiteers, the war represents a shining example. They see it as a time when Britain escaped the dangers of mainland Europe, stood up to the bullies in Berlin and emerged victorious. During the war, they say, Britain stood alone. After Brexit, it can do so again. For Remainers, by contrast, the war stands as a stark warning to us all. Rabaul & Montevideo Maru Society. 'You put your whole heart in it': Two RAAF pilots recall serving in World War II. Douglas Sandow still marches on Anzac Day every year, and has led his squadron for between 10 and 15 years. 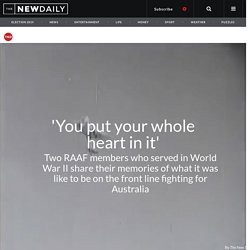 Now aged 95, he was 18 when he signed up to the RAAF. “I thought it would be wonderful to fly an airplane, irrespective of war,” he said. “It was very exciting. It was. It’s a big thing in your life to get up there and you’re all on your own. “And that’s what you do. (37) Before and After: Easter in Peacetime and Wartime (1941) Dutch queen planned deal with Nazis to help rescue Belgian king. Inside the hidden wartime bunkers built to protect Australians from attack. Updated 10 minutes agoTue 1 Jan 2019, 1:29am Historic bunkers which once offered protection during World War II now need protection of their own. 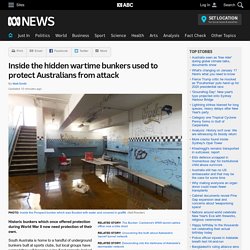 Key points: The bunkers were built during World War IIThey were stationed by emergency services and volunteers who ran the switchboardsHistory groups are hoping to preserve the few that are left South Australia is home to a handful of underground bunkers built at sports clubs, but local groups have warned they will become ruins if not properly looked after. Remembering Pearl Harbor and America's entry into the theatre of war. December 7, 1941. 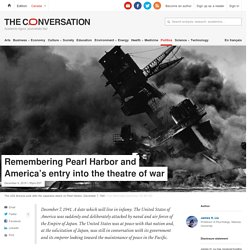 A date which will live in infamy. The United States of America was suddenly and deliberately attacked by naval and air forces of the Empire of Japan. The United States was at peace with that nation and, at the solicitation of Japan, was still in conversation with its government and its emperor looking toward the maintenance of peace in the Pacific. Thus began President Franklin Delano Roosevelt’s speech declaring war against Japan. Exhibition. Code Girls: The Untold Story of the Women Cryptographers Who Fought WWII at the Intersection of Language and Mathematics. 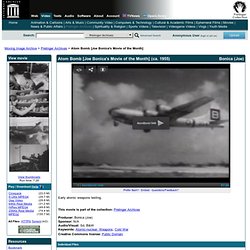 --'--> in-browser video player requires JavaScript to be enabled. It appears your browser does not have it turned on. Please see your browser settings for this feature. </div> Embedding Examples and Help Early atomic weapons testing. Touching Stories From Both Survivors and Saviors of German Concentration Camps - History Daily. Apr 152016 Throughout the winter and spring of 1945, as Allied forces recaptured German territories from both the east and the west, the Nazis’ horrifying secret began to unfold before their very eyes — millions of people had been imprisoned and killed in Nazi concentration camps. 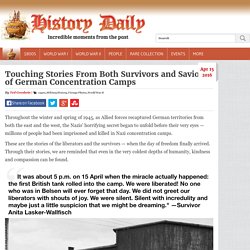 These are the stories of the liberators and the survivors — when the day of freedom finally arrived. Through their stories, we are reminded that even in the very coldest depths of humanity, kindness and compassion can be found. These Photos From Auschwitz Are the Only Surviving Visual Evidence of Victims' Last Moments. The Auschwitz Album, as it is referred to, is the only surviving visual account of the great atrocities that occurred at Auschwitz-Birkenau. 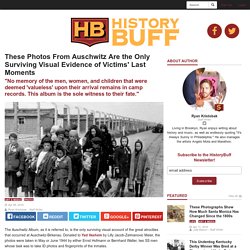 Donated to Yad Vashem by Lilly Jacob-Zelmanovic Meier, the photos were taken in May or June 1944 by either Ernst Hofmann or Bernhard Walter, two SS men whose task was to take ID photos and fingerprints of the inmates. These rebellious teens resisted the Nazis by beating up Hitler Youth, and some paid with their… On July 17, 1943, the Düsseldorf-Grafenberg branch of the Nazi party reported to the Gestapo on the growth of a new menace. Certain “youngsters,” party members warned, “aged between 12 and 17, hang around into the late evening, with musical instruments and young females. Since this riff-raff is to a large extent outside the Hitler Youth and adopts a hostile attitude toward the organization, they represent a danger to other young people.” Papua New Guinea Patrol Reports. Reports from government patrols are a major source of primary information on Papua New Guinea’s colonial-era history.

Patrol officers and other officials wrote detailed documents reporting on all aspects of the work carried out by the patrols. The reports give first-hand accounts on many topics, from first contact with remote Highland villages, to census counts, tax collection, health care, justice, labor recruiting, plantations, missionaries, anthropological descriptions, tribal warfare, languages, and more. Inside World War II Interactive. World War II History - World War II. In North Africa, British and American forces had defeated the Italians and Germans by 1943. An Allied invasion of Sicily and Italy followed, and Mussolini’s government fell in July 1943, though Allied fighting against the Germans in Italy would continue until 1945. After VE Day: The war without an end. THE WAR. Joseph Goebbels’ 105-year-old secretary: ‘No one believes me now, but I knew nothing’ ‘It was rare for us to see him in the mornings,” says Brunhilde Pomsel, her eyes closed and chin in her hand as she recalls her former boss.

“He’d walk up the steps from his little palace near the Brandenburg Gate, on to which his huge propaganda ministry was attached. He’d trip up the steps like a little duke, through his library into his beautiful office on Unter den Linden.” She smiles at the image, noting how elegant the furniture was, the carefree atmosphere where she sat in an ante-chamber off Joseph Goebbels’ office with five other secretaries, how his nails were always neatly manicured. Walt Disney's 1943 Propaganda Film Shows How Fascists Are Made. During World War II, Walt Disney entered into a contract with the US government to develop 32 animated shorts. Nearly bankrupted by Fantasia (1940), Disney needed to refill its coffers, and making American propaganda films didn’t seem like a bad way to do it.

Holocaust Movies for Middle School and High School. Ghosts of Time: 39 Incredible Then & Now WWII Pictures. This haunting collection of images takes us on a journey across the years, combining historical photographs with their modern-day settings. World War 2. 1941 Battle: 360° Reenactment. Life In A Destroyed City: Watch the Citizens Of Berlin in July 1945. What would you have done?: Terrible choices people had to make during WW2. How could Japanese airmen “volunteer” to become Kamikaze pilots? The Second World War in Colour – in pictures. 42 maps that explain World War II.