Motorized Star Wars AT-AT by LtDan. This is a walking model of an AT-AT from the Star Wars films. 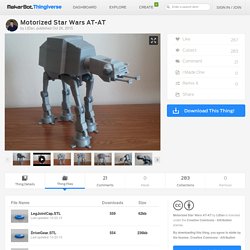 It is powered by a 9V battery, a 90 rpm motor, and a switch. Everything else is 3d printed using roughly 750 grams of filament. Here is a short video of it walking The entire design includes of 69 individual parts (28 STL files). It sounds like a ton but most of them are small easy prints. I printed a complete set of parts in about four days. The non 3d printed components can be purchased here:Motor - $13Switch - $0.759V Battery Clip - $1.25 (I used a battery clip I had laying around so you may need to cut and solder the wires) You will also need some super glue. It has taken a considerable amount of effort to design and build this and I have no problem with sharing these files for free, but if you feel like donating a small amount I would appreciate it greatly.

As always, if you have any questions feel free to send me a message. Rafts: No Supports: Yes Infill: I used 10% for everything Notes: Printer Requirements: Mos Eisley Spaceport. Batman vs Darth Vader - The United States of Nerd. Han Solo’s reputation as a daring, bold, and sometimes reckless pilot was further confirmed in The Empire Strikes Back when he took his beloved Millennium Falcon into an asteroid field. 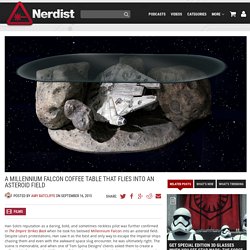 Despite Leia’s protestations, Han saw it as the best and only way to escape the Imperial ships chasing them and even with the awkward space slug encounter, he was ultimately right. The scene is memorable, and when one of Tom Spina Designs’ clients asked them to create a coffee table featuring the Millennium Falcon, the company decided to capture the asteroid chase scene. You’re not going to find a Star Wars coffee table like this at Pottery Barn (if Pottery Barn even sells coffee tables): One of Tom Spina Designs’ artists, Richard Riley, took a Hasbro model of the Millennium Falcon and a TIE Fighter model kit and applied paint to make them match the screen. He fit those models into a field of thankfully stationary asteroids. 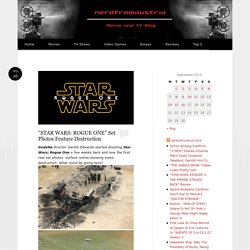 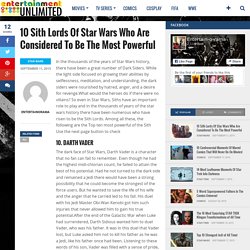 While the light side focused on growing their abilities by selflessness, meditation, and understanding, the dark siders were nourished by hatred, anger, and a desire for revenge.What would the heroes do if there were no villains? So even in Star Wars, Siths have an important role to play and in the thousands of years of the star wars history there have been numerous who have risen to be the Sith Lords. Among all these, the following are the Top ten most powerful of the Sith Use the next page button to check 10. The dark face of Star Wars, Darth Vader is a character that no fan can fail to remember. 9. Star Wars The Force Awakens - Rise of the First Order (Track 7) by A.Essam. Epicstream. We recently put up a list of Top 36 Star Wars: The Force Awakens toys from Force Friday, and the Hot Toys line of 1/6th scale action figures made it at #4. 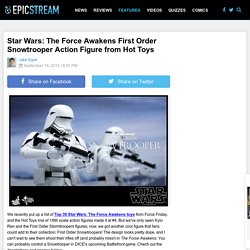 But we've only seen Kylo Ren and the First Order Stormtroopers figures; now, we got another cool figure that fans could add to their collection: First Order Snowtroopers! The design looks pretty dope, and I can't wait to see them shoot their rifles off (and probably miss!) In The Force Awakens. You can probably control a Snowtrooper in DICE's upcoming Battlefront game. Star Wars & Droid Addicts.