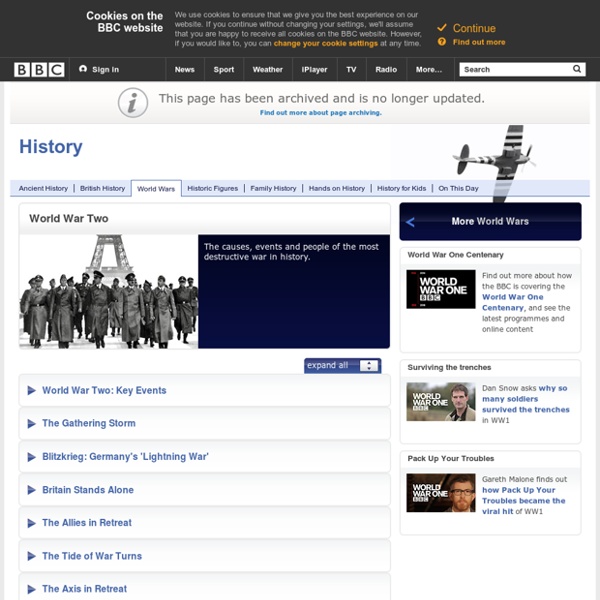 Did the Blitz really unify Britain? The defiance of Britain as it endured eight months of German bombing 70 years ago is etched on the collective memory and immortalised in the phrase "Blitz spirit". But does this image of national unity tell the whole story? Even for those lucky enough not to have been there, the sound of the sirens is enough to evoke those nights of 1940 when British cities were under constant attack. Lesson Plans: Dr. Seuss Dr. Seuss & WWII: Analyzing Political Cartoons Dr. Seuss is the beloved author of more than 50 children’s books.

World War 2 World War 2, also known as the Second World War, was a war fought from 1939 to 1945 in Europe and, during much of the 1930s and 1940s, in Asia. The war in Europe began in earnest on September 1, 1939 with the invasion of Poland by Nazi Germany, and concluded on September 2, 1945, with the official surrender of the last Axis nation, Japan. However, in Asia the war began earlier with Japanese interventions in China, and in Europe, the war ended earlier with the unconditional surrender of Germany on May 8, 1945. The first raid on London by the Luftwaffe Not since the end of the First World War had London experienced such terror from above. In that war, German Zeppelin raiders had approached in the darkness of the night, waiting in the shadows, ready to rain chaos on the towns and citizens below. The final attack didn’t come until the 5th August, 1918 (the commander of the German Naval Airship Department was killed in this last raid), and by then the Zeppelin airships had made 48 raids and killed 556 British citizens, while their aeroplanes had made 59 raids and killed 857. From the outset of World War Two, Britain had been expecting a great German air assault on its soil. It was this fear that drove mothers to evacuate their children from the big cities, and that led the government to enforce a blackout, issue gas masks, and distribute Anderson shelters. While plans for ‘Operation Sea Lion’ – the invasion of Britain – and the preliminary air battle were taking shape, the Luftwaffe was not of course idle.

Anne Frank and her family were also denied entry as refugees to the U.S. Portrait of Anne Frank at age 12, sitting at her desk at the Montessori school in Amsterdam. (Courtesy Anne Frank House, Amsterdam) Many have noted the historical parallels between the current debate over Syrians seeking refuge in the United States and the plight of European Jews fleeing German-occupied territories on the eve of World War II. Among the many who tried — and failed — to escape Nazi persecution: Otto Frank and his family, which included wife, Edith, and his daughters, Margot and Anne. And while the story of the family's desperate attempts ending in futility may seem remarkable today, it's emblematic of what a number of other Jews fleeing German-occupied territories experienced, American University history professor Richard Breitman wrote in 2007 upon the discovery of documents chronicling the Franks' struggle to get U.S. visas. world

World War II : Documents World War II : Documents Agreement Between the Governments of the United Kingdom, the United States of America, and the Union of Soviet Socialist Republics, and the Provisional Government of the French Republic on Certain Additional Requirements to be Imposed on Germany; September 20, 1945 Agreement Between the United Kingdom and the Union of Soviet Socialist Republics : July 12, 1941 Agreement for the Provisional Administration of Venezia Giulia; June 9, 1945 Agreement Relating to Prisoners of War and Civilians Liberated by Forces Operating Under Soviet Command and Forces Operating Under United States of America Command; February 11, 1945