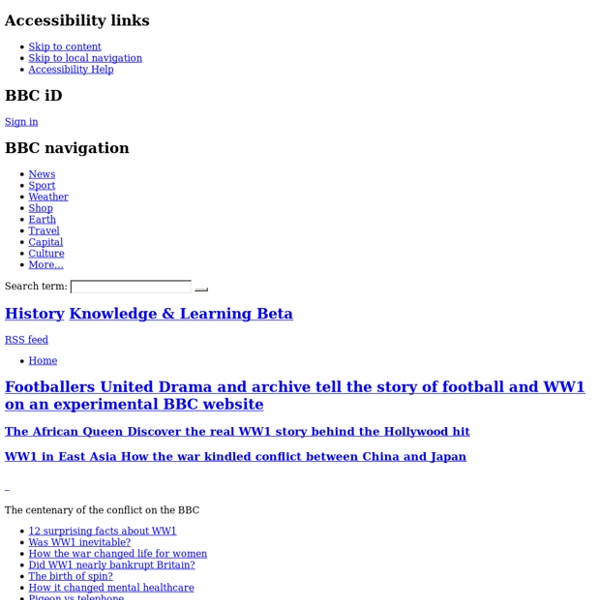 Life for tenant farmers on monastery land Explore the glory days of British motorbikes How can the 1883 disaster help in planning for the next one? What made that year so significant? Dan Snow uses the latest technology to track down lost landmarks A window into Britain's social and cultural history Watch interviews with iconic figures of the 20th century A history of Italy, from 1494 to the end of WWI Catch programmes that have already broadcast All history programmes coming up on TV and radio How the BBC will mark the anniversary of the conflict

50 Kick-Ass Websites You Need to Know About It's time to update the entries in your browser's links toolbar. But with recent estimates putting the size of the internet at well more than 100 million distinct websites, it's getting harder and harder to get a handle on all the great stuff that's out there. That's why we've compiled this list. Operation CLICK The Operation CLICK resource book is provided here in PDF file format in 11 separate downloadable files. Files require the Adobe Reader or other PDF reader to view. Get the free Adobe Reader (link opens in a new window)

The Spanish Armada Publication date: 9th December 2010 by Jon Nichol Spanish Armada Beacon This is a highly interactive and stimulating simulation for years 3 and 4, and a very effective way of involving children in a range of issues. What an Effective Teacher's Classroom Looks Like Another school year is approaching and many novice teachers are preparing to enter their own classrooms for the first time. To help them on their way, MiddleWeb is publishing a series of brief articles offering good advice and food for thought. What We See in Effective and Ineffective Classrooms by Annette Breaux and Todd Whitaker

Lebensraum: Policy or Rhetoric? When the Germans talked of Lebensraum, or ‘living space’, they used the term to denote a perceived need to have enough physical room to provide for themselves comfortably. In particular, it identified the possession of enough land to feed a population large enough to ensure Germany a place on the world stage. Hitler did not just start talking about the need to conquer Lebensraum in 1941; its origins lay much further back than even 1939. Anti-Nazi newspaper columnists (for example in Der Deutsche in Polen) observed during the late 1930s that Hitler’s foreign policy involved something more than just planless initiatives, improvisation and contradictory imperatives.

Tollund Man By Susan K. Lewis Posted 02.07.06 NOVA He has become the face of Iron Age Europe. But in 1950, when men cutting peat near the village of Tollund, Denmark, stumbled upon him, they thought he was a modern murder victim. The police, aware of similar ancient bodies, contacted the Silkeborg Museum, and various specialists—archeologists, forensic scientists, radiologists, paleobotanists, even dentists—later studied his body. Here, learn about their findings and get an intimate view of the 2,400-year-old man.

What Makes a Parent Love a Teacher Guest post by Jennifer Gonzalez The note from Mrs. F. came home two weeks into the school year:I’d like to talk with you about how we can make reading time more challenging for Ruby. When can we meet? Although I knew my daughter was an advanced reader, I had accepted that it would always be up to me to ask for this kind of differentiation. The conversation had never been initiated by the teacher.

Who were the Black Diggers? Nearly 4,000 Indigenous people officially served during World War II (1939-1945), according to historian Robert Hall. Of those, about 3,000 were Aboriginal people and 850 Torres Strait Islander people. Other accounts suggest as many as 5,000 Indigenous people served. The War Service Land Settlement Agreement between the Federal Government and states resulted in soldier settlement legislation that granted returned service personnel land. While Indigenous service personnel were not excluded, many say they were rejected from the scheme.