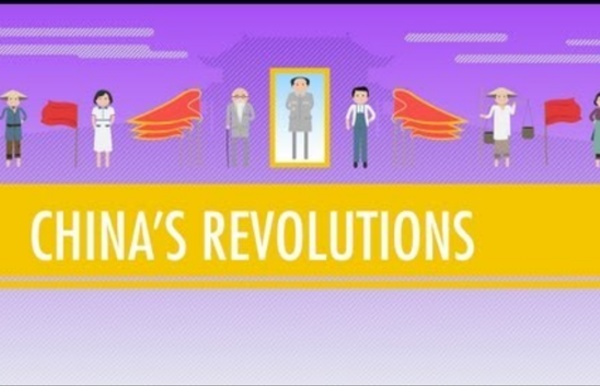 Big data meets Big Brother as China moves to rate its citizens On June 14, 2014, the State Council of China published an ominous-sounding document called "Planning Outline for the Construction of a Social Credit System". In the way of Chinese policy documents, it was a lengthy and rather dry affair, but it contained a radical idea. What if there was a national trust score that rated the kind of citizen you were? Imagine a world where many of your daily activities were constantly monitored and evaluated: what you buy at the shops and online; where you are at any given time; who your friends are and how you interact with them; how many hours you spend watching content or playing video games; and what bills and taxes you pay (or not). It's not hard to picture, because most of that already happens, thanks to all those data-collecting behemoths like Google, Facebook and Instagram or health-tracking apps such as Fitbit.

Cultural Revolution Zhou acted to stabilize China by reviving educational system and restoring numerous former officials to power. In 1972, however, Mao suffered a stroke; in the same year, Zhou learned he had cancer. The two leaders threw their support to Deng Xiaoping (who had been purged during the first phase of the Cultural Revolution), a development opposed by the more radical Jiang and her allies, who became known as the Gang of Four. In the next several years, Chinese politics teetered between the two sides. The radicals finally convinced Mao to purge Deng in April 1976, a few months after Zhou’s death, but after Mao died that September, a civil, police and military coalition pushed the Gang of Four out.

Did the CIA test LSD in the New York City subway system? On Nov. 28, 1953, Frank Olson, a bland, seemingly innocuous 42-year-old government scientist, plunged to his death from room 1018A in New York’s Statler Hotel, landing on a Seventh Avenue sidewalk just opposite Penn Station. Olson’s ignominious end was written off as an unremarkable suicide of a depressed government bureaucrat who came to New York City seeking psychiatric treatment, so it attracted scant attention at the time. But 22 years later, the Rockefeller Commission report was released, detailing a litany of domestic abuses committed by the CIA. The ugly truth emerged: Olson’s death was the result of his having been surreptitiously dosed with LSD days earlier by his colleagues.

Cultural Revolution The failure of the Great Leap Forward (1958-62) weakened Mao's position considerably in the Communist Party as factions began to form against him.  His sense that the party was shunting him aside probably lies behind his call for a Great Revolution to Create a Proletarian Culture, or Cultural Revolution for short. But Mao also genuinely feared that China was slipping in an inegalitarian direction and he would not stand by while a new elite took over the party and subverted the revolution. To Mao the revolution had to be a permanent process, constantly kept alive through unending class struggle. Hidden enemies in the party and intellectual circles had to be identified and removed.

Family tree of the Greek gods Greek cosmological entities Essential Olympians and Titans The essential Olympians' names are given in bold font. See also List of Greek mythological figures Notes Mao Zedong Mao Zedong was born in 1893 and he died in 1976. Mao Zedong is considered to be the father of Communist China and along side Sun Yat-sen and Chiang Kai-shek played a fundamental part in China's recent history. Mao Mao was born in Chaochan in Hunan province. He came from a peasant family. America's Flag Proportions 100% woven, spun Polyester, this is the most durable flag material ever created. With the look of cotton, this material was designed and engineered especially for industrial, commercial or institutional use or wherever severe climactic conditions exist. Brand Names: Tough-Tex, Koralex II, Champion, Polywavez, Poly-Max, PolyExtra.

Explicit cookie consent MOST lovers of Chinese martial arts take the magical aspects of kung fu, as demonstrated by the flying fighters of legend and film, with a pinch of salt. But Wei Lei built his career in China on a claim that his mastery of tai chi, a branch of kung fu, had given him supernatural power. In a programme about kung fu that was broadcast on state television in 2015, Mr Wei demonstrated that he could keep a dove standing on his hand with an invisible force-field and smash the inside of a watermelon without damaging its rind.

Mao's Great Leap Forward 'killed 45 million in four years' - News - Books Speaking at The Independent Woodstock Literary Festival, Frank Dikötter, a Hong Kong-based historian, said he found that during the time that Mao was enforcing the Great Leap Forward in 1958, in an effort to catch up with the economy of the Western world, he was responsible for overseeing "one of the worst catastrophes the world has ever known". Mr Dikötter, who has been studying Chinese rural history from 1958 to 1962, when the nation was facing a famine, compared the systematic torture, brutality, starvation and killing of Chinese peasants to the Second World War in its magnitude. At least 45 million people were worked, starved or beaten to death in China over these four years; the worldwide death toll of the Second World War was 55 million. Mr Dikötter is the only author to have delved into the Chinese archives since they were reopened four years ago.

S. Korea Prepares to Evacuate DMZ Citizens After Threat South Korea is preparing to evacuate more than 800 residents along the demilitarized zone after North Korea threatened to fire on activists planning to send balloons across the border carrying leaflets critical of its regime. While no orders to leave are currently in place, authorities have been preparing citizens residing within the civilian control line to evacuate if any signs of a possible attack emerge, Park Kwang Hae, an official at Paju City Council, said by telephone today. The threat of an attack against activists is the first since North Korean leader Kim Jong Un succeeded his father Kim Jong Il in December. South Korea has not sighted any unusual troop movements north of the border today, said a Defense Ministry official, who could not be named due to military policy. The activists are pushing ahead with their plan to send 200,000 leaflets at 11 a.m. today, according to Park Sang Hak, leader of the Fighters for Free North Korea, one of the organizers.