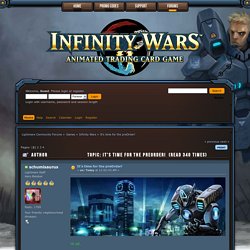 [ha, ha] PREORDER WILL LAUNCH ON NOVEMBER 21st, 12AM IWT ORDER WILL LAUNCH ON DECEMBER 12th, 12AM IWT The hype train is pulling into the station, woo woo! Important Notes: Order cards will NOT be tournament legal until December 19th, 12AM IWT. Ranked will be reset with the release of Order. Similar to the Ascension preorder, the bonuses are split into two categories.

Yes, all preorders get platinum borders, including the alternate arts [Shiny!] Purchasing is available with IP or LP, although not both at the same time [You can’t buy a 25 pack with half LP and half IP]. To combine packs [eg 2x 25 packs into a 50 pack, please email marketing@lightmare.com.au to have the packs combined. Purchasing Bonuses:- Purchasing is not cumulative [for instance buying two 25 packs does not equal a 50 pack]. - All purchasing bonuses are not soulbound. - The alternate cardbacks are all different, no double ups in the rewards. On November 21st.... Tournament! Starting Date: Oct. 18th, 2014. Hi everyone! 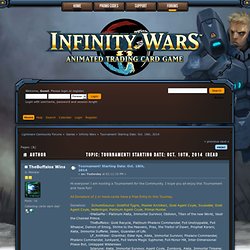 I am hosting a Tournament for the Community. I hope you all enjoy this Tournament and have fun! All Donators of 2 or more cards have a Free Entry to this Tourney. Donators: SchumiSaurus: GoldFoil Tygris, Master Architect, Gold Agent Coyle, Soulseller, Gold Agent Coyle, Hellbringer, Platinum Agent Coyle, Primal Hunter. -tHeGaMe-: Platinum Aleta, Immortal Survivor, Oblivion, Titan of the new World, Vasir the Chained Prince. {SSC}SoulSobriety Community. Tournaments for Infinity Wars: Animated Trading Card Game First of all I can not say how excited I am typing this thread out for what we are going to be doing in tournaments. 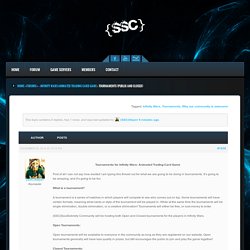 It’s going to be amazing, and it’s going to be fun. What is a tournament? A tournament is a series of matches in which players will compete to see who comes out on top. Some tournaments will have certain formats, meaning what cards or style of the tournament will be played in. Infinity Wars Comprehensive Rules Guide. Aleta's Archive - Infinity Wars Card Search. Articles - Infinite Network. Anyone who frequents the official Infinity Wars forums has probably noticed the abundance of animated artwork in people's signatures recently. 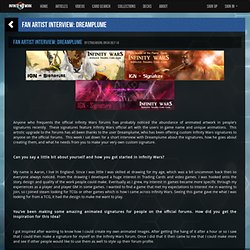 These signatures feature Infinity Wars official art with the users in game name and unique animations. This artistic upgrade to the forums has all been thanks to the user Dreamplume, who has been offering custom Infinity Wars signatures to anyone on the official forums. This week I sat down for a short interview with Dreamplume about the signatures, how he goes about creating them, and what he needs from you to make your very own custom signature. Can you say a little bit about yourself and how you got started in Infinity Wars? My name is Aaron, I live in England. You've been making some amazing animated signatures for people on the official forums. Winsanity's Massive Post of Decklists I Use. Prepare for the wall of text known as me posting a bunch of decks. 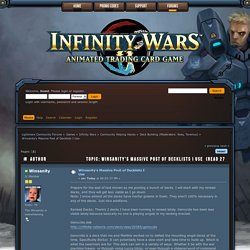 I will start with my ranked decks, and they will get less viable as I go down.Note: I know almost all the decks have martyr golems in them. They aren't 100% necessary in any of the decks. Just nice additions. Infinity Wars partners with Fabrika Online. Hello Infinity Warriors, Today we have an exciting announcement and we're eager to go over what this means for Infinity Wars. 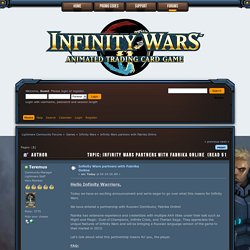 We have entered a partnership with Russian Distributor, Fabrika Online! Fabrika has extensive experience and credentials with multiple AAA titles under their belt such as Might and Magic: Duel of Champions, Infinite Crisis, and Therian Saga. They appreciate the unique features of Infinity Wars and will be bringing a Russian language version of the game to their market in 2015. Let's talk about what this partnership means for you, the player. If I already have an account, and am a Russian player, what will happen? A History of Ranked - Infinite Network. A history of ranked and the evolution of the meta. 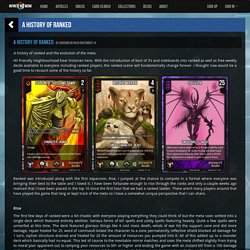 Hi! Friendly neighbourhood bear historian here. With the introduction of best of 3's and sideboards into ranked as well as free weekly decks available to everyone including ranked players, the ranked scene will fundamentally change forever. Today's Meta, Deck Archetypes, and Factions - Infinite Network. Anyone who has spent enough time playing card games will have heard the term meta or metagame thrown around. 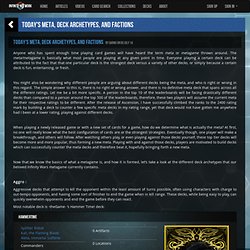 The meta/metagame is basically what most people are playing at any given point in time. Everyone playing a certain deck can be attributed to the fact that that one particular deck is the strongest deck versus a variety of other decks, or simply because a certain deck is fun, entertaining, or fresh. You might also be wondering why different people are arguing about different decks being the meta, and who is right or wrong in this regard. The simple answer to this is, there is no right or wrong answer, and there is no definitive meta deck that spans across all the different ratings. Let me be a bit more specific. Reddit Asks: Infinity Wars. dTCG Sanctum. With the sudden influx of players from Steam into Infinity Wars, I find myself having the same discussion I had a million times when Hex: Shards of Fate was announced. 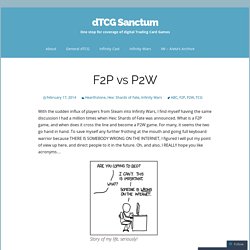 What is a F2P game, and when does it cross the line and become a P2W game. For many, it seems the two go hand in hand. To save myself any further frothing at the mouth and going full keyboard warrior because THERE IS SOMEBODY WRONG ON THE INTERNET, I figured I will put my point of view up here, and direct people to it in the future. Oh, and also, I REALLY hope you like acronyms… 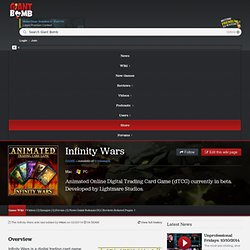 The game introduces unique mechanics to evolve trading card games to the next level, while keeping itself familiar enough to veterans of the genre. While many TCGs are considered 'pay to win', Lightmare Studios has taken steps to ensure that every player can start up with ease. They did it using an in-game currency that allows players to purchase any and all cards (slowly - but surely), and by adding game modes that are designed for newcomers. In addition, trading is an option, and the current community is very welcoming and holds plenty of giveaways and the likes to help newer players. Infinity Wars (InfinityWarsTCG) on Twitter. Infinity Wars - Animated Trading Card Game. Infinity Wars. Infinity Wars on twitch.tv. Infinity Wars Shoutcast: Gravecrawler vs Mynci. Infinity Wars Original Soundtrack by AudioDriver. Reporting a Bug/Account Help. Hello Infinity Warriors, Due to the current process of bug reporting, the forum for Bug Reports has been removed and all reports consolidated into our system.

Moving forward we need everyone to be reporting any bug they experience in the proper manner by following the instructions in this post. It is extremely important that, even if a bug is known, that it is still reported. The more reports of anything we get, the higher priority it gets. Please help us by helping us to help you....help yourselves....with help....and cheese. Reporting a bug via the help menu will not warrant a response from us. To report a glitch, a bug, or some odd occurrence when using the Steam Client please follow the below instructions: Right click IW in your library on steam, hit properties - local files - browse local files - open Infinity Wars_TCG Data Make a copy of Output_Log.txt and attach it in the bug report form of the help menu at the top of your game.

This is intended as a reference document for players interested in the lore of Infinity Wars. Sections are intended to be standalone, so you don't have to read it start to finish and can freely jump around. Have fun! The Calamity was a great magical disaster which occurred many millennia ago. The Old World The Old World is home to the Warpath and (except for the Old World’s Aleta) devoid of all human life. Lore: The Calamity. Card Analysis: Agent Coyle, Zomborg. Card Analysis: Verore Magic Siphoners. Hitori's Guide For the New Trader! Hello ladies(?) And gentlemen. I've decided that it is time this game had some general trading guidelines for newcomers, hopefully this will help any and all newbies - and perhaps even some veterans - make the most out of their current collection.

First, however, I'll add a short introduction to this guide. Some of you may be asking yourselves 'why should I trust THIS guy to make up the values for MY cards? ' - the answer is, you shouldn't. The less serious, and perhaps more offensive, answer is - because I was born into a Jewish family. Tier list of Legendary and Epic Cards. Here's a list of rares+ cards with relative trade value. Each rarity is divided into 3 tiers. You can usually assume that a trade between the same tier is fair. Credit: thx to Symphony for the nice colors and linked images ! IW Trading Guide. Section B - Trading Guidelines: In this section I'll give you some general guidelines to help make trading easier, but keep in mind (again) that these are guidelines I use personally, they are not absolute by any means and should not be considered as such.

I would also like to mention that depending on who you're trading with (at least now, with the relatively small community), you may wish to forsake these completely - I often find myself trading with new players and simply give them a few extra cards more than the worth of their offer because they need them and it will barely scratch the surface of my card pool. So, without further ado, to the guidelines - Beginner's Guide to Infinity Wars.

That was pre-infestation so here I wanted to go over what’s changed in infestation and what are some more specific new combos to look out for when drafting. First a couple of basic things about factions… A lot of people in global chat will have you believe that Verore is the best faction and best draft faction. They are actually third best in terms of drafting. Super Coyle Burial Dragon Explosion - Infinite Network. Super Coyle Burial Dragon Explosion 2 Artifacts. Draft Deck Analysis: 2 GI / 1 FD (video 1 out of 4) Infinity Wars: OP Deck Building Strategy: Sleepers. [Important] Design Review, and Rotation Concepts. This is likely going to be one of the most controversial posts I'll have ever made in the history of these forums. I ask that every single user who has their eyes on this thread, please ensure you read what you're about to see VERY CAREFULLY because I'm sure there will be a very wide variety of reactions to this post and we need to keep it civil at the very least.

Thank you for your cooperation. Recently, Lightmare's team got together and put themselves through a Design Review. We went over what we started with back in Alpha, what we've done over the course of development, and where we're at now. Infinity Wars 2014: Animated Trading Card Game on Steam.