Gallipoli and the Anzacs 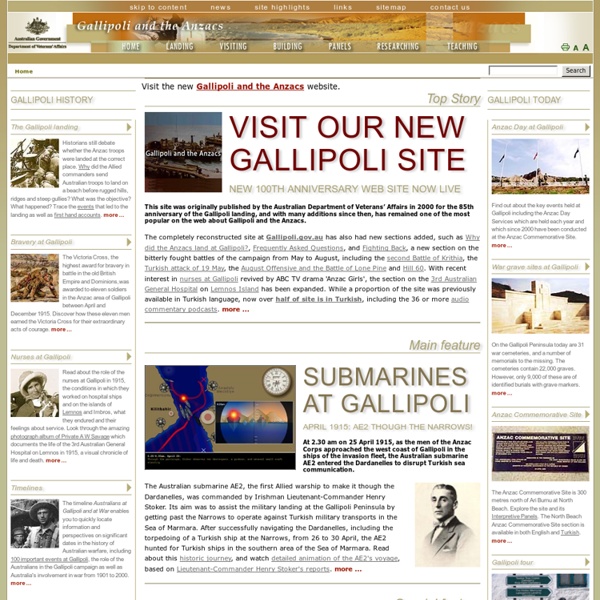 World War I 1914-1919: A Source-based Study Syllabus | Exams | Websites | Resources | Glossary | Teachers Modern History Home > Modern History > Core Study > World War I 1914-1919: A Source-based Study Key historical features | Concepts | Historiographical issues | Framework Key historical features Concepts World War I: glossary Historiographical issues Framework World War I: framework | Copyright | Disclaimer | Contact Us | Help AE2 enters the Dardanelles, 1915 - History (9) - ABC Splash - Overview This media resource contains content that shows images of war. World War I was fought on land, in the air, on the sea and below it. What role did AE2, an Australian submarine, play in the campaign to take Turkey's Gallipoli Peninsula in 1915? In this vivid re-enactment you will journey into the hazards of the Dardanelles Strait with the crew of AE2 as it commences what many believed would be a suicide mission. Duration: 2 mins 45 secs Source : Gallipoli Submarine Learning area: History Secondary: Year 9 Before viewing What do you already know about submarine warfare? As you view What were the tasks of AE2 when it journeyed into the Dardanelles Strait? According to Commander Stoker's record of the voyage, what hazards did AE2 face? What happened when previous allied submarines entered the Dardanelles? What hints does this re-enactment provide about what it was like to be part of AE2's crew? What evidence do you think the re-enactment was based upon? After viewing Next steps Transcript

The Mounted Soldiers of Australia — Australian Light Horse Association Horses have played a special role in the story of Australia. For the first hundred years of European settlement they were the only means of transport across most of our huge country. Outside the few cities, ability to ride a horse was almost as basic as the ability to walk. The value of the mounted soldier in Australia was first shown in 1804 when redcoats of the New South Wales Corps set out in pursuit of a large force of rebel convicts who had broken out of the Castle Hill Prison Farm. Riding with the commanding officer of the Corps was a trooper called Thomas Anelzark, a member of Governor King's mounted convict bodyguard. After this, men of the "bodyguard", already described as "lighthorsemen", played an increasingly important role and were fore-runners of a semi-military mounted police force.. Some of the British infantry regiments stationed in Australia found the need to create special mounted units. At first Britain was wary of using untried, unprofessional colonial cavalrymen.

untold stories & official histories of WW1 iTunes U course and Multi-Touch Book on the First World War! Whether you’re a school student or a WW1 enthusiast, you can now discover the different causes leading to the First World War with our new iTunes U course and Multi-Touch Book. The book and related course, available on iTunes in both Dutch and English, use fascinating historical materials to bring the months and years before the outbreak of war into focus. Many of these sources are drawn from Europeana 1914-1918, our dedicated WW1 site which brings together hundreds of thousands of items related to the war from heritage institutions and members of the public across Europe. From postcards and political cartoons, to maps and propaganda, the story of the crisis is told from a whole range of voices and perspectives. There are also plenty of interactive assignments you can complete to help you come to your own conclusions about how the war began. We hope you enjoy Europeana’s first Multi-Touch Book and iTunes U course. Download the English Multi-Touch book and iTunes U course itunes ww1

WW1 Research and Sources of Information The Great War of 1914-1918 is a vast subject. Listed here are links to our pages or direct links to other websites covering some of the more specialist areas of World War 1 archives and resources for research. You will find information on a variety of resource material for research on this subject including archives and libraries, military records, maps, museums, schools resources and what records are available to help you trace WW1 family history. Information on this page features: Academic Study Educational establishments committed to the study of the First World War can be found on our page of organizations at: Organizations for WW1 Academic Study Archives, Military Records and Publications Archives and records dating back to the 1914-1918 war are held for individuals and military units in a variety of museums and archive collections. Some public records listings are available to buy in book form or on CD Rom. Miltary Records for Tracing WW1 Family History Tracing WW1 Family History

WW1 Battlefields of the Western Front The long line of battlefields that makes up the Western Front runs through a wide variety of landscapes in south-west Belgium, north-eastern and eastern France. The battle lines wind their way across the countryside from the sand dunes and flat, reclaimed sea level land on the Belgian coast in the north, to the mountain peaks at 1,400 metres (4,500 feet) above sea level in the Vosges mountain range at its southern end. From a geographical point of view the range of landscapes on which the Western Front battlefields were established include sand, clay, chalk and rock, rivers, canals, valleys and cliffs, ridges and mountains, plains, forests and swamps. When visiting the battlefields it can be seen how the geological make-up of the ground and the peculiarities of the landscape inevitably played a major part in influencing strategy, tactics, development of new weaponry and fighting techniques in the battles of the Western Front. Map of the 1914-1918 Western Front Battlefields Antwerp

Missed In History: The Gallipoli Campaign | Stuff You Missed in History Class Water carriers take a break from carting water to the front lines at Gallipoli during the heat of the summer months. Date unknown. (Photo by Philip Schuller/Fairfax Media via Getty Images) I’ve been watching a lot of “Miss Fisher’s Murder Mysteries” … and reading a lot of them, too. Two of the series’ recurring characters, Bert and Cec, fought together at Gallipoli in World War I. Based on context, it seemed as though they — and many of the other Australian and New Zealand Army Corps (ANZAC) — were particularly affected by a campaign that came across as particularly brutal and sometimes horrifying. Thanks to Oxford University Press for sending us a review copy of “Great Battles: Gallipoli” by Jenny Macleod, which was one of the sources for the show today. Our listener mail is from Jeff, who writes about segregation in Nevada following our Harlem Hellfighters episode. Episode link: The Gallipoli Campaign My research: Australian War Memorial.