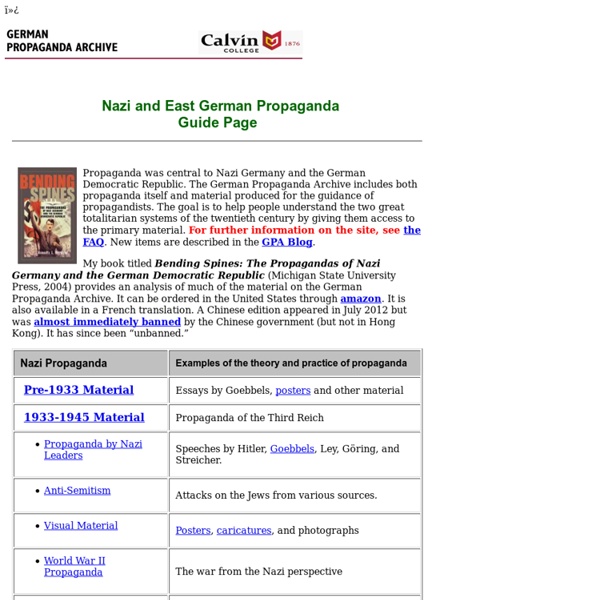 Nazi and East German Propaganda Guide Page Propaganda was central to Nazi Germany and the German Democratic Republic. The German Propaganda Archive includes both propaganda itself and material produced for the guidance of propagandists. The goal is to help people understand the two great totalitarian systems of the twentieth century by giving them access to the primary material. For further information on the site, see the FAQ. New items are described in the GPA Blog. My book titled Bending Spines: The Propagandas of Nazi Germany and the German Democratic Republic (Michigan State University Press, 2004) provides an analysis of much of the material on the German Propaganda Archive. This site is maintained by: Randall Bytwerk [My e-mail address is available on the FAQ page.] Professor Emeritus Calvin College Page design by Rob Veenstra

Nazism Nazism, or National Socialism in full (German: Nationalsozialismus), is the ideology and practice associated with the 20th-century German Nazi Party and state as well as other related far-right groups. Usually characterised as a form of fascism that incorporates scientific racism and antisemitism, Nazism originally developed from the influences of pan-Germanism, the Völkisch German nationalist movement and the anti-communist Freikorps paramilitary culture in post-First World War Germany, which many Germans felt had been left humiliated by the Treaty of Versailles. German Nazism subscribed to theories of racial hierarchy and social Darwinism, asserted the superiority of an Aryan master race, and criticised both capitalism and communism for being associated with Jewish materialism. The Nazi Party was founded as the pan-German nationalist and antisemitic German Workers' Party in January 1919. Etymology

Music Approved of by the Third Reich Under the Nazi regime, all music produced had to fit within certain standards defined as "good" German music. Suppression of specific artists and their works was common, yet musicians were permitted limited artistic freedom. The Nazis attempted to create a balance between censorship and creativity in music to appease the German people. This blend of art and politics led to a three-prong policy regarding musicians and artists: Loyal Nazi members who were talented musicians were guaranteed a job. Loyal Nazi members who were not talented musicians were not guaranteed a job. Any non-Jewish person who demonstrated a "genius" for music and was a member of the Reichsmusikkammer (Reich Music Chamber) was permitted employment.

Adolf Hitler Adolf Hitler (German: [ˈadɔlf ˈhɪtlɐ]; 20 April 1889 – 30 April 1945) was an Austrian-born German politician who was the leader of the Nazi Party (German: Nationalsozialistische Deutsche Arbeiterpartei (NSDAP); National Socialist German Workers Party). He was Chancellor of Germany from 1933 to 1945 and Führer (leader) of Nazi Germany from 1934 to 1945. As effective dictator of Nazi Germany, Hitler was at the centre of World War II in Europe, and the Holocaust. Hitler was a decorated veteran of World War I. He joined the precursor of the NSDAP, the German Workers' Party, in 1919 and became leader of the NSDAP in 1921. Lebensraum: Policy or Rhetoric? When the Germans talked of Lebensraum, or ‘living space’, they used the term to denote a perceived need to have enough physical room to provide for themselves comfortably. In particular, it identified the possession of enough land to feed a population large enough to ensure Germany a place on the world stage. Hitler did not just start talking about the need to conquer Lebensraum in 1941; its origins lay much further back than even 1939. Anti-Nazi newspaper columnists (for example in Der Deutsche in Polen) observed during the late 1930s that Hitler’s foreign policy involved something more than just planless initiatives, improvisation and contradictory imperatives.

Degenerate Art The years 1927-37 were critical for artists in Germany. In 1927, the National Socialist Society for German Culture was formed. The aim of this organization was to halt the "corruption of art" and inform the people about the relationship between race and art. Adolf Hitler Adolf Hitler was born on 20th April, 1889, in the small Austrian town of Braunau near the German border. Both Hitler's parents had come from poor peasant families. His father Alois Hitler, the illegitimate son of a housemaid, was an intelligent and ambitious man and was at the time of Hitler's birth, a senior customs official in Lower Austria. Alois had been married before. Who were the Black Diggers? Nearly 4,000 Indigenous people officially served during World War II (1939-1945), according to historian Robert Hall. Of those, about 3,000 were Aboriginal people and 850 Torres Strait Islander people. Other accounts suggest as many as 5,000 Indigenous people served. The War Service Land Settlement Agreement between the Federal Government and states resulted in soldier settlement legislation that granted returned service personnel land. While Indigenous service personnel were not excluded, many say they were rejected from the scheme.