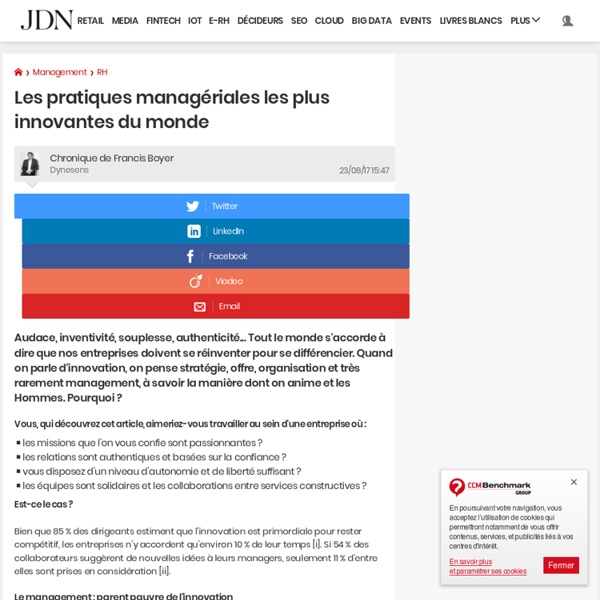 Cut the bullshit: organizations with no hierarchy don’t exist Do completely horizontal organizations truly exist? Fueled by growing excitement about self-management, bossless leadership and new governance models such as Holacracy, I increasingly hear large claims about the potential of “flat organizations”, which are being used as synonymous to “having no hierarchy”. I often wonder whether I am reading correctly: Organizations with no hierarchy at all, with real live people in them? I feel like there has been a misunderstanding here. I might be wrong, but from my 5 year experience of being a member of the distributed organization OuiShare, my conclusion is: there is no such thing. To explain why I’ve been quite frustrated with this misunderstanding, let me describe a scenario I have been confronted with multiple times in the past years: a new person, let’s call her Lisa, joins OuiShare to actively contribute to our network.

Inside Amazon: Wrestling Big Ideas in a Bruising Workplace Amazon may be singular but perhaps not quite as peculiar as it claims. It has just been quicker in responding to changes that the rest of the work world is now experiencing: data that allows individual performance to be measured continuously, come-and-go relationships between employers and employees, and global competition in which empires rise and fall overnight. Amazon is in the vanguard of where technology wants to take the modern office: more nimble and more productive, but harsher and less forgiving. “Organizations are turning up the dial, pushing their teams to do more for less money, either to keep up with the competition or just stay ahead of the executioner’s blade,” said Clay Parker Jones, a consultant who helps old-line businesses become more responsive to change.

Consensus Process - Noisebridge "We reject: kings, presidents, and voting. We believe in: rough consensus and running code." -- Dave Clark, IETF Proceedings, July 1992 [edit] What is Consensus Consensus is a non-violent way for people to relate to each other as a group. Successful use of a consensus process depends on people understanding the idea and wanting to use it. You probably don't want to work for Amazon Amazon is known for its cutthroat efficiency and harsh tactics; it's what makes it possible to get a pack of toilet paper delivered to your door in less than 24 hours. But CEO Jeff Bezos' love of precision and data goes far beyond fulfilling orders and undercutting competitors' prices. It permeates every aspect of the workplace. And ruthless optimization, unsurprisingly, doesn't make for a very supportive workplace environment. The New York Times' Jodi Kantor and David Streitfeld interviewed over 100 former and current Amazon employees for a fantastic new report out today that reveals just how bad it can get. Working at the retail giant's Seattle offices is apparently nothing like showing up to work at an idyllic Silicon Valley campus.

A business within the business — The Connected Company A lot of problems in business could be solved if we could align the interests of employees and managers with owners. Is there a way to get everyone to act like owners? The answer is yes – but not without changing the structure of your company in ways that might make you a bit uncomfortable. 7 'digital nomads' explain how they live, work and travel Feel miserable working in a cubicle or living in a boring town? The Internet has revolutionized the term ‘work’ today, bringing new opportunities and employment that didn’t exist until recently. For many, the Internet is an opportunity to combine work and traveling the world. The term ‘digital nomad’ is frequently overused and often simply means hacking around in cheap accommodation with a small level of income to keep you going. But, there are some folks out there who have shown that you can combine a career with the freedom to travel on your own schedule.

How Holacracy Works - WonderWorks Consulting Let Us Explain How Holacracy Works? We’ve put Holacracy® to the test in a wide array of organizations and industries: from big corporations to family-run businesses to our own team and households. We know it inside and out: its power and what it takes to maximize its success. We know the common resistances and pitfalls that arise when implementing Holacracy. That’s why we include masterful coaching and facilitation to align each individual with the essential purpose of your organization — moving you towards your result. Why Sweden Is Shifting To A 6-Hour Workday The eight-hour workday hasn't changed much since Henry Ford first experimented with it for factory workers. Now, Americans work slightly longer—an average 8.7 hours—though more time goes into email, meetings, and Facebook than whatever our official job duties actually are. Is it time to rethink how many hours we spend at the office? In Sweden, the six-hour workday is becoming common. "I think the eight-hour workday is not as effective as one would think," says Linus Feldt, CEO of Stockholm-based app developer Filimundus.

Structuring a New Collaborative Culture When I was a junior designer, my creative director asked me to design a mascot with the rather uninspiring instruction to reorder the shapes of the famous 2012 Olympics logo. Having little choice but to accept my task, I threw myself into it with all the boundless, panicked energy that comes from needing to impress the powers above, trusting my superior to steer me in the right direction. Three weeks later I was distraught, the entire weight of our complete and utter failure to win the pitch resting on my shoulders. It would be easy to put that loss down to inexperience—after all, I totally missed the brief, and every other pitch was better. Why people under 35 are so unhappy Say hi to Lucy. Lucy is part of Generation Y, the generation born between the late 1970s and the mid 1990s. She’s also part of a yuppie culture that makes up a large portion of Gen Y.

An Alternative To Holacracy: Unlocking Ideas For The Best Results The jury is still out on whether the “no managers, self-governing” management trend called holacracy is here to stay. Recent news that online retailer Zappos is shifting to a holacratic model drew a fair bit of attention, at least among the chattering class. The notion that an organization can run better by flattening management and ditching job titles is a welcome idea to some and a radical notion to many others. Two important pivots are at the core of a holacratic organization, according to leadership experts: 1.

10 Songs That Make The Ultimate Change Management Playlist - Change! - Change Management News & Tips Music can be the backbone of inspiration for many. Whether you use music to de-stress or its just a way to distract yourself on your travels to work, I think these 10 songs might just be able to help make your day a little better. Change management is an important aspect in the business world, and implementing change can be a complicated process to which we constantly look for simple solutions. This post may not recommend any tools or methods (for that you have pretty much any other post on our blog,) but it sure can help make your day a little better, and even give you some advice on how to become a better leader when implementing and managing change. We all know that record labels only produce what sells, so these artists must know what they are talking about…

Zappos just abolished bosses. Inside tech's latest management craze. The latest management trend to sweep Silicon Valley requires CEOs to formally relinquish their authority and grants special protection for every employee to experiment with ideas. It's called holacracy and big name tech leaders have jumped on the bandwagon. Twitter co-founder Evan Williams adopted it for his new blogging platform startup, Medium. The management movement started making headlines when Zappos CEO Tony Hsieh announced that he will transition his entire Las Vegas company — with a billion dollars of revenue and 1500 workers — to holacracy by the end of 2014. Holacracy advocates argue that centralization of power suffocates innovation Can this unconventional management scheme actually work?

www.wsj After working at Theranos Inc. for eight months, Tyler Shultz decided he had seen enough. On April 11, 2014, he emailed company founder Elizabeth Holmes to complain that Theranos had doctored research and ignored failed quality-control checks. The reply was withering. Ms. Holmes forwarded the email to Theranos President Sunny Balwani, who belittled Mr.