We Invoked Uphill! Both Ways…. You kids today, getting excited at the latest deluxe edition grimoire bound in goat skin with talismanic slipcase. 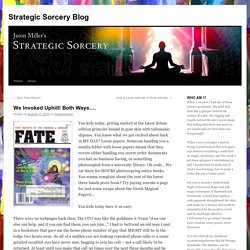 You know what we got excited about back in MY DAY? Loose papers. Someone handing you a manila folder with loose papers meant that they werew either handing you secret order documents you had no business having, or something photocopied from a university library. Oh yeah… We sat there for HOURS photocopying entire books.

You wanna complain about the cost of the latest three hands press book? You kids today have it so easy. Dionysian Atavism: PGM IV. 2967-3006. The Queen's jubilee should be a time of rejoicing for our spoilsports. Last week, I was shocked by an article in the Guardian that was incredibly down on the jubilee. 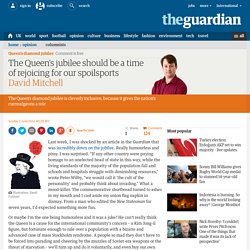 Really humourless and pissy. I was surprised. "If any other country were paying homage to an unelected head of state in this way, while the living standards of the majority of the population fall and schools and hospitals struggle with diminishing resources," wrote Peter Wilby, "we would call it 'the cult of the personality' and probably think about invading. " What a mood-killer. The commemorative shortbread turned to ashes in my mouth and I cast aside my union flag napkin in dismay.

About Vinay Gupta. Head over to Re.silience.com. 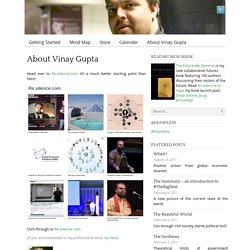 It’s a much better starting point than here! Click through to Re.silience.com. (if you are interested in my professional work, try here) I am trying to keep you alive. There are lots of threats which governments are either ignoring or causing. Nuclear war, bioweapons, even plain old conflict are driven by resource scarcity.

A likely response to increasing resource scarcity (manifest as economic problems and rising prices) is centralization of power (fascism). Finding better solutions than centralization and war is my life’s work. To this end I’ve worked extensively with government, the military, some large companies and think-tanks – but most of all with the Free and open source community – to solve real problems. Click here if your browser doesn’t support HTML5 video This video me in action at Surviving the Event. Here is a visual index of my activities. The Secret Sun: Conspiracy and Control in the American Twilight.

Ted Torbich invited me onto his delightfully-named podcast The Stench of Truth to discuss current events, as well as the now-apparent horrific effects of a decades-long program to use authoritarian religion as a weapon against the American working and middle classes, particularly those in the so-called 'Heartland' and 'Bible Belt'. 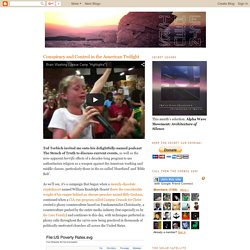 As we'll see, it's a campaign that began when a morally-dissolute cryptofascist named William Randolph Hearst threw the considerable weight of his empire behind an obscure preacher named Billy Graham, continued when a CIA-run program called Campus Crusade for Christ created a phony counterculture based on Fundamentalist Christianity, a counterculture pushed by the entire media industry (but especially so by the Luce Family) and continues to this day, with techniques perfected in phony cults throughout the 1970s now being practiced in thousands of politically-motivated churches all across the United States. Beneath the Rose. Beneath the Rose March 24, 2015 ¶ There is a certain irony in discussing secrecy in the panopticon of the modern world. 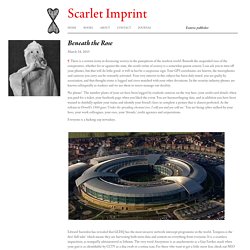 Beneath the suspended rose of the conspirators, whether for or against the state, the occult virtue of secrecy is a somewhat quaint conceit, I can ask you to turn off your phones, but that will do little good: it will in fact be a suspicious sign. The Nightshirt. The Fluffy Pillar And the Spheres. The power of intermittent fasting. Scientists are uncovering evidence that short periods of fasting, if properly controlled, could achieve a number of health benefits, as well as potentially helping the overweight, as Michael Mosley discovered. 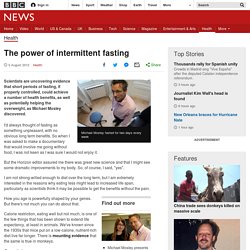 I'd always thought of fasting as something unpleasant, with no obvious long term benefits. So when I was asked to make a documentary that would involve me going without food, I was not keen as I was sure I would not enjoy it. But the Horizon editor assured me there was great new science and that I might see some dramatic improvements to my body. So, of course, I said, "yes". I am not strong-willed enough to diet over the long term, but I am extremely interested in the reasons why eating less might lead to increased life span, particularly as scientists think it may be possible to get the benefits without the pain.

How you age is powerfully shaped by your genes. Growth hormone. Relaxed Focus: Conspiracy facts, not theories. Just read one link, read about Operation Northwoods. 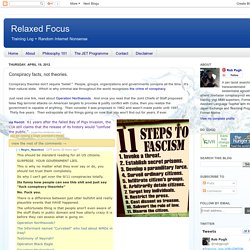 And once you read that the Joint Chiefs of Staff proposed false flag terrorist attacks on American targets to provoke & justify conflict with Cuba, then you realize the government is capable of anything. Then consider it was proposed in 1962 and wasn't made public until 1997. Thirty five years. Quantum Physics came from Vedas: Schrödinger and Einstein read Veda's. In this article we discuss a very brief and simplified history of Quantum Mechanics and will quote what the founding fathers of this branch of science had to say about Vedic influence on the development of their theories. 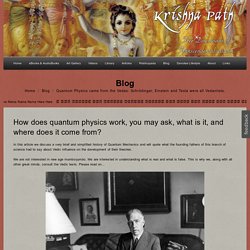