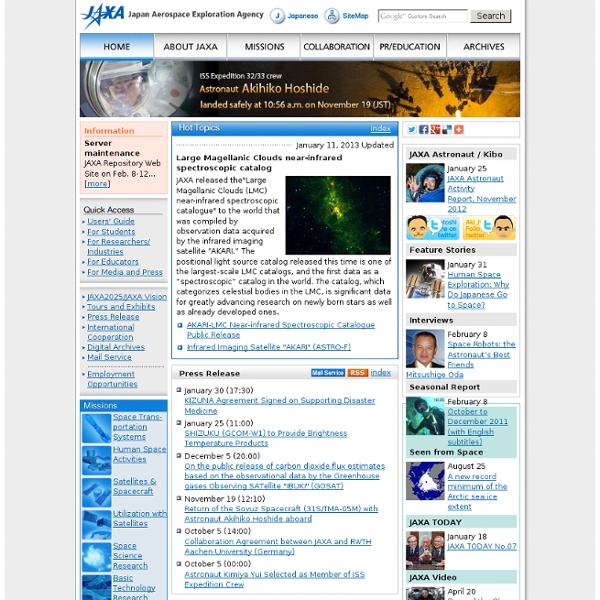 Japan Aerospace Exploration Agency Japan's national aerospace agency The Japan Aerospace Exploration Agency (JAXA) (国立研究開発法人宇宙航空研究開発機構, Kokuritsu-kenkyū-kaihatsu-hōjin Uchū Kōkū Kenkyū Kaihatsu Kikō, literally "National Research and Development Agency on Aerospace Research and Development") is the Japanese national aerospace and space agency. Through the merger of three previously independent organizations, JAXA was formed on 1 October 2003. JAXA is responsible for research, technology development and launch of satellites into orbit, and is involved in many more advanced missions such as asteroid exploration and possible human exploration of the Moon.[3] Its motto is One JAXA[4] and its corporate slogan is Explore to Realize (formerly Reaching for the skies, exploring space).[5]

55 Cancri e 55 Cancri e (abbreviated 55 Cnc e) is an extrasolar planet orbiting the Sun-like star 55 Cancri A. Its mass is about 7.8 Earth masses and its diameter is about twice that of Earth's,[4] thus classifying it as the first Super-Earth discovered around a main sequence star, predating Gliese 876 d by a year. It takes less than 18 hours to complete an orbit and is the innermost known planet in its planetary system. 55 Cancri e was discovered on August 30, 2004. However, until the 2010 observations and recalculations, this planet had been thought to take about 2.8 days to orbit the star.[2] In October 2012, it was announced that 55 Cancri e could be a carbon planet.[5][6]

List of space agencies Russian Space StationMir, back-dropped against the Earth, taken from the NASA's Space Shuttle Atlantis following undocking from the station at the end of STS-71 on the 4th of July, 1995. On the 29th of June, 1995, STS-71 became the first Shuttle mission ever to dock with the station. This is a list of government agencies engaged in activities related to outer space and space exploration. The name given is the English version, with the native language version below. The acronym given is the most common acronym: this can either be the acronym of the English version (e.g. Starry Messenger: Ptolemy Biography In the Syntaxis (or Almagest), Ptolemy (second century A.D.) synthesised mathematical astronomy into a coherent whole which rendered his predecessors obsolete and would dominate Western and Islamic thought until the sixteenth century. He also wrote works on astrology, geography, optics and music. Nothing reliable is known of Claudius Ptolemy's life that cannot be deduced from his surviving works; only a few brief and unsupported biographical statements are made by much later sources. 'Claudius' suggests he held Roman citizenship, 'Ptolemy' that he was of Greek descent and lived in Egypt.

CNES CNES programs[edit] CNES concentrates on five areas:[2] access to spacecivil applications of spacesustainable developmentscience and technology researchsecurity and defence Access to space[edit] Sustainable development[edit] Total Lunar Eclipse Coincides with Winter Solstice Credit: Jim Fakatselis, NASA Can you view it? Cloud cover forecast Click to enlarge Everyone knows that "the moon on the breast of new-fallen snow gives the luster of mid-day to objects below." That is, except during a lunar eclipse.

About CNES Founded in 1961, the Centre National d’Etudes Spatiales (CNES) is the government agency responsible for shaping and implementing France’s space policy in Europe. Credits : CNES Its task is to invent the space systems of the future, bring space technologies to maturity and guarantee France’s independent access to space. History of Constellation and Star Names The illustrations on this page have been compiled from a variety of sources. If advised that copyright has been infringed I will immediately remove the particular illustration(s). Return To Section Index Page G: Greek Constellations 13: Classical Greek constellations Hemisphaerium Boreale