The Art of Insight and Action 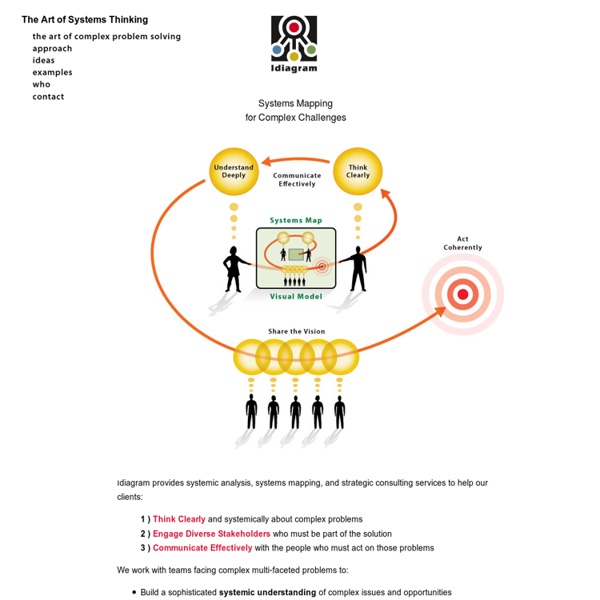 Idiagram provides systemic analysis, systems mapping, and strategic consulting services to help our clients: 1 ) Think Clearly and systemically about complex problems 2 ) Engage Diverse Stakeholders who must be part of the solution 3 ) Communicate Effectively with the people who must act on those problems We work with teams facing complex multi-faceted problems to: Build a sophisticated systemic understanding of complex issues and opportunities Develop broad strategic insight Design more creative solutions Build shared vision, ownership, and enthusiasm Communicate effectively with others Doing these things well, and the synergy of doing them together, can have a profound impact on team knowledge, morale, and coordination. Our approach revolves around the use of systems thinking and systems mapping to facilitate better thinking, communication and coherent action.

50 Great Examples of Data Visualization Wrapping your brain around data online can be challenging, especially when dealing with huge volumes of information. And trying to find related content can also be difficult, depending on what data you’re looking for. But data visualizations can make all of that much easier, allowing you to see the concepts that you’re learning about in a more interesting, and often more useful manner. Below are 50 of the best data visualizations and tools for creating your own visualizations out there, covering everything from Digg activity to network connectivity to what’s currently happening on Twitter.

22 free tools for data visualization and analysis Review April 20, 2011 06:00 AM ET Computerworld - You may not think you've got much in common with an investigative journalist or an academic medical researcher. But if you're trying to extract useful information from an ever-increasing inflow of data, you'll likely find visualization useful -- whether it's to show patterns or trends with graphics instead of mountains of text, or to try to explain complex issues to a nontechnical audience. Want to see all the tools at once? For quick reference, check out our chart listing all the tools profiled here. Clive Thompson on the Power of Visual Thinking Illustration: Posttypography When I went online to shop for a laptop this summer, I faced a blizzard of choices. Was an ultralight worth the price, or would a heavier model do? Did I need a big screen, or would it make the computer a pain to lug around?

Great Visualizers: Always With Honor Design duo Tyler Lang and Elsa Chaves are Always With Honor, an Portland-based design team with a specialty in beautifully simple information displays and iconography. I first got turned on to / by their work when I spotted this awesome poster. It visualizes the many domains within design. The Physiology of . . . Facial Expressions Whether faces can express any more than these seven emotions is a matter of some debate. There could be specific expressions for contentment, excitement, pride, relief, guilt, and shame, Ekman says, but they have yet to be delineated. Individual elements of each expression can occur in varying intensities or may be missing altogether. A look of mild surprise can be shown by the eyes alone, for instance, if the mouth doesn’t move.

Gallery · mbostock/d3 Wiki Wiki ▸ Gallery Welcome to the D3 gallery! More examples are available for forking on Observable; see D3’s profile and the visualization collection. Please share your work on Observable, or tweet us a link! Visual Index Visual thinking guides - Wikit This presents nine sources of visual thinking guides: Exploratree, Gamestorming, LexIcon, Education Oasis, TeacherVision, Freeology, Education Place and Writing Fun. Exploratree hosts a set of interactive thinking guides. This is a free web resource where you can use the guides, print them, edit them or make your own. You can share them and work on them in groups. It is aimed at schools and students, but has ideas for thinkers of all ages.

Fallacy List 1. FAULTY CAUSE: (post hoc ergo propter hoc) mistakes correlation or association for causation, by assuming that because one thing follows another it was caused by the other. example: A black cat crossed Babbs' path yesterday and, sure enough, she was involved in an automobile accident later that same afternoon. example: The introduction of sex education courses at the high school level has resulted in increased promiscuity among teens. A recent study revealed that the number of reported cases of STDs (sexually transmitted diseases) was significantly higher for high schools that offered courses in sex education than for high schools that did not. 2.

Frontiers of Innovation Launched in May 2011, Frontiers of Innovation (FOI) focuses on the work of a community of researchers, practitioners, policymakers, philanthropists, and experts in systems change from across North America. The goal of FOI is to bring about substantially improved outcomes for vulnerable young children whose needs (or whose caregivers' needs) are not being fully met by existing policies and programs. To do that, FOI seeks to spur change in the field by forging cross-sector collaborations that prompt creativity, support experimentation, and foster learning from experience. FOI’s work draws on science, including advances in the biological, behavioral, and social sciences, to: identify reasons why children’s development stays on track or goes off course;devise theories of change about how to produce better outcomes; anddesign and test new intervention approaches and measure their effectiveness in reducing barriers to learning and strengthening lifelong physical and mental health.

Graphical visualization of text similarities in essays in a book The problem A collection of essays is collated for readers with visualizing graphics. The graphics should both serve as a thematic and structural overview of each text, and pose the essay in question in relation to the other essays in the book. They should be both an abbreviation of the text and the key to decoding the complex issues under discussion. The difficulty in developing appropriate graphics arises from the level of discussion of the key themes.

the art of complex problem solving? by coolucka Dec 5