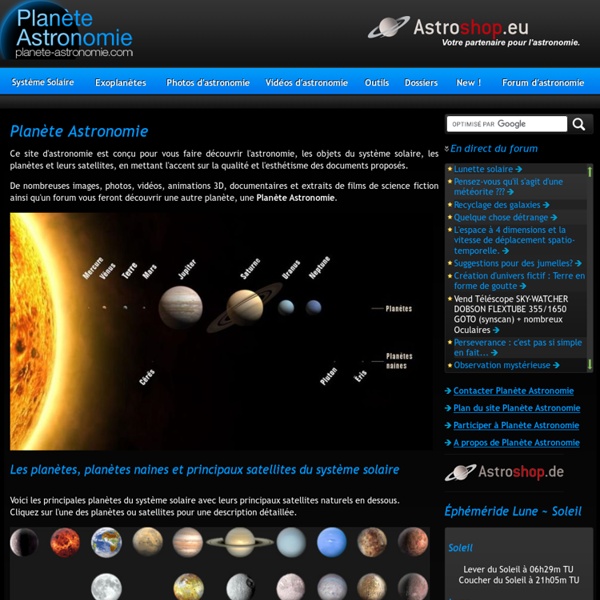 The Outer Planets Image: Jupiter's four biggest moons (from left to right): Ganymede, Callisto, Io, and Europa. “Since, in the long run, every planetary civilization will be endangered by impacts from space, every surviving civilization is obliged to become spacefaring--not because of exploratory or romantic zeal, but for the most practical reason imaginable: staying alive... If our long-term survival is at stake, we have a basic responsibility to our species to venture to other worlds. ” - Carl Sagan Until Voyager reached the outer solar system we knew very little about the planets that inhabited this region of space. What we have discovered over years of exploration has both excited and mystified us.

European Homepage In April of this year, the NASA/ESA Hubble Space Telescope will be celebrating 24 years of observing. To celebrate this milestone, the observatory is releasing a brand new image of part of NGC 2174, otherwise known as the Monkey Head nebula. This new Hubblecast episode showcases this beautiful image, which views a colourful region filled with young stars embedded within bright wisps of cosmic gas and dust. Welcome to the Hubblecast! Hubblecast features news and Images from the NASA/ESA Hubble Space Telescope. Behind the Jet-Propelled Couch Cordwainer Smith & Kirk Allen [Originally published in the New York Review of Science Fiction, May 2002] In 1978 I began to pursue the question of whether Paul Linebarger, aka Cordwainer Smith, had been the patient in “The Jet-Propelled Couch,” a psychoanalytic case history written by Robert Lindner. Over the past quarter-century I’ve accumulated more information and ideas on that question than I can fully present here. Instead I’ll use the format of a FAQ – a list of “frequently asked questions” and fairly brief answers.

Relativistic Cosmology Back to main course page John D. Norton Department of History and Philosophy of Science University of Pittsburgh Einstein's Great Book of Universes The arrival of Einstein's general theory of relativity marked a rebirth of interest and work in cosmology, the study of the universe on the largest scale. Salon des Travailleurs Autonomes Copyright © 1999-2012 GoDaddy.com, LLC. All rights reserved. *One FREE .COM, .CO, .NET or .ORG with purchase of a new 12-, 24- or 36-month website builder plan. Plus ICANN fee of $0.18 per domain name per year. You must add the domain name into your cart before purchase, and you must select a domain term length equal to or less than the term length of your website builder plan to qualify for the free domain offer.

HyperPhysics Concepts About HyperPhysics Rationale for Development HyperPhysics is an exploration environment for concepts in physics which employs concept maps and other linking strategies to facilitate smooth navigation. For the most part, it is laid out in small segments or "cards", true to its original development in HyperCard. The entire environment is interconnected with thousands of links, reminiscent of a neural network. The bottom bar of each card contains links to major concept maps for divisions of physics, plus a "go back" feature to allow you to retrace the path of an exploration.

La Silla La Silla, in the southern part of the Atacama desert, 600 km north of Santiago de Chile and at an altitude of 2400 metres is the home of ESO's original observing site. Here ESO operates two major telescopes: the 3.6m telescope, and the New Technology Telescope (NTT). They are equipped with state of the art instruments either built completely by ESO or by external consortia, with substantial contribution by ESO. La Silla Observatory is hosting regularly Visitor Instruments that are attached to a telescope, for the duration of a run of observation and then is removed from the telescope. La Silla also hosts national telescopes, such as the 2.2-m Max-Planck telescope, 1.2-m Swiss Telescope and the 1.5-m Danish Telescope.