Julian Treasure: How to speak so that people want to listen 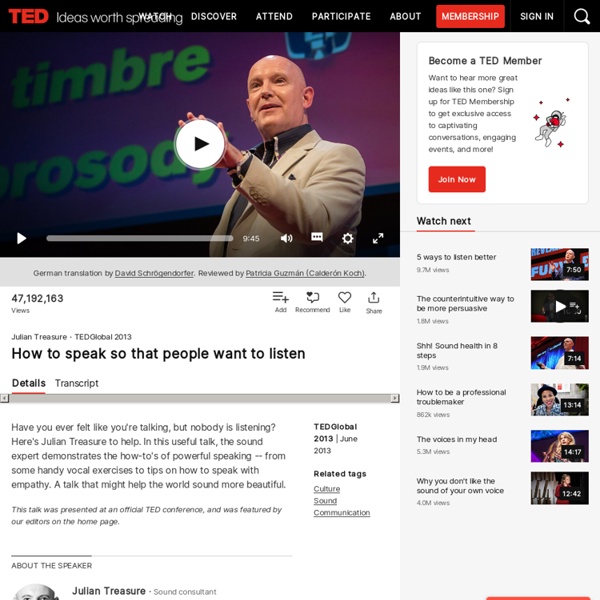 Julian Treasure: How to speak so that people want to listen Have you ever felt like you're talking, but nobody is listening? Here's Julian Treasure to help. In this useful talk, the sound expert demonstrates the how-to's of powerful speaking — from some handy vocal exercises to tips on how to speak with empathy. A talk that might help the world sound more beautiful. This talk was presented at an official TED conference, and was featured by our editors on the home page.

7 Hand Gestures That Make You Look Like a Real Intellectual You’ve definitely seen it at some point. Maybe it was in a lecture in college. Maybe it was in a TED talk you watched recently. Someone is trying to explain some important historical connection, drawing up a grand theory of art or science or human progress, and there it is, as if by reflex: the hand lifts in front of them like an upturned claw, the fingers slowly turning an invisible dial. That’s “The Dialectic,” one of the hand gestures you’ll need to master to become a genuine thought leader. Alice May Williams and Jasmine Johnson observed “the full complement” of these gestures in the process of earning their MFA at Goldsmiths College in London.

A Guide for Young People: What to Do With Your Life By Leo Babauta I had a 15-year-old write to me and ask about figuring out what do do with her life. She writes: ‘As a high-school student I’m constantly being reminded to figure out what to do with my life, what career I would like to have and so on. I definitely feel huge amounts of pressure when my teachers and parents tell me to figure out something now. I’m young and I don’t want to make a mistake and ruin my future. Bravo! How to End a Speech Vividly and Memorably « Back to Blog Posts Bravo! How to End a Speech Vividly and Memorably How good are you at starting and ending your presentations? To engage listeners, influence them, and have them retain your key information, you need a strong opening and closing. 8 Good TED Talks to Help You With Public Speaking Anxiety (Infographic) January 22, 2017 Glossophobia, or fear of public speaking, is a common thing among a large number of adults. There are several reasons that factor in this phobia from social/psychological anxieties to speech pathologies. But regardless of what it is that makes some people shun away from facing an audience, glossophobia can be overcome through self-help (e.g reading books that tackle the problem, watching videos…etc), coaching, or even through direct assistance from professionals. In today’s post, we are sharing with you some excellent tips on how to overcome public speaking anxiety and deliver engaging talks. The tips are scattered across 8 great TED talks and visualized in the infographic below. This visual is created by the folks in Visualistan and we learned about it through Larry Ferlazzo’s Pinterest Page.

Ultimate Ice Breaker? Making & Flying Paper Planes! Zaid Alsagoff , Principal Lead (e-Learning & Innovation) at International Medical University (IMU) Posted 08/31/2015 1:18AM | Last Commented 09/16/2015 5:48PM While watching the movie 'Paper Planes' (in Norway), I was struck by the idea of using Paper Planes as an Ice breaker and/or team building activity. Cheap, easy, fast and fun! Though, after Googling the idea, I quickly realized that it has already been discovered for just that. So, what I am going to share does not warrant a PhD (or an award), but it does have it's own recipe tailored to my taste.

The best advice for public speaking and presentations This article was taken from the October 2015 issue of WIRED magazine. Be the first to read WIRED's articles in print before they're posted online, and get your hands on loads of additional content by subscribing online. Whether it's getting up in front of an audience of 1,000 guests or ten overworked employees, public speaking can be unnerving. Michael Weitz and Abigail Tenembaum, founders of Virtuozo, coach everyone from TED speakers to CEOs to express their message effectively. The Habit Action List By Leo Babauta There are a ton of people who read self-improvement blogs and books, but never put them into action. They engage in what’s sometimes called “self-improvement porn”. I’ve done this myself in the past — it was a form of fantasizing about how I was going to make my life better, get my shit together. But I didn’t take action because: I was too busy right that moment, so I’d bookmark the article for later.

Engaging With Contrary Evidence In researching how best to prepare students for new-media literacy, I’ve come across the term confirmation bias—the tendency that all human beings share to search for or interpret information in a way that supports already held beliefs, and to ignore contrary evidence. It’s something that is hardwired into our brains—our world is too complicated for us to keep testing everything we know. It’s also one of the many cognitive biases that give us fake news and hyperpartisan politics as we learn to ignore evidence and just look for ways to prove ideas that we already hold. So what can we do to help students become critical and independent thinkers, voters who are not victims of manipulative fake news or corrupt politicians? One concrete, practical step toward that goal is to teach students to craft quality argument essays.

A TED speaker coach shares 11 tips for right before you go on stage Gina Barnett advises a speaker before the annual TED Conference. Below, her best last-minute public speaking tips. Photo: Ryan Lash/TED The weekend before a TED conference, each speaker rehearses their talk in the TED theater. It’s a chance for the speakers to get to know the space, for our curators to give last-minute suggestions on talk content, and for our speaker coaches to give advice to help each speaker feel their absolute best the day of their talk. During this time, we overheard speaker coaches Gina Barnett, Michael Weitz and Abigail Tenenbaum give some helpful tips that we’d never heard before.

Four Improv Techniques That Can Help You Communicate Better Have you heard the one about the man who took off his pants in the middle of a corporate training exercise? "That happened once!" says actor Robyn Scott. She’s describing the freewheeling atmosphere integral to the communications workshops she runs for Second City, the improv theater that famously served as a launchpad for some of the biggest names in entertainment, including Tina Fey, Amy Poehler, and Steve Carell.