11 ways you are thoroughly (but interestingly) wrong 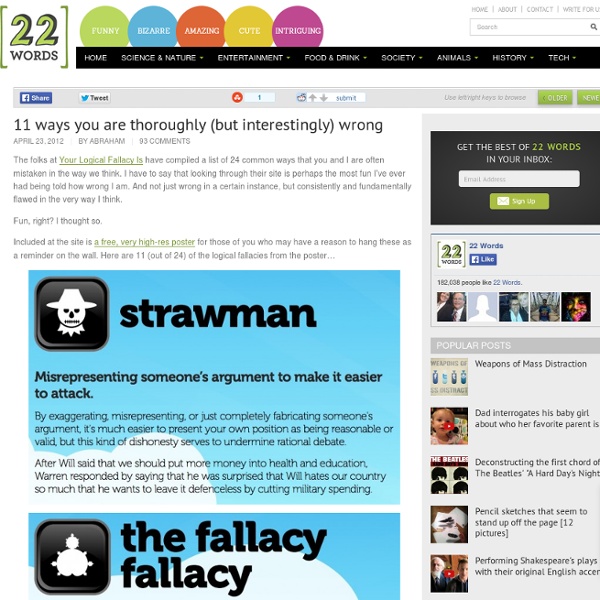 The folks at Your Logical Fallacy Is have compiled a list of 24 common ways that you and I are often mistaken in the way we think. I have to say that looking through their site is perhaps the most fun I’ve ever had being told how wrong I am. And not just wrong in a certain instance, but consistently and fundamentally flawed in the very way I think. Fun, right? Included at the site is a free, very high-res poster for those of you who may have a reason to hang these as a reminder on the wall. (via MetaFilter) Related:  Language, Words, & Meaning

kenopsia The Dictionary of Obscure Sorrows is a compendium of invented words written by John Koenig. Each original definition aims to fill a hole in the language—to give a name to emotions we all might experience but don’t yet have a word for. The author's mission is to capture the aches, demons, vibes, joys and urges that roam the wilderness of the psychological interior. Each sorrow is bagged, tagged and tranquilized, then released gently back into the subconscious. ▸ visit the facebook page to hear the backstory behind each word ▸ follow on twitter (@obscuresorrows) for whatever reason ▸ send me a tumblr message describing emotions you need words for ▸ send me an email via obscuresorrows@gmail.com JOHN KOENIG is a designer and commercial director who lives in St. He is currently writing a book version of The Dictionary of Obscure Sorrows. Copyright © 2013 John Koenig.

25 of the Happiest Words in English At the beginning of this year, Isabel Kloumann and a group of mathematicians at the University of Vermont published a paper on positivity in the English language. They took just over 10,000 of the most frequent English words from a variety of sources (Twitter, Google Books, The New York Times , and music lyrics) and had people rate them on a 9 point scale from least happy to most happy, collecting 50 independent ratings per word. In the resulting dataset, available here , "laughter" comes in at number 1 in perceived happiness, and "terrorist" comes last. So what are the happiest words in English? They might be nice to hear. As you go down the list in a binge of positive word reading, so many of the positive words start to sound crass (rich, diamonds, glory), treacly (butterflies, cupcakes, friends), or too obvious (positive, great, wonderful). Your favorite word—go!

13 Little-Known Punctuation Marks We Should Be Using Because sometimes periods, commas, colons, semi-colons, dashes, hyphens, apostrophes, question marks, exclamation points, quotation marks, brackets, parentheses, braces, and ellipses won't do. 1. Interrobang You probably already know the interrobang, thanks to its excellent moniker and increasing popularity. 2. The backward question mark was proposed by Henry Denham in 1580 as an end to a rhetorical question, and was used until the early 1600s. 3. It looks a lot like the percontation point, but the irony mark's location is a bit different, as it is smaller, elevated, and precedes a statement to indicate its intent before it is read. 4. Among Bazin's proposed new punctuation was the love point, made of two question marks, one mirrored, that share a point. 5. Bazin described this mark as "the stylistic representation of those two little flags that float above the tour bus when a president comes to town." 6. Need to say something with unwavering conviction? 7. 8. 9. 10. 11. 12 & 13.

The Russian language enters a new world Perestroika turned the language norms in Russia upside down. But now more traditional forces are reclaiming the Russian language. (Photo: Colourbox) New media technology has changed communication and language worldwide. In Russia, the technological revolution has taken place in an era of dramatic political and social change, with an even bigger impact on the Russian language. "Following Perestroika and the newfound transparency, language norms were challenged and transformed. Technological revolution Lunde is professor of Russian at the University of Bergen (UiB) and heads the research project The Future of Russian: Language Culture in the Era of New Technology. "It is a vast field. "Internet language is our main focus of research. From order to chaos Professor Ingunn Lunde is head of the Future of Russian research project. In the Soviet era, before technological advances gained momentum, the Russian language was subject to a rigorous doctrine, and most writing followed codified standards.

Language designed for thinking Are humans born with an “internal” grammar, an innate ability to know what is right and wrong in language? (Illustration photo: Coloubox) All languages consist of a basic structure of verb and noun. "But the meaning of the words differs widely. “Each expression should have one and only one meaning. Svenonius believes that this confirms that language was not created for the goal of communicating; rather, language was created for use in thinking. Vast capacity for learning languages Already at birth, human children are endowed with an exceptional ability, fundamentally different from other new-born creatures: they possess a vast capacity for language learning. At a stage when its development in many areas remains minimal, a child is capable of understanding complicated language structures. This miracle of learning inspired linguists in Tromsø to seek a deeper understanding into human language. Language is in the details “How do children know when they are supposed to use the one or the other?

The new face of Nordic profanities English swearwords and insults such as fucking, shit and motherfucker are eating their way into the Scandinavian languages. Not only in graffiti and street art, but also in the media. (Photo: Kissmama) Nordic youths use swearwords that refer to faeces and sex, while older people stick to profanities related to religion. But there’s virtually no difference in how much the two generation swear, explained language researcher Marianne Rathje when she presented her research at the Symposium on Swearing in the Nordic Countries, held in Copenhagen earlier this month. ”We’re dealing with a shift in the use of swear words,” she said. Her research into how the different generations use the language shows that the young generations have replaced a lot of the old swearwords such as ‘For fanden’ and ‘Satans’ (both diabolical in nature) with new ones about the nether regions. We curse more when we’re with peers Marianne Rathje Facking is satisfying in Sweden Kristy Beers-Fägersten Source: Sproget.dk

English is a Scandinavian language William:I promise to never do it again. Kate: This we have talked about. The sentence structure in Middle English - and thus also Modern English - is Scandinavian and not Western Germanic. (Illustration: Hanne Utigard) Researchers now believe they can prove that English is in reality a Scandinavian language, which means that it belongs to the Northern Germanic language group, just like Norwegian, Danish, Swedish, Icelandic and Faroese. This breaks with what other language researchers and the rest of the world believe: that English descends directly from Old English or Anglo-Saxon, that it is a West Germanic language, which the Angles and Saxons brought with them from Northern Germany and Southern Jylland when they settled in the British Isles in the fifth century. "Have you considered how easy it is for Norwegians to learn English?" "Obviously there are many English words that resemble ours. Old English died out The language changed a great deal in the period after the Normans arrived.

Sign Language Researchers Broaden Science Lexicon For deaf students, this game of scientific Password has long been the daily classroom and laboratory experience. Words like “organism” and “photosynthesis” — to say nothing of more obscure and harder-to-spell terms — have no single widely accepted equivalent in sign language. This means that deaf students and their teachers and interpreters must improvise, making it that much harder for the students to excel in science and pursue careers in it. “Often times, it would involve a lot of finger-spelling and a lot of improvisation,” said Matthew Schwerin, a physicist with the Food and Drug Administration who is deaf, of his years in school. Now thanks to the Internet — particularly the boom in online video — resources for deaf students seeking science-related signs are easier to find and share. The signs were developed by a team of researchers at the center, a division of the University of Edinburgh in Scotland that develops learning tools for students with visual and auditory impairments.

From 'JK' To 'Eye Gunk': Taking U.S. Slang To China hide captionIn one video on her hit video blog OMG! Meiyu, Jessica Beinecke teaches slang terms like "BTW," "JK" and "whatev." OMGMeiyu YouTube Channel In one video on her hit video blog OMG! One of the most well-known American women in China is someone many Americans have never heard of. Beinecke's fun, offbeat videos have racked up more than 15 million views over the past year — on YouTube and other Chinese social media sites. "American English slang can be pretty ... funny at times," she tells NPR's Neal Conan. Each week, Beinecke asks followers on Weibo — the Chinese version of Twitter — what words or expressions they would like to learn. "They get a lot of access to American culture," she says, "but we just sort of help them make sense of it and pick out some key words that young Americans actually use on a daily basis." OMGmeiyu YouTube Channel/YouTube In the segment "Yucky Gunk," Beinecke explains "all of the icky stuff that comes out of your face."

New XO Attempting To Stamp Out Misuse of Word ‘Literally’ FORT BLISS, TEXAS – Major Sean O’Sullivan, the new executive officer of 1-42 Air Defense Artillery Battalion, has made it his primary mission in life to stamp out the misuse of the word “literally” among his staff officers and subordinate leaders within the battalion. O’Sullivan’s first salvo in this campaign came last Tuesday in the form of a signed and scanned memorandum sent to all 1-42 ADA staff officers and company commanders, with both the battalion and brigade commanders carbon copied. The memorandum went into some detail on how the XO saw an increase in the misuse of the word “literally” throughout the formation and encouraged all battalion personnel to avoid using it “in e-mails, military memos, or even off-duty hours if [they] do not know how to use it properly.” In the memo’s next paragraph, O’Sullivan writes: “I recently heard a battery commander during a safety brief say, ‘You guys need to stay safe. Like, literally, this is very important to me and the first sergeant.’