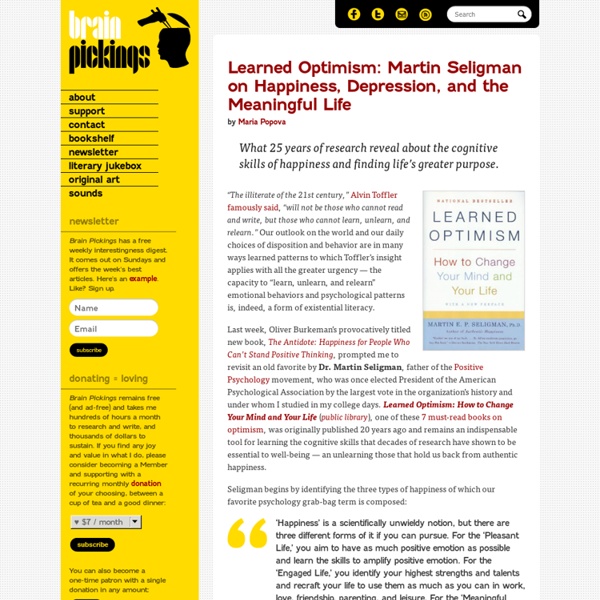 by Maria Popova What 25 years of research reveal about the cognitive skills of happiness and finding life’s greater purpose. “The illiterate of the 21st century,” Alvin Toffler famously said, “will not be those who cannot read and write, but those who cannot learn, unlearn, and relearn.” Last week, Oliver Burkeman’s provocatively titled new book, The Antidote: Happiness for People Who Can’t Stand Positive Thinking, prompted me to revisit an old favorite by Dr. Seligman begins by identifying the three types of happiness of which our favorite psychology grab-bag term is composed: ‘Happiness’ is a scientifically unwieldy notion, but there are three different forms of it if you can pursue. He then defines optimism and pessimism, pointing out the challenge to self-identify as either, and offers a heartening, heavily researched reassurance: The optimists and the pessimists: I have been studying them for the past twenty-five years. Optimism is invaluable for the meaningful life. Donating = Loving

World Map For 40 Years, This Russian Family Was Cut Off From All Human Contact, Unaware of WWII Siberian summers do not last long. The snows linger into May, and the cold weather returns again during September, freezing the taiga into a still life awesome in its desolation: endless miles of straggly pine and birch forests scattered with sleeping bears and hungry wolves; steep-sided mountains; white-water rivers that pour in torrents through the valleys; a hundred thousand icy bogs. This forest is the last and greatest of Earth’s wildernesses. It stretches from the furthest tip of Russia’s arctic regions as far south as Mongolia, and east from the Urals to the Pacific: five million square miles of nothingness, with a population, outside a handful of towns, that amounts to only a few thousand people. When the warm days do arrive, though, the taiga blooms, and for a few short months it can seem almost welcoming. It is then that man can see most clearly into this hidden world–not on land, for the taiga can swallow whole armies of explorers, but from the air. She will not leave. Anon.

September | 2012 | PANACEA The Buddha was sitting under a tree talking to his disciples when a man came and spit on his face. He wiped it off, and he asked the man, “What next? What do you want to say next?” The man was a little puzzled because he himself never expected that when you spit on somebody’s face, he will ask, “What next?” Buddha’s disciples became angry, they reacted. Buddha said, “You keep silent. “If you think on it deeply,” Buddha said, “he has spit on his own mind. The man was even more puzzled! Puzzled, confused, the man returned home. The next morning he was back there. The man looked at Buddha and said, “Forgive me for what I did yesterday.” Buddha said, “Forgive? “And you also are new. Like this: Like Loading...

Eight Habits that Improve Cognitive Function Digital games are incapable of giving the entire brain a full workout. These digital programs can't really exercise the cerebellum (Latin: "Little Brain") and, therefore, are literally only training half your brain. These "brain-training workouts" are the equivalent of only ever doing upper body workouts, without ever working out your lower body. Although the cerebellum is only 10 percent of brain volume, it houses over 50 percent of the brain's total neurons. Brain-Training Games Increase Sedentary Screen Time In the recent New York Times article, Tara Parker-Pope concludes that, “While there is no real risk to participating in the many unproven brain-training games available online and through smartphones, experts say, consumers should know that the scientific jury is still out on whether they are really boosting brain health or just paying hundreds of dollars to get better at a game.” Eight Habits that Improve Cognitive Function 1. 2. 3. 4. 5. 6. 7. 8.

Humans of New York Teaching ate me alive It wasn’t one single incident that made me quit teaching in a public middle school. It was the steady, moldy accumulation of dehumanizing, lifeless, squalid misadventures of which I was a part. Like that time with “Carlos,” to pick an incident more or less at random. I can’t even remember what it was that happened between Carlos and me. Anger, impatience, frustration, stupidity — and that was just me. The next day I saw my friend the Dean of Students. My friend the Dean of Students had diplomatically suggested that Carlos’ father and a couple of his uncles accompany him to his office, where the matter could be discussed at leisure. “Mission accomplished,” I said. So, I have to leave the Los Angeles Unified School District. The end of winter break came last January, and my wife saw the state I was in, and she said, “You’re not going back.” In the final analysis, I’m too sensitive for a public, inner city, “high-needs” middle school. That was not what I had envisioned. But, heck!

What are Life Skills? | Skills You Need The term ‘Life Skills’ refers to the skills you need to make the most out of life. Life skills are usually associated with managing and living a better quality of life. They help us to accomplish our ambitions and live to our full potential. Any skill that is useful in your life can be considered a life skill. Here at Skills You Need you'll find lots of information about life skills and life skill development. Essential Life Skills There is no definitive list of life skills. Different life skills will be more or less relevant at different times your life, for example: When at school or university, you'll need study skills When buying a house, negotiation skills may be needed You'll need to work on your employability skills to get a job When you have a job, leadership and presentation skills may be useful, along with a whole host of other skills. However... Perhaps the most important life skill is the ability and willingness to learn. See our pages: What is Learning? Personal Skills

Positive Psychology Resources, Happiness, Tips and Techniques Eight Steps Towards a More Satisfying Life Sonja Lyubomirsky, University of California. This is more of a ?summary? Count your blessingsKeep a ?