An Antidote to the Age of Anxiety: Alan Watts on Happiness and How to Live with Presence 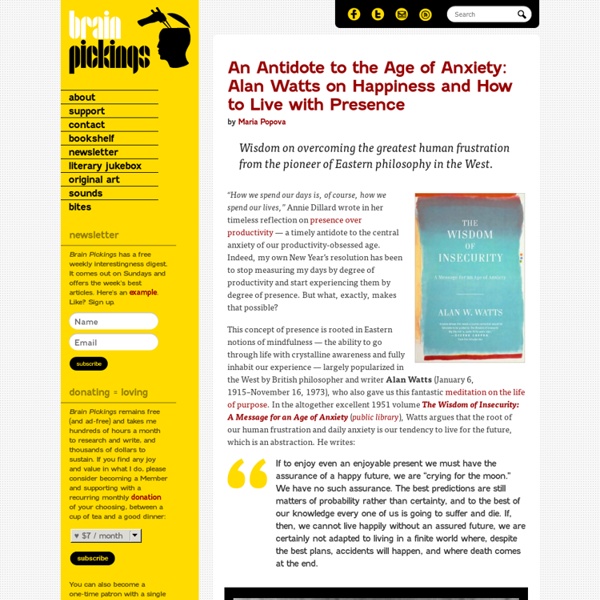 by Maria Popova Wisdom on overcoming the greatest human frustration from the pioneer of Eastern philosophy in the West. “How we spend our days is, of course, how we spend our lives,” Annie Dillard wrote in her timeless reflection on presence over productivity — a timely antidote to the central anxiety of our productivity-obsessed age. Indeed, my own New Year’s resolution has been to stop measuring my days by degree of productivity and start experiencing them by degree of presence. But what, exactly, makes that possible? This concept of presence is rooted in Eastern notions of mindfulness — the ability to go through life with crystalline awareness and fully inhabit our experience — largely popularized in the West by British philosopher and writer Alan Watts (January 6, 1915–November 16, 1973), who also gave us this fantastic meditation on the life of purpose. If to enjoy even an enjoyable present we must have the assurance of a happy future, we are “crying for the moon.” Thanks, Ken

Related:  Mindfulness • Meaning and Happiness • Advice from the Experts • Brain • POOL: Books and other Resources

Banned TED Talk: Graham Hancock – The War on Consciousness Yet another TED talk banned by the TED community due to the challenge it poses to mainstream science. The talk was done at a TEDx conference and aired on the TEDx YouTube channel for a period of time before it was removed due to its content. After personally listening to this talk it is quite clear why it was censored. It isn’t that it explores faulty information or even offensive topics, it is simply that it explores a topic that is greatly feared by mainstream medicine and science. Graham brings light to the war on consciousness that exists in our modern society, especially in the western world. You too can be happy. Really. A Q&A with Shawn Achor Photo courtesy TEDxBloomington. “We think we have to be successful, then we’ll be happier. But the real problem is our brains work in the opposite order,” said Shawn Achor in his charming, immensely popular TED Talk from TEDxBloomington, “The happy secret to better work.” Achor is the CEO of consulting firm Good Think, which conducts research on positive psychology and helps people apply it to be happier and more effective at work.

3 Things Mindfulness is Not. ~ Ruth Lera Via Ruth Leraon Apr 18, 2014 The experience of practicing mindfulness or meditation is one that is most often beyond words. There is an elusive quality to touching into the moment—and only this moment—that is hard to describe, perhaps impossible. theconversation Australian government policy and happiness research are pointing in very different directions. A prime goal of government policy is economic growth. Many Australians go along with this, assuming that more money will make them happier. However, policy and common belief need to confront an increasing body of research that suggests a different approach to improving well-being. In the past couple of decades, research on happiness has boomed. The word “happiness” sometimes suggests fleeting pleasures like laughing at a joke or eating an ice cream, so researchers often use terms like well-being, life satisfaction or flourishing to indicate the deeper, more long-lasting aspect of happiness.

Pixar Cofounder Ed Catmull on Failure and Why Fostering a Fearless Culture Is the Key to Groundbreaking Creative Work by Maria Popova Why the greatest enemy of creative success is the attempt to fortify against failure. “Make New Mistakes. Make glorious, amazing mistakes. Make mistakes nobody’s ever made before,” Neil Gaiman urged in his commencement-address-turned-manifesto-for-the-creative life. “The chief trick to making good mistakes is not to hide them — especially not from yourself,” philosopher Daniel Dennett asserted in his magnificent meditation on the dignity and art-science of making mistakes.

The Brain on Trial Advances in brain science are calling into question the volition behind many criminal acts. A leading neuroscientist describes how the foundations of our criminal-justice system are beginning to crumble, and proposes a new way forward for law and order. On the steamy first day of August 1966, Charles Whitman took an elevator to the top floor of the University of Texas Tower in Austin. The 25-year-old climbed the stairs to the observation deck, lugging with him a footlocker full of guns and ammunition. At the top, he killed a receptionist with the butt of his rifle.

Students' experience of learning in a virtual classroom International Journal of Education and Development using Information and Communication Technology (IJEDICT), 2014, Vol. 10, Issue 4, pp. 93-101 Students’ experiences of learning in a virtual classroom Dilani S. P. Trying Not to Try: How to Cultivate the Paradoxical Art of Spontaneity Through the Chinese Concept of Wu-Wei by Maria Popova “Our modern conception of human excellence is too often impoverished, cold, and bloodless. Success does not always come from thinking more rigorously or striving harder.”