Kierkegaard on Our Greatest Source of Unhappiness 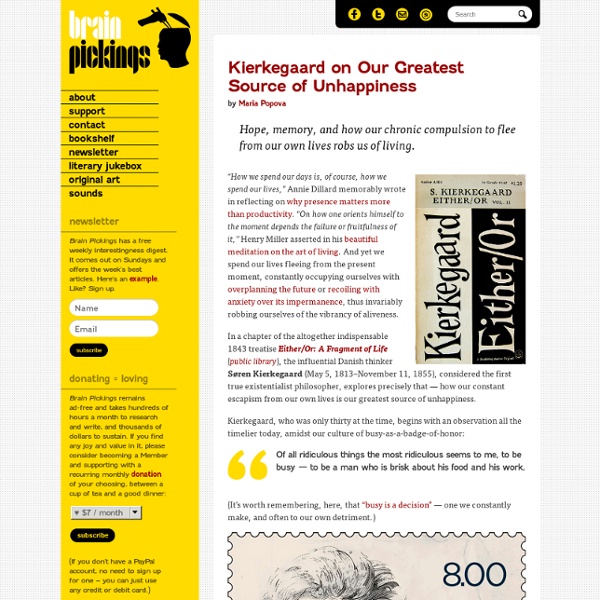 by Maria Popova Hope, memory, and how our chronic compulsion to flee from our own lives robs us of living. “How we spend our days is, of course, how we spend our lives,” Annie Dillard memorably wrote in reflecting on why presence matters more than productivity. “On how one orients himself to the moment depends the failure or fruitfulness of it,” Henry Miller asserted in his beautiful meditation on the art of living. And yet we spend our lives fleeing from the present moment, constantly occupying ourselves with overplanning the future or recoiling with anxiety over its impermanence, thus invariably robbing ourselves of the vibrancy of aliveness. Kierkegaard, who was only thirty at the time, begins with an observation all the timelier today, amidst our culture of busy-as-a-badge-of-honor: Of all ridiculous things the most ridiculous seems to me, to be busy — to be a man who is brisk about his food and his work. The unhappy one is absent. Consider first the hoping individual. Donating = Loving

Related:  Meaning and Happiness • On Being Human • Wise

How We Know What We Know: The Art of Adaequatio and Seeing with the Eye of the Heart by Maria Popova A timeless guide to “understanding the truth that does not merely inform the mind but liberates the soul.” “What is essential is invisible to the eye,” Antoine de Saint-Exupéry memorably wrote in The Little Prince. A Guide for the Perplexed: Mapping the Meaning of Life and the Four Levels of Being by Maria Popova How to harness the uniquely human power of “consciousness recoiling upon itself.” “Never to get lost is not to live, not to know how to get lost brings you to destruction,” Rebecca Solnit wrote in her sublime meditation on how the art of getting lost helps us find ourselves, “and somewhere in the terra incognita in between lies a life of discovery.” But the maps we use to navigate that terra incognita — maps bequeathed to us by the dominant beliefs and standards of our culture — can often lead us further from ourselves rather than closer, leaving us discombobulated rather than oriented toward the true north of our true inner compass.

Meaning Is Healthier Than Happiness - Emily Esfahani Smith Health People who are happy but have little-to-no sense of meaning in their lives have the same gene expression patterns as people who are enduring chronic adversity. Please consider disabling it for our site, or supporting our work in one of these ways Subscribe Now > Helen Keller on Optimism by Maria Popova “Doubt and mistrust are the mere panic of timid imagination, which the steadfast heart will conquer, and the large mind transcend.” Decades before the dawn of the positive psychology movement and a century before what neuroscience has taught us about the benefits of optimism, Helen Keller — the remarkable woman who grew up without sight and hearing until, with the help of her teacher Annie Sullivan, she learned to speak, read, write, and inhabit the life of the mind with such grace and fierceness that made her one of history’s most inspired intellectual heroes — penned a timeless treatise on optimism as a philosophy of life. Simply titled Optimism (public library; public domain), it was originally published in 1903 and written — a moment of pause here — after Keller learned to write on a grooved board over a sheet of paper, using the grooves and the end of her index pencil to guide her writing. Once I knew only darkness and stillness.

There's More to Life Than Being Happy - Emily Esfahani Smith "It is the very pursuit of happiness that thwarts happiness." In September 1942, Viktor Frankl, a prominent Jewish psychiatrist and neurologist in Vienna, was arrested and transported to a Nazi concentration camp with his wife and parents. Three years later, when his camp was liberated, most of his family, including his pregnant wife, had perished -- but he, prisoner number 119104, had lived. In his bestselling 1946 book, Man's Search for Meaning, which he wrote in nine days about his experiences in the camps, Frankl concluded that the difference between those who had lived and those who had died came down to one thing: Meaning, an insight he came to early in life. When he was a high school student, one of his science teachers declared to the class, "Life is nothing more than a combustion process, a process of oxidation." Frankl jumped out of his chair and responded, "Sir, if this is so, then what can be the meaning of life?"

Chief Seattle's Speech The son of the white chief says his father sends us greetings of friendship and good will. This is kind, for we know he has little need of our friendship in return, because his people are many. They are like the grass that covers the vast prairies, while my people are few, and resemble the scattering trees of a storm-swept plain. Whitman Illuminated: “Song of Myself,” in Breathtaking Illustrations by Artist Allen Crawford by Maria Popova “He exalted the nature around and within us. His work is an expression of primal joy: He celebrated our animal senses, and the pleasures of being alive.” What Writing Has in Common With Happiness By Heart is a series in which authors share and discuss their all-time favorite passages in literature. See entries from Jonathan Franzen, Amy Tan, Khaled Hosseini, and more. The final line of an enigmatic Jorge Luis Borges poem became the title for Yasmina Reza's latest book, Happy Are the Happy.

No homework in Finland. See this hat? Tis' my cat. SCORE 135 the creation of the internet SCORE 148 Whatever You Are, Be a Good One by Maria Popova From Tolstoy to Tumblr, a compendium of timeless wisdom on life. In March of 1884, Leo Tolstoy resolved in his diary to create a “circle of reading” for himself, probing “the great philosophers of all time and all people” for wisdom on how to live well.

Effort Is Not the Enemy of Compassion - Leslie Jamison My job title is medical actor, which means I play sick. I get paid by the hour. Medical students guess my maladies. Diamond Ring Earth Game Series These acronyms have been generated to further present the assertions made about the, "Tetraheteromodocracy," at this Web site. They represent how the Tetraheteromodocracy's factions' dictates might be viewed as being related to one's own particular activities. The reason for generating the DR?GS acronyms is to highlight the possibility that the activities of one's life among the present set of circumstances might turn out better if they were to be supported (worked with) more than if they were to be neglected. Diamond / Ring