A Guide for the Perplexed: Mapping the Meaning of Life and the Four Levels of Being 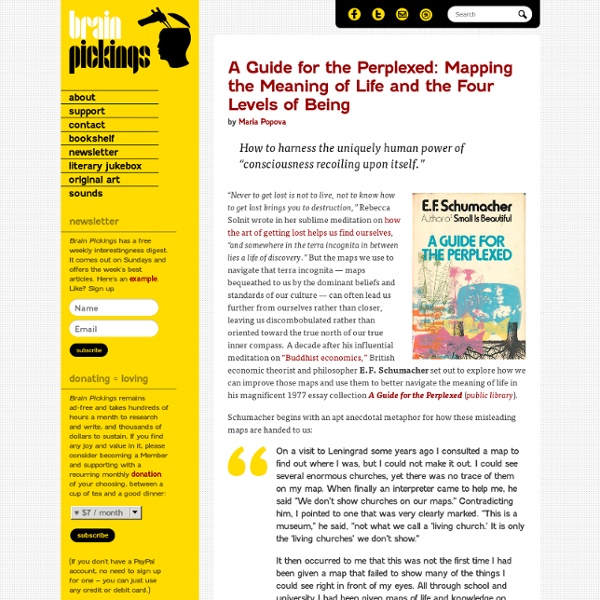 by Maria Popova How to harness the uniquely human power of “consciousness recoiling upon itself.” “Never to get lost is not to live, not to know how to get lost brings you to destruction,” Rebecca Solnit wrote in her sublime meditation on how the art of getting lost helps us find ourselves, “and somewhere in the terra incognita in between lies a life of discovery.” But the maps we use to navigate that terra incognita — maps bequeathed to us by the dominant beliefs and standards of our culture — can often lead us further from ourselves rather than closer, leaving us discombobulated rather than oriented toward the true north of our true inner compass. Schumacher begins with an apt anecdotal metaphor for how these misleading maps are handed to us: On a visit to Leningrad some years ago I consulted a map to find out where I was, but I could not make it out. Map of Palmanova, from Umberto Eco's 'Legendary Lands.' 'Isle of Knowledge' by Marian Bantjes. We cannot say: “Hold it! Donating = Loving Related:  On Being Human

Kierkegaard on Our Greatest Source of Unhappiness by Maria Popova Hope, memory, and how our chronic compulsion to flee from our own lives robs us of living. “How we spend our days is, of course, how we spend our lives,” Annie Dillard memorably wrote in reflecting on why presence matters more than productivity. “On how one orients himself to the moment depends the failure or fruitfulness of it,” Henry Miller asserted in his beautiful meditation on the art of living. And yet we spend our lives fleeing from the present moment, constantly occupying ourselves with overplanning the future or recoiling with anxiety over its impermanence, thus invariably robbing ourselves of the vibrancy of aliveness. Kierkegaard, who was only thirty at the time, begins with an observation all the timelier today, amidst our culture of busy-as-a-badge-of-honor: Of all ridiculous things the most ridiculous seems to me, to be busy — to be a man who is brisk about his food and his work. The unhappy one is absent. Consider first the hoping individual. Donating = Loving

There's More to Life Than Being Happy - Emily Esfahani Smith "It is the very pursuit of happiness that thwarts happiness." In September 1942, Viktor Frankl, a prominent Jewish psychiatrist and neurologist in Vienna, was arrested and transported to a Nazi concentration camp with his wife and parents. Three years later, when his camp was liberated, most of his family, including his pregnant wife, had perished -- but he, prisoner number 119104, had lived. In his bestselling 1946 book, Man's Search for Meaning, which he wrote in nine days about his experiences in the camps, Frankl concluded that the difference between those who had lived and those who had died came down to one thing: Meaning, an insight he came to early in life. When he was a high school student, one of his science teachers declared to the class, "Life is nothing more than a combustion process, a process of oxidation." Frankl jumped out of his chair and responded, "Sir, if this is so, then what can be the meaning of life?" Viktor Frankl [Herwig Prammer/Reuters] Peter Andrews/Reuters

Meaning Is Healthier Than Happiness - Emily Esfahani Smith Health People who are happy but have little-to-no sense of meaning in their lives have the same gene expression patterns as people who are enduring chronic adversity. Please consider disabling it for our site, or supporting our work in one of these ways Subscribe Now > For at least the last decade, the happiness craze has been building. One of the consistent claims of books like these is that happiness is associated with all sorts of good life outcomes, including — most promisingly — good health. But a new study, just published in the Proceedings of the National Academy of Sciences (PNAS) challenges the rosy picture. Of course, it’s important to first define happiness. It seems strange that there would be a difference at all. "Happiness without meaning characterizes a relatively shallow, self-absorbed or even selfish life, in which things go well, needs and desire are easily satisfied, and difficult or taxing entanglements are avoided," the authors of the study wrote.

What Writing Has in Common With Happiness By Heart is a series in which authors share and discuss their all-time favorite passages in literature. See entries from Jonathan Franzen, Amy Tan, Khaled Hosseini, and more. The final line of an enigmatic Jorge Luis Borges poem became the title for Yasmina Reza's latest book, Happy Are the Happy. Happy Are the Happy features 18 different narrators, each of whom gets to command the reader's attention for at least one chapter. Reza’s books—novels, plays, and an unorthodox book-length profile of Nicolas Sarkozy—have been translated into more than 30 languages. She lives in Paris and spoke to me in New York City. Yasmina Reza: Late in the process of finishing my new book, Happy Are the Happy, I started looking for a title. I was on a plane when the French phrase heureux les heureux, happy are the happy, came to mind. So when I went home, I took all my Borges off the shelf. Happy are those who are beloved, and those who love, and those who are without love. And we can never know.

Effort Is Not the Enemy of Compassion - Leslie Jamison My job title is medical actor, which means I play sick. I get paid by the hour. Medical students guess my maladies. Medical acting works like this: You get a script and a paper gown. My specialty case is Stephanie Phillips, a 23-year-old who suffers from something called conversion disorder. STEPHANIE PHILLIPS Psychiatry SP Training Materials CASE SUMMARY: You are a 23-year-old female patient experiencing seizures with no identifiable neurological origin. We test second- and third-year medical students in topical rotations: pediatrics, surgery, psychiatry. A student might have to sit across from a delusional young lawyer and tell him that when he feels a writhing mass of worms in his small intestine, the feeling is probably coming from somewhere else. Once the 15-minute encounter has ended, the medical student leaves the room, and I fill out an evaluation of his/her performance. Some med students get nervous during our encounters. Empathy means realizing no trauma has discrete edges.

Why 'Things Fitting Perfectly Into Other Things' Is So Satisfying Oh! Why, hello. I didn't see you there. Come, come—sit down by the warm glow of the computer and let me spin you a yarn. See, once upon a time, I had a raincoat. I was careless with my comfort; what comes unexpectedly can all too easily slip away. But why would it even be interesting—let alone soothing—that two random, unrelated items could be physically combined? “I think it has to do with a new way of putting things together in a surprising, novel, and exciting way. The unusualness of the combination might grab the attention, but it’s also how extreme the coincidence of a perfect fit is. It’s the sort of little joy that can’t be forced, only discovered. In its bringing of order to randomness, “Things Fitting Perfectly Into Other Things” is a spiritual sibling to another popular Tumblr, “Things Organized Neatly,” which specializes in photos of objects arranged in patterns by size, color, type, or shape, laid out in tidy rows and columns.

Story of My Life: How Narrative Creates Personality In Paul Murray's novel Skippy Dies, there’s a point where the main character, Howard, has an existential crisis.“‘It’s just not how I expected my life would be,'" he says. “‘What did you expect?’” “Howard ponders this. But it's not stupid at all. “Life stories do not simply reflect personality. In the realm of narrative psychology, a person’s life story is not a Wikipedia biography of the facts and events of a life, but rather the way a person integrates those facts and events internally—picks them apart and weaves them back together to make meaning. “Sometimes in cases of extreme autism, people don’t construct a narrative structure for their lives,” says Jonathan Adler, an assistant professor of psychology at Olin College of Engineering, “but the default mode of human cognition is a narrative mode.” When people tell others about themselves, they kind of have to do it in a narrative way—that’s just how humans communicate. It’s hardly a simple undertaking. But agency sure does.

Everything Doesn't Happen For A Reason — Tim Lawrence I emerge from this conversation dumbfounded. I've seen this a million times before, but it still gets me every time. I’m listening to a man tell a story. A woman he knows was in a devastating car accident; her life shattered in an instant. She now lives in a state of near-permanent pain; a paraplegic; many of her hopes stolen. He tells of how she had been a mess before the accident, but that the tragedy had engendered positive changes in her life. And then he utters the words. Everything happens for a reason. That's the kind of bullshit that destroys lives. It is amazing to me that so many of these myths persist—and that is why I share actionable tools and strategies to work with your pain in my free newsletter. You know exactly what I'm talking about. Grief is brutally painful. So I’m going to repeat a few words I’ve uttered countless times; words so powerful and honest they tear at the hubris of every jackass who participates in the debasing of the grieving: They can only be carried.

Related:
Related:  On Being Human